So who watched the eclipse over North America yesterday? Here in Ireland the only eclipse I saw was the sun completely disappearing behind a big old rain cloud.

To make up for the lack of solar showmanship, I went looking through my travel photos for things shrouded by something else, starting off with a partial view of Rome from behind the orange trees on the balcony of the apartment I was staying in.

Still in Rome, an extraordinary view of three nations, hidden behind one locked door. The only way to view it is through a tiny keyhole high up on the Aventine.

The man behind this mask is the Master of Ceremonies for the annual and ancient Festival of Following the Wren which takes place in Sandyford on the day after Christmas Day. (It’s also celebrated in other places around Ireland, most notably in Dingle). 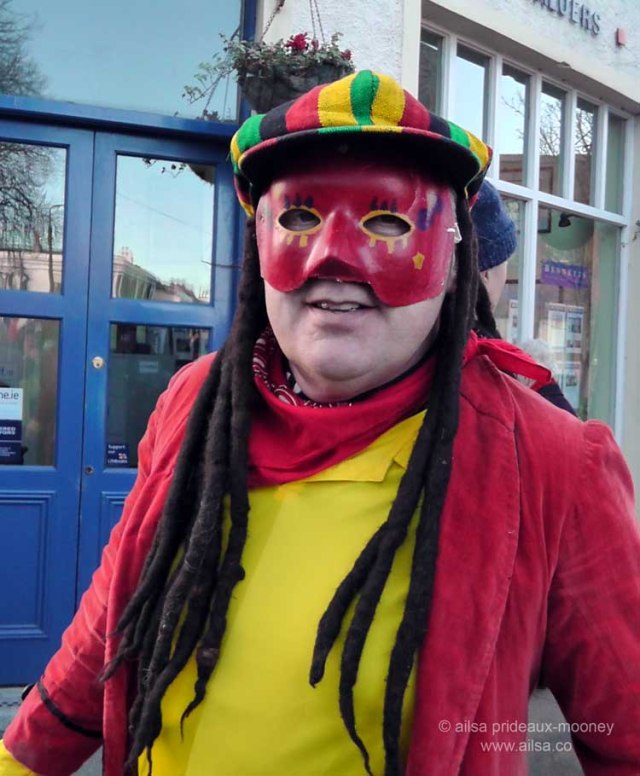 Girl almost out of sight behind all the tulips at the Skagit Valley Tulip Festival.

Impromptu concert behind an archway on the High Line promenade in New York.

I hope you’ll get behind this week’s theme and add your own interpretation (including some eclipse photos if you have them!) If you would like to join in (everyone’s welcome!) here’s what to do:

Every heart that has beat strongly and cheerfully has left a hopeful impulse behind it in the world, and bettered the tradition of mankind. – Robert Louis Stevenson

The artist, like the God of the creation, remains within or behind or beyond or above his handiwork, invisible, refined out of existence, indifferent, paring his fingernails. – James Joyce

27 Responses to Travel theme: Behind