On the road from Waterford to Cork, between Castlemartyr and Midleton, there lies a lake by the name of Loughaderra. It’s a popular spot with anglers and birdwatchers alike, and locals have given it the nickname Swan Lake. I found out why when I passed by recently. A stunning stretch of water burst into view and I was compelled to pull over to watch the sun set in the company of dozens of snow-white swans. 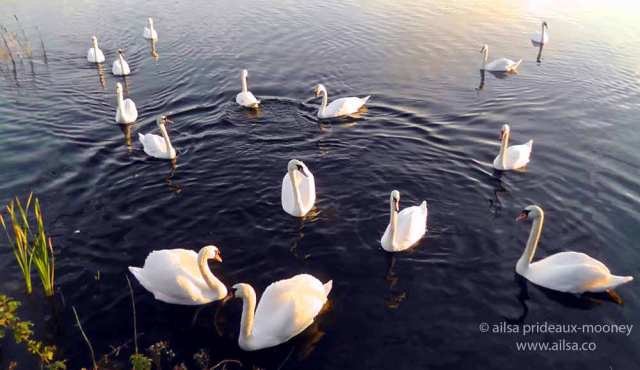 Sitting by the side of the road enjoying the slow dance of those graceful creatures, while behind me, unseen, the hum of rush hour traffic started to build, I was reminded of a poem by Mary Oliver.

Did you too see it, drifting, all night, on the black river?
Did you see it in the morning, rising into the silvery air –
An armful of white blossoms,
A perfect commotion of silk and linen as it leaned
into the bondage of its wings; a snowbank, a bank of lilies,
Biting the air with its black beak?
Did you hear it, fluting and whistling
A shrill dark music – like the rain pelting the trees – like a waterfall
Knifing down the black ledges?
And did you see it, finally, just under the clouds –
A white cross Streaming across the sky, its feet
Like black leaves, its wings Like the stretching light of the river?
And did you feel it, in your heart, how it pertained to everything?
And have you too finally figured out what beauty is for?
And have you changed your life?

Hi there! I’m Ailsa Prideaux-Mooney. I’ve lived in many places, and travelled to many more. I had a lot of fun getting there and being there, wherever there happened to be at the time. I climbed a castle wall in Czesky Krumlov, abseiled down cliffs to go caving in the west of Ireland, slept on the beach in Paros, got chased by a swarm of bees in Vourvourou (ok that wasn’t fun, but it was exciting), learned flower arranging in Tokyo, found myself in the middle of a riot in Seoul, learned to snowboard in Salzburg, got lost in a labyrinth in Budapest and had my ice cream stolen by a gull in Cornwall. And I’m just getting started. If you’ve enjoyed what you’ve read so far, I’d love you to follow my travelogue - wheresmybackpack.com - and remember, anyone who tries to tell you it’s a small world hasn’t tried to see it all.
View all posts by ailsapm →
This entry was posted in Europe, Ireland, Photography, Travel and tagged inspiration, nature, photography, photos, pictures, poetry, travel, writing. Bookmark the permalink.