Just outside of Amarillo’s city limits, west along the grand old Mother Road, lies one of those roadside attractions you just don’t want to miss. Cadillac Ranch is an art installation that was created in 1974 by a San Fransiscan artists’ collective called The Ant Farm. Despite its relative ‘newness’ compared to other Route 66 attractions that date back much closer to the road’s inception in 1926, this quirky slice of Americana perfectly encapsulates the spirit of freedom that this legendary road has come to represent.

Keep your eyes peeled as you leave town, because you can’t access the ranch from the current highway; you have to turn off onto the southern Frontage Road that runs parallel to the highway, headed eastbound. A delicious graffiti-covered turnstile cobbled together out of bits of pipe guards the entrance.

When I visited, even the local dumpster glowed pink, purple, green and yellow with a brand new coat of spray paint.

Clambering over the turnstile and traipsing along a dusty path through the pancake-flat Texas Panhandle, I encountered a steady stream of road trippers on their way back out; a vaguely anarchic gleam of satisfaction twinkling in their eyes as we passed and swapped glances. 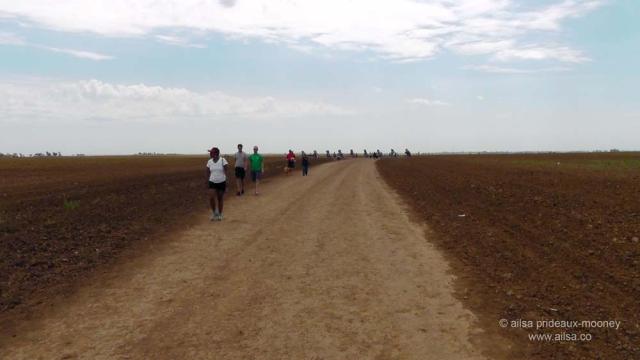 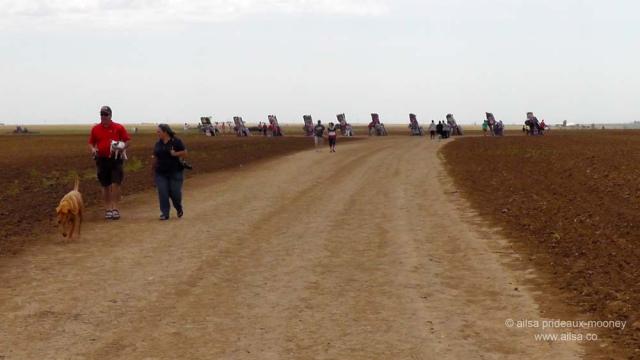 At the end of the dusty trail, ten grand old Cadillacs, once symbols of the American dream, were planted nose first in the ground; all in a row, all at the same depth and angle (purported to be the same angle as the sides of the Pyramids at Giza).

The cars were picked up second hand and installed with their original paintwork intact. It didn’t take long for visitors to start leaving their own marks on the installation – and this was encouraged by the artists and the local eccentric millionaire Stanley Marsh 3, who paid to commission Cadillac Ranch. Before long, the cars were stripped down to the shells they are today and ever-changing layers of graffiti adorned every surface. 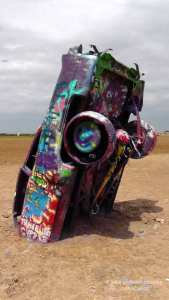 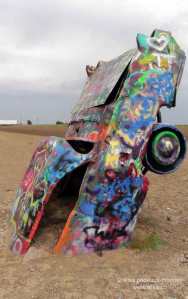 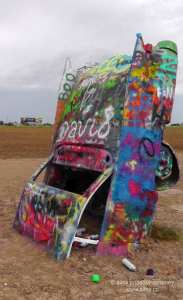 I loved everything about the Cadillacs. I’ve seen photos of the original installation and while the cars looked wonderful back then, there’s something about the way they look today that evokes the incomparable joy and freedom of the open road. The cars never look the same from one day to the next which parallels the ever-changing nature of a road trip. Allowing visitors to leave their own mark, giving them the freedom to express themselves, that is the decadent essence of the all-American road trip. Blazing your own trail, escaping the confines of the homogeneous. The rules are, there are no rules. 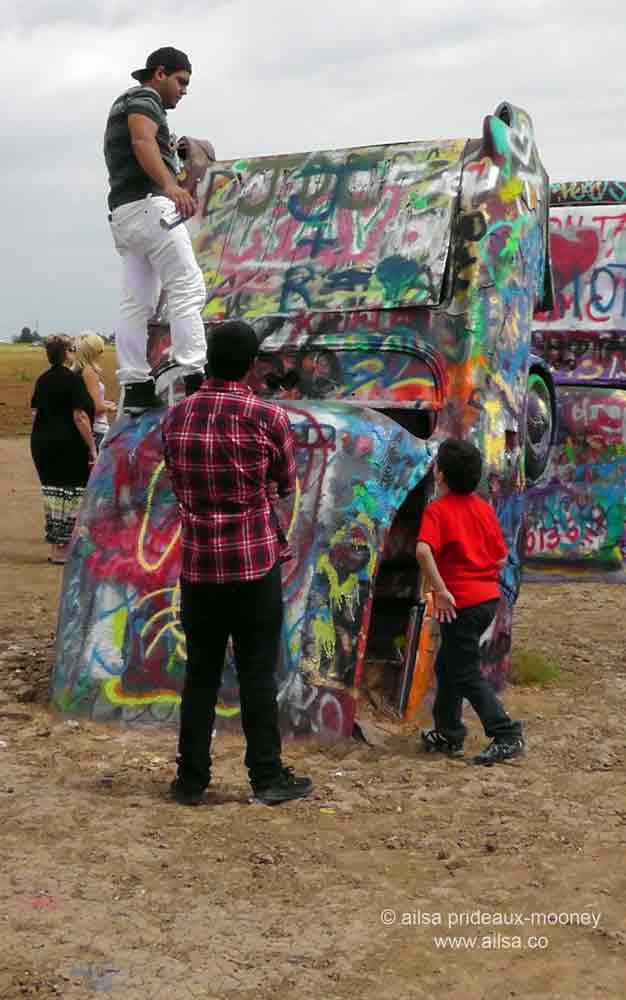 The fact that the Caddies are half-buried face down in the dirt might put a damper on it for some, but for me, it’s all about the tail fins and they are still reaching for the sky.

The American Dream may seem half-buried in these complicated times but in the middle of a dusty field out in the Texas Panhandle, hope springs eternal.

So throw off your shackles, get your motors running and plan your next road trip.

Hi there! I’m Ailsa Prideaux-Mooney. I’ve lived in many places, and travelled to many more. I had a lot of fun getting there and being there, wherever there happened to be at the time. I climbed a castle wall in Czesky Krumlov, abseiled down cliffs to go caving in the west of Ireland, slept on the beach in Paros, got chased by a swarm of bees in Vourvourou (ok that wasn’t fun, but it was exciting), learned flower arranging in Tokyo, found myself in the middle of a riot in Seoul, learned to snowboard in Salzburg, got lost in a labyrinth in Budapest and had my ice cream stolen by a gull in Cornwall. And I’m just getting started. If you’ve enjoyed what you’ve read so far, I’d love you to follow my travelogue - wheresmybackpack.com - and remember, anyone who tries to tell you it’s a small world hasn’t tried to see it all.
View all posts by ailsapm →
This entry was posted in Photography, Texas, Travel, United States and tagged art, inspiration, photography, photos, pictures, road trip, travel, writing. Bookmark the permalink.