How the Devil lost his thumb

Germany’s pretty little spa town of Bad Aachen is towered over by its stunning cathedral, referred to locally as the Dom.

It is the oldest cathedral in northern Europe; ground was first broken for this spectacular building in 796 AD and it was consecrated in the year 805 AD so it has seen its fair share of history. I walked by the Dom every day for a year on my way to classes at Aachen University, and ventured inside on numerous occasions to stare in wonder at the interior of sparkling mosaic and stained glass.

On my third or fourth foray inside the cathedral, I was struck by a couple of rather unusual statues gracing the entryway; one of an over-sized pine cone; the other, facing it, a rather tortured looking wolf with a hole in its chest. 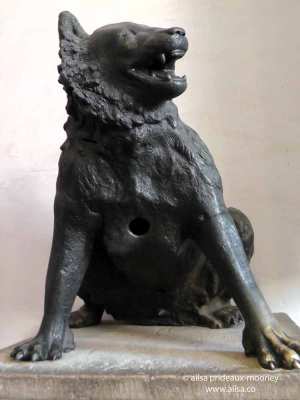 An elderly lady noticed me staring at the wolf and asked if I knew the legend behind the statues. When I professed ignorance, she proceed to tell me the story of how the devil lost his thumb.

Way back when the cathedral was being constructed, Aachen’s city coffers ran dry and the townsfolk were looking around for a quick injection of cash. The devil saw an opportunity and offered them the cash they needed to complete the cathedral. In return, he demanded the soul of the first living being that entered the cathedral upon its completion. The Aachen townspeople huddled together and came up with a plan to outwit Old Nick. They agreed to the deal, took the cash and finished construction. Then they went to the surrounding forest and captured a wolf, released him in front of the cathedral and chased him through the front door. The devil, so excited his deal was paying off, grabbed the wolf’s soul before he realized he had been tricked. Noticing he’d been had, the poor old devil flew into a rage and stormed out of the cathedral, slamming the doors behind him with such force he tore off one of his thumbs. So Aachen got its cathedral and the wolf lost his soul, but is forever memorialized by that statue in the entryway, with the pine cone representing his stolen soul. Poor old wolf.

Don’t believe me? Well, next time you’re in Aachen, pay a visit to the Dom. Stand in front of the doors at the entrance …

… and if you’re very brave, have a feel around inside the mouths of the two lions on the doors. You might just discover the devil’s severed thumb still lurking within.

The devil, as they say, is in the details.

16 Responses to How the Devil lost his thumb