At the foot of Rome‘s Aventine Hill, not far for the Tiber River, lies a medieval church by the name of Chiesa di Santa Maria in Cosmedin. It was built in the 8th century but revamped in the 12th century when a beautifully ornate seven-storey bell tower and portico were added.

The portico is home to a most unusual and extremely popular sculpture – La Bocca della Verità, otherwise known as the Mouth of Truth, which came to worldwide attention in the classic movie Roman Holiday starring Audrey Hepburn and Gregory Peck. The term ‘Bocca della Verità’ was originally a term applied to public letter boxes in the Middle Ages, where people could anonymously drop letters accusing fellow citizens of sinful behaviour, but it has since evolved to refer to this sculpture in particular.

The Mouth of Truth is a huge marble mask which, according to historians, started out as something functional, although nobody is entirely sure what that function might have been. Suggestions include manhole or well cover, part of a fountain, a surface where sacrificial animals were drained of their blood or a water collector in a temple that had an oculus; an opening in the roof that would let in the rain. At some point over the years, however, the mask found a new purpose – that of an ancient lie detector. Locals believed that if you put your hand in the mouth and told a lie, the mouth would close and bite your hand off. In earlier times, those suspected of perjury or adultery were dragged kicking and screaming to the mask and asked to admit their wrong-doings with their hand in the mouth. 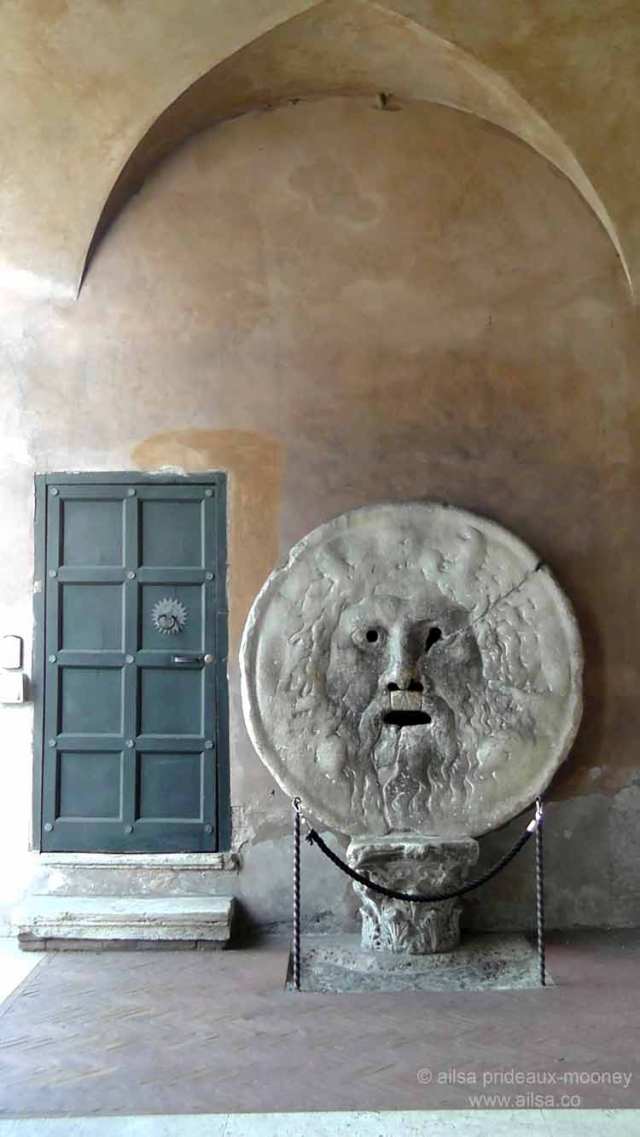 Legend has it that the Bocca della Verità was outwitted by a savvy Roman lady whose husband suspected her of adultery. He was quite correct; she was indeed having an affair, and when she was brought to the mask, her lover rushed from the crowd and kissed her, declaring his undying love. She denounced him as a madman, saying she’d never seen him before and sent him packing. Without skipping a beat, she stuck her hand in the mouth and declared proudly and truthfully that she had never been kissed by any man other than her husband… and the madman who had just kissed her. The Bocca della Verità lost all credibility and hasn’t bitten off another hand since.

Nowadays, no coercion is required; people line up eagerly to place their hand in the mouth and pose for a photo. I don’t know how many of them willingly risk their hand by telling a lie, however, because that glowering face with its fierce eyes, flowing mane and gaping mouth is still pretty unnerving close up.

Hi there! I’m Ailsa Prideaux-Mooney. I’ve lived in many places, and travelled to many more. I had a lot of fun getting there and being there, wherever there happened to be at the time. I climbed a castle wall in Czesky Krumlov, abseiled down cliffs to go caving in the west of Ireland, slept on the beach in Paros, got chased by a swarm of bees in Vourvourou (ok that wasn’t fun, but it was exciting), learned flower arranging in Tokyo, found myself in the middle of a riot in Seoul, learned to snowboard in Salzburg, got lost in a labyrinth in Budapest and had my ice cream stolen by a gull in Cornwall. And I’m just getting started. If you’ve enjoyed what you’ve read so far, I’d love you to follow my travelogue - wheresmybackpack.com - and remember, anyone who tries to tell you it’s a small world hasn’t tried to see it all.
View all posts by ailsapm →
This entry was posted in Europe, Italy, Photography, Travel and tagged architecture, art, history, inspiration, photography, photos, travel, writing. Bookmark the permalink.