A Tomb with a View

The first time I laid eyes on Castel Sant’Angelo, looming large over the banks of the Tiber, a chill ran down my spine. 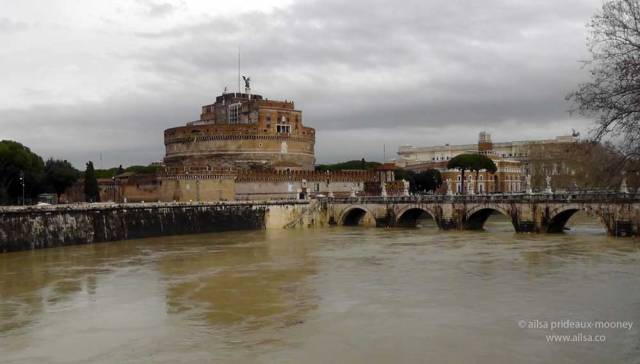 Having spent days wandering through Rome in a romantic haze of columns and fountains and orange gardens, the unabashed militaristic presence of the castle took me aback. The approach was softened somewhat by the glorious Ponte Sant’Angelo, lined with dazzling white marble angels… 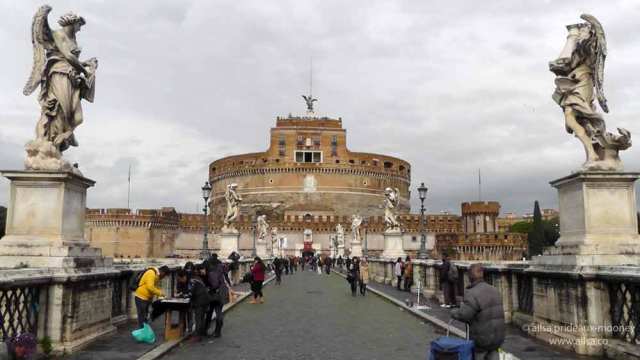 … but once the angels were behind me the castle scowled down once more, redolent of murder and intrigue. It started life as a mausoleum commissioned by the emperor Hadrian and completed by his adoptive son a year after Hadrian’s death. For years it housed the ashes of Hadrian and many other notables including Septimius Severus, Marcus Aurelius and his son Commodus, but in 410 AD, Alaric and his merry Visigoths hit town and left a trail of destruction in their wake, ransacking the city and castle, scattering the ashes to the four winds.

It lost its function as a tomb and became a fortress, gaining its present name in 590 AD when Pope Gregory saw a vision of the Archangel Michael atop the mausoleum. Rome was plague-stricken at the time, so the canny Pope struck a deal with the apparition; he would build a memorial to the Archangel if he could make the plague go away. The plague duly went away and Gregory kept his promise which is why the present structure is adorned with a statue of the Archangel. The angel on the roof is a ‘new and improved’ angel installed in 1753; the original marble angel now lives in the Courtyard of the Cannonballs.

Now the Popes took over the castle, using it as a residential castle and a place to guard their treasures and ever-increasing wealth. Pope Nicholas III ordered the building of an elevated, fortified passageway connecting the castle to Vatican City. Known as the Passetto di Borgo, it facilitated the escape of several popes in peril. The infamous Pope Alexander VI (he of the many mistresses and offspring including Cesare and Lucrezia Borgia) hot-footed it down the Passetto di Borgo in 1494 and hunkered down in the castle when Charles VIII invaded the city. Later still, Pope Clement VII hoisted his cassock and legged it along the passageway during the Sack of Rome in 1527. While the Pope camped out in the safety of the castle, the Swiss Guard were massacred.

But the bloodshed didn’t end there.  While the papacy stashed riches and entertained mistresses upstairs, the lower levels were used to incarcerate, torture and execute political prisoners. Philosopher Giordano Bruno was held here and interrogated by the Roman inquisition for championing the heliocentrism that Copernicus had made so popular. He also suggested that the sun was just one of many stars in the sky; postulating that there could be many worlds such as ours circling many stars out there in the universe.  Unlike his contemporary Galileo Galilei, Bruno refused to recant and was burned at the stake. More often than not, however, the bodies of executed prisoners were displayed on the bridge as a warning to would-be miscreants. No wonder the place gave me the shivers.

Puccini set his opera Tosca here during the time it was an active prison. The eponymous heroine, upon discovering her love had been executed, threw herself off the roof of the castle and plummeted to her death. Nowadays there’s a cafe on the rooftop terrace, so you can sip a cappuccino and take in the awe-inspiring view Tosca would have enjoyed on her way down.

Hi there! I’m Ailsa Prideaux-Mooney. I’ve lived in many places, and travelled to many more. I had a lot of fun getting there and being there, wherever there happened to be at the time. I climbed a castle wall in Czesky Krumlov, abseiled down cliffs to go caving in the west of Ireland, slept on the beach in Paros, got chased by a swarm of bees in Vourvourou (ok that wasn’t fun, but it was exciting), learned flower arranging in Tokyo, found myself in the middle of a riot in Seoul, learned to snowboard in Salzburg, got lost in a labyrinth in Budapest and had my ice cream stolen by a gull in Cornwall. And I’m just getting started. If you’ve enjoyed what you’ve read so far, I’d love you to follow my travelogue - wheresmybackpack.com - and remember, anyone who tries to tell you it’s a small world hasn’t tried to see it all.
View all posts by ailsapm →
This entry was posted in Europe, Italy, Photography, Travel and tagged history, humor, photography, photos, pictures, travel, writing. Bookmark the permalink.

35 Responses to A Tomb with a View