12 free things to do in Seattle’s Pike Place Market

No trip to Seattle would be complete without a visit to Pike Place Market, with its bustling stalls, cobbled streets and neon signs.

Filled to overflowing with the freshest of produce and flowers, hand-crafted jewellery, artisan breads, jams, honey and cheese;  it is an easy place to get carried away on a shopping spree, but you don’t have to spend a fortune to enjoy the market. Here are a few suggestions that won’t strain your purse strings.

1. Watch cheese being made.

Beecher’s have been delighting Seattle’s taste buds since 2003 when they first opened their flagship store in Pike Place Market.

As you walk by the shop on the corner of Pike Place and Pine Street, you can push your nose up against the windows and watch the cheese makers at work in their glass-walled kitchen. 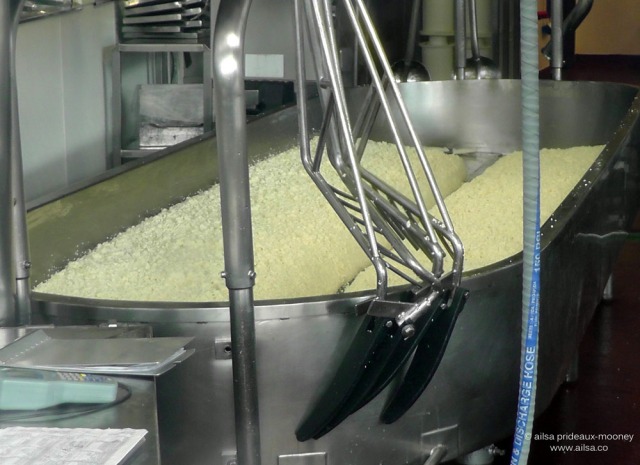 The end result is some of the freshest cheese you’ve ever tasted. 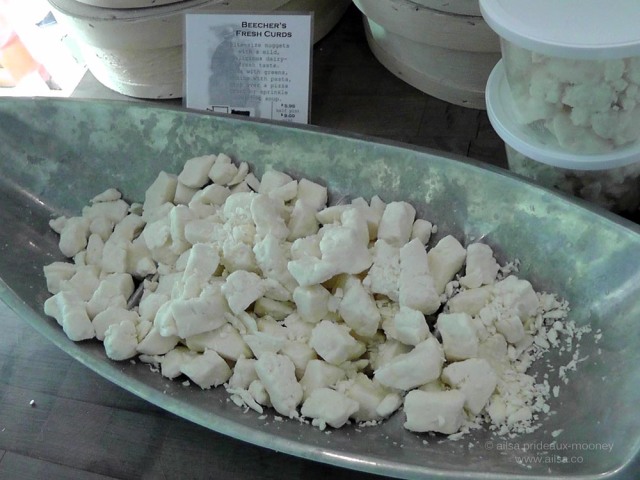 There’s always something going on down at the market, from clowns and living statues to incredible a capella gospel singers and Artis the Spoonman and Jim Page rocking the crowd into a frenzy.

Left Bank Books began as a small kiosk in the market in 1973, moving shortly thereafter to its current shop front on First and Pine where it has served as bookstore to Seattle’s radical community ever since. Inside the store, jam-packed shelves creak under the weight of left-leaning tomes. For such a small space it packs in a wealth of titles; many from indie publishers and covering every subject imaginable. It is easy to spend a couple of hours looking through the neatly organized shelves of this gem of a bookstore and when you finally emerge back into daylight, don’t be surprised if you’ve developed a rebellious swagger to your gait.

Pike Place Market is renowned for its pigs; they’re everywhere. Big ones, small ones, in shop windows, on the sidewalk, perched on rooftops. The most famous pig, Rachel, stands guard proudly underneath the main sign for the market, but there are many more to be found if you take the time to look around.

The market floor is covered with approximately 55,000 ‘name’ tiles. They were sold as part of a fundraising campaign and anyone who bought one could choose an inscription for their tile when they were installed in 1985. Mixed in with the names of market supporters and local Seattleites you can find all kinds of celebrities and even a couple of presidents. There are plenty of interesting inscriptions to keep you entertained. Here are a few of my favourites. 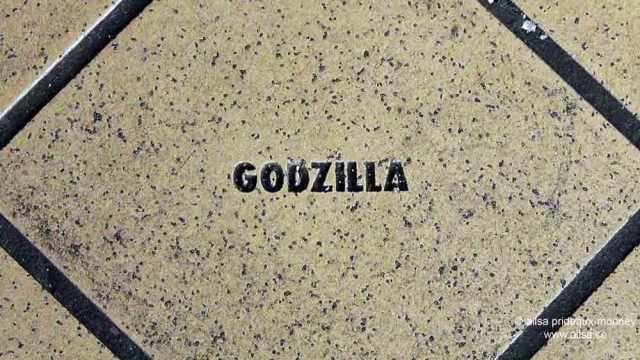 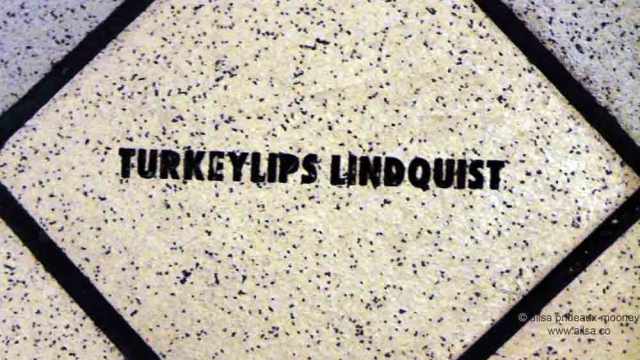 Don’t wait too long to check out the tiles. Several are cracked or broken, having weathered market crowds for almost 30 years, so they’re slowly being replaced. Catch them while you can.

While you’re looking at the floor, check out the bronze pig hooves on the ground near the main entrance; also part of the fundraising campaign. You might spot a few familiar names. 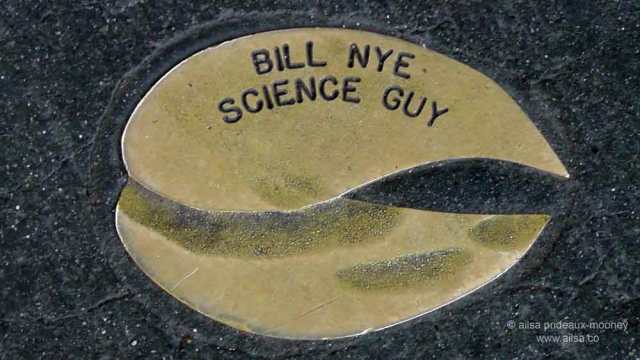 7. Watch out for low-flying fish.

This is perhaps the most popular of tourist activities at the market, but even so, it’s well worth a quick stop. Fishmongers hurling huge fish to each other is guaranteed to get the crowd going, especially when they miss.

If you’re very brave, you can get in on the action for yourself.

8. Take a photo of the “original” Starbucks.

The “original” is in quotation marks because in the days before Howard Schulz and long before the Venti Frappuccino, the original Starbucks was located at 2000 Western Avenue at the intersection with Virginia Street. They didn’t relocate to their present spot in the market until 1977 when their old building was torn down.

At least the logo is the original one. The brazen mermaid was deemed a little too titillating for general consumption in the 1970s so she was replaced with a more demure version.

The vendors at the market believe in try before you buy, so there’s no end to delicious samples on offer, from unique jams…

…to chocolate pasta – seriously, you have to taste it!

… or tulips, depending upon the season. Pike Place Market is the best place in the city to find freshly cut blooms at a bargain price, and the sight of those bouquets stretching the length of the market halls is enough to gladden the heart. 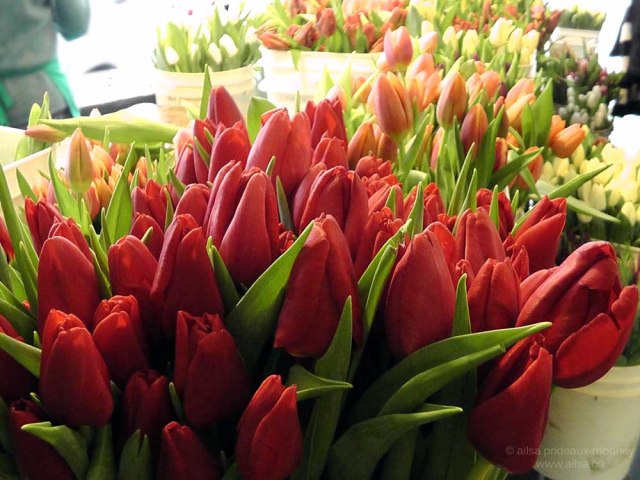 This is a sight so grisly it deserved its very own post, so I wrote about it here. 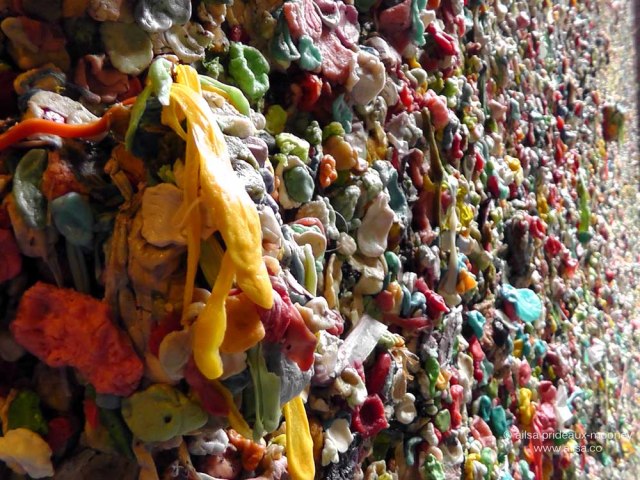 12. Get a mystical energy boost.

Wander down the steps to Western Avenue to get a view of the Market from another angle. While you’re down there, look for an alcove underneath the bridge where a staircase leads you back into the market. At the bottom of the steps lies an unusual sculpture named ‘A Point’.

The work of late Seattle artist Michael Oren; it honours the Native American peoples who lived here long before settlers set foot in the Pacific Northwest. It is placed on a spot sacred to the Duwamish, Suquamish and Nisqually tribes in the area and held to be a ‘thin place’ where this world and other realms collide. The three sides to the sculpture may well signify the three tribes; there is also a suggestion that the three sides correspond to the direction of three significant ley lines that run through Seattle and intersect right at the tip of the sculpture. The artist incorporated crystals at the base of the sculpture for people to run their hands over, in the hopes of increasing their chances of feeling the energy being emitted. Hold your hand over the top of the sculpture and see if you get a jolt of otherworldly energy. Then go back up the steps to the market and explore some more!

Hi there! I’m Ailsa Prideaux-Mooney. I’ve lived in many places, and travelled to many more. I had a lot of fun getting there and being there, wherever there happened to be at the time. I climbed a castle wall in Czesky Krumlov, abseiled down cliffs to go caving in the west of Ireland, slept on the beach in Paros, got chased by a swarm of bees in Vourvourou (ok that wasn’t fun, but it was exciting), learned flower arranging in Tokyo, found myself in the middle of a riot in Seoul, learned to snowboard in Salzburg, got lost in a labyrinth in Budapest and had my ice cream stolen by a gull in Cornwall. And I’m just getting started. If you’ve enjoyed what you’ve read so far, I’d love you to follow my travelogue - wheresmybackpack.com - and remember, anyone who tries to tell you it’s a small world hasn’t tried to see it all.
View all posts by ailsapm →
This entry was posted in Photography, Travel, Travel tips, United States, Washington and tagged photography, photos, pictures, travel, travel tips, writing. Bookmark the permalink.