It is the middle of the night as I write this and a thick fog has descended outside, muffling sounds, dimming streetlights to a whisper and smudging the surrounding countryside into dark, indecipherable daubs of smoke. This is my favourite kind of weather, utterly romantic and thrillingly mysterious. Fog-drenched cities transport me to Dickensian London, full of cobblestones and horse-drawn carriages, villains, jovial ne’er-do-wells and the occasional cheeky urchin. In the countryside, the very minute a veil of mist obscures the view, I fancy I hear Cathy’s ghost calling out across the moors for her beloved Heathcliff. Inspired by the great swirling blanket outside my window, I have gone looking for some of my haziest photos.

Arches National Park on a misty day has got to be seen to be believed. Spectacular at any time of year, but during monsoon season it takes on an entirely mystical allure. 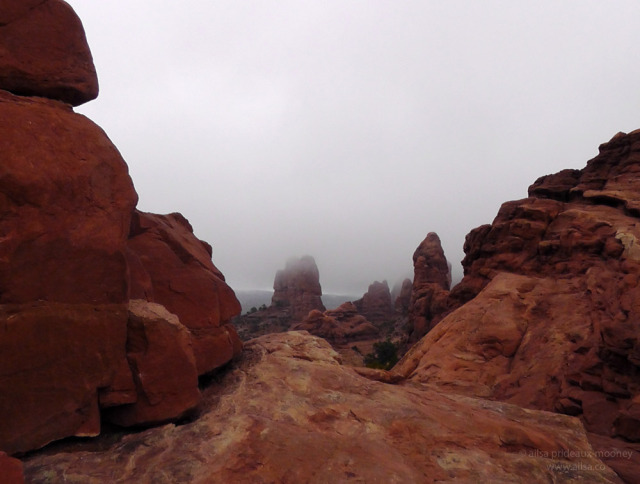 Manhattan in the fog looks like an ocean liner gliding gently down the Hudson River. Even the yellow cabs seem to honk in hushed tones. 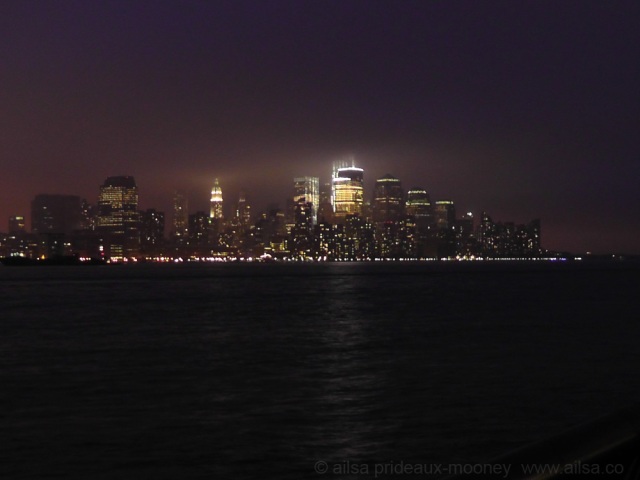 I spotted this baby fawn trying to keep up with its mother on a cloud-covered trek in Mount Rainier National Park. 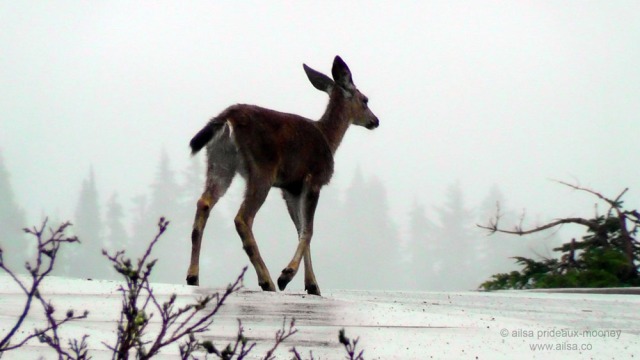 A horse and his rider, enveloped in the fog that greeted us as we reached the top of Volcán de Pacaya in Guatemala. We didn’t toast marshmallows on the hot lava, but I did get to ash-ski back down the volcano by twilight, which was a ridiculous amount of fun. 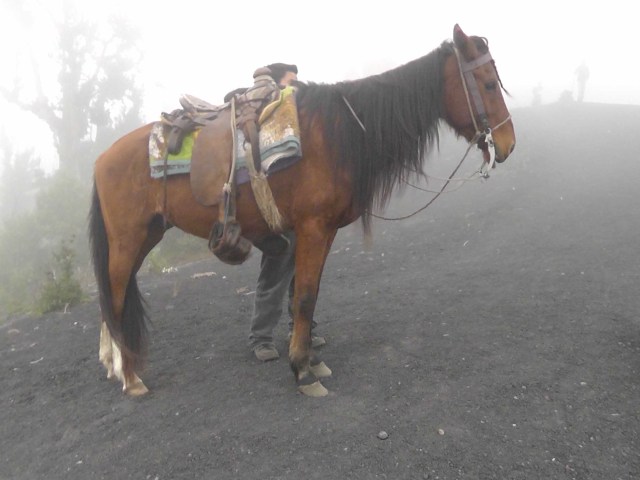 I hope this week’s travel theme doesn’t get you lost in the mists of time. If you would like to join in (everyone’s welcome!) here’s what to do:

Play Misty for me.

Walk on a rainbow trail; walk on a trail of song, and all about you will be beauty. There is a way out of every dark mist, over a rainbow trail. – Robert Motherwell

…and one of my favourite poems, it never fails to make me laugh…

In the Arms of My Glasses

They can call me softy
as ofty
as they please
but still I’ll stand by these
my little optical accessories
they stop me walking into lampposts
and trees, when it’s foggy
and I’m out walking with my doggie

Hi there! I’m Ailsa Prideaux-Mooney. I’ve lived in many places, and travelled to many more. I had a lot of fun getting there and being there, wherever there happened to be at the time. I climbed a castle wall in Czesky Krumlov, abseiled down cliffs to go caving in the west of Ireland, slept on the beach in Paros, got chased by a swarm of bees in Vourvourou (ok that wasn’t fun, but it was exciting), learned flower arranging in Tokyo, found myself in the middle of a riot in Seoul, learned to snowboard in Salzburg, got lost in a labyrinth in Budapest and had my ice cream stolen by a gull in Cornwall. And I’m just getting started. If you’ve enjoyed what you’ve read so far, I’d love you to follow my travelogue - wheresmybackpack.com - and remember, anyone who tries to tell you it’s a small world hasn’t tried to see it all.
View all posts by ailsapm →
This entry was posted in Photography, Travel, Weekly Travel Themes and tagged humor, inspiration, photography, photos, pictures, poetry, travel, weekly photo challenge, writing. Bookmark the permalink.