April 23rd 2014 marks the thousandth anniversary of the death of a legendary High King of Ireland. Every Irish person, child and adult alike, is familiar with the name of Brian Ború; his stance against the Vikings and his death at the Battle of Clontarf feature in all school history books, pubs and restaurants bear his name and paintings abound of a larger-than-life bearded warrior with flowing hair brandishing a sword. But apart from a vague idea of a warrior king who died defeating the Vikings, for most people, he has always been a little blurry around the edges. Even dedicated scholars of history disagree about Ború’s politics, achievements and heroic status. One thing is certain, however. Of all the High Kings of Ireland, his is the only name instantly recognizable to all. For some reason, the spirit of Brian Ború; the man, the king, the warrior and the legend, refuses to retreat quietly into the past. Last weekend I made a trip to visit his birthplace; a quaint little village that gave rise to Ireland’s most famous king. Killaloe, County Clare and its twin town, Ballina, County Tipperary, straddle the banks of the River Shannon, at the southern end of Lough Derg; the largest of the Shannon’s lakes.

It was in Killaloe that Brian was born, 12th son of a local tribal chief, Cennétig (Kennedy), around 941 AD. While Gaelic Celts had been enjoying an entirely homogenous existence in Ireland since approximately 500 BC, they had been weathering a spate of Viking invasions in the years leading up to Brian’s birth. Vikings had built strongholds in the coastal areas of Cork, Waterford, Limerick, Wexford and most strategically, Dublin. Elsewhere in the country, the Celts were a disparate lot; the country was divided into 5 regions corresponding to today’s provinces – Ulster, Leinster, Connacht/Connaught and Munster (with Meath making up the 5th region). All over Ireland, tribes were busy battling Vikings and vying for power amongst each other. It was one big mess. Brian’s tribe was pretty low down in the pecking order; they were a branch of the Dál gCais who were themselves a branch of a branch of a tribe who were vassals paying homage to the King of Munster. As the twelfth son of a family so far removed from nobility, Brian looked set to disappear into the annals of history without leaving a trace behind.  The drive across the country was delightful, despite Google Maps’ inability to keep up with the Irish predilection for building roundabouts. At some point you just toss the directions and go with your gut feeling that the winding dirt lane blocked by sheep is not, in fact, a major arterial. Killaloe was buzzing when I drove across the little bridge over the Shannon. A Viking village had been set up along the banks of the river, populated by living history re-enactors giving longboat rides and archery lessons. 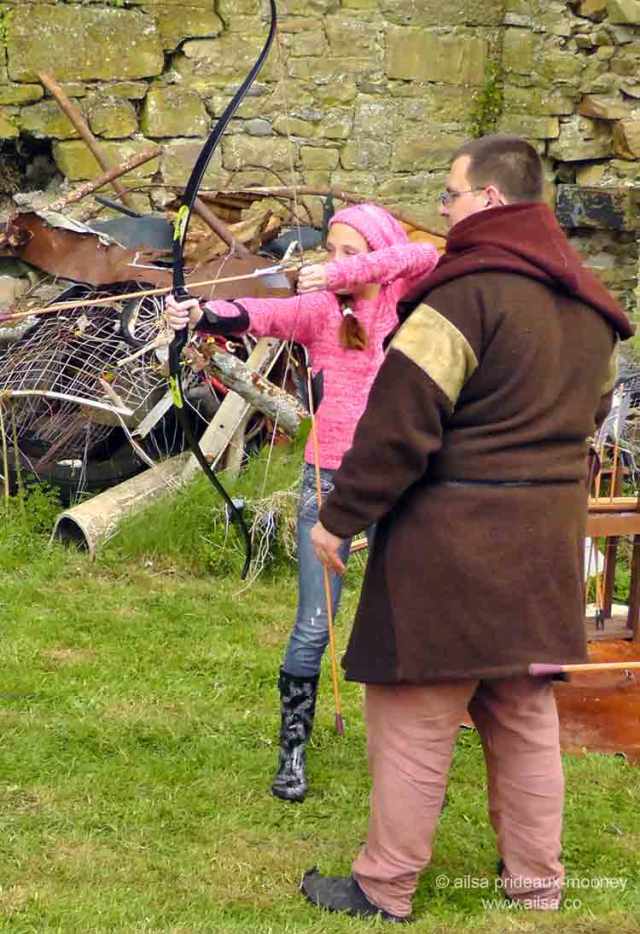 In ‘Viking’ tents there were talks and demonstrations of ancient metal working, cookery, herbal medicines and textiles. 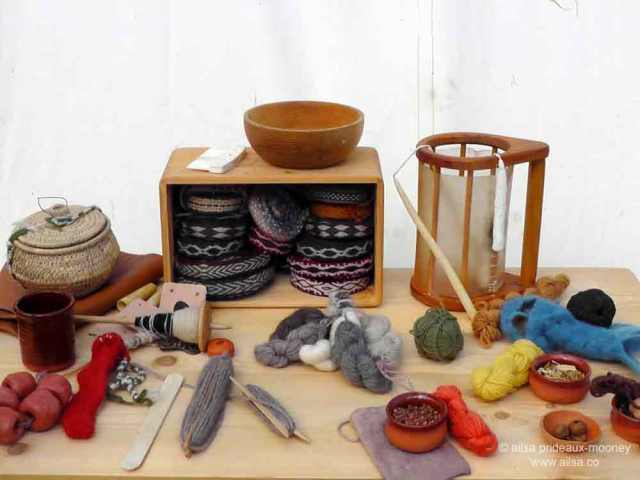 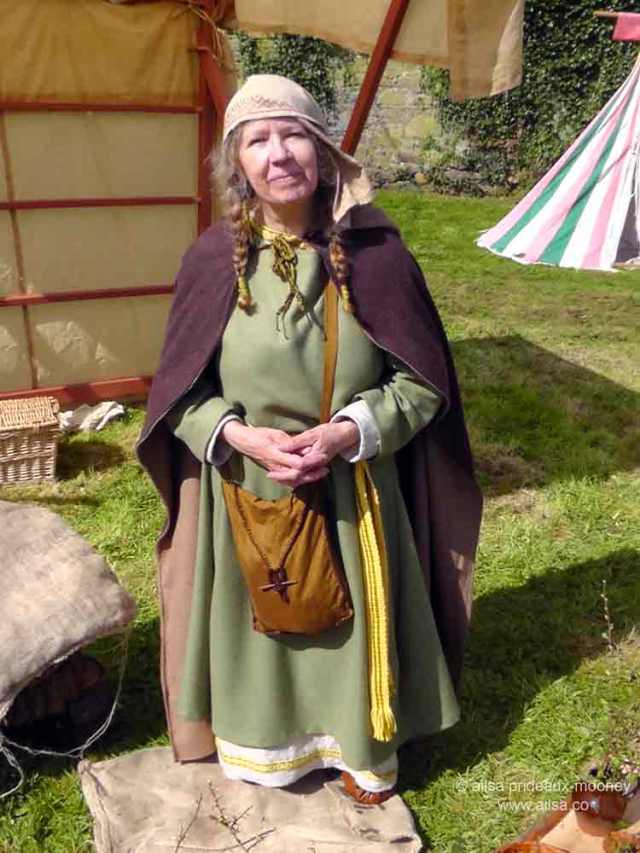 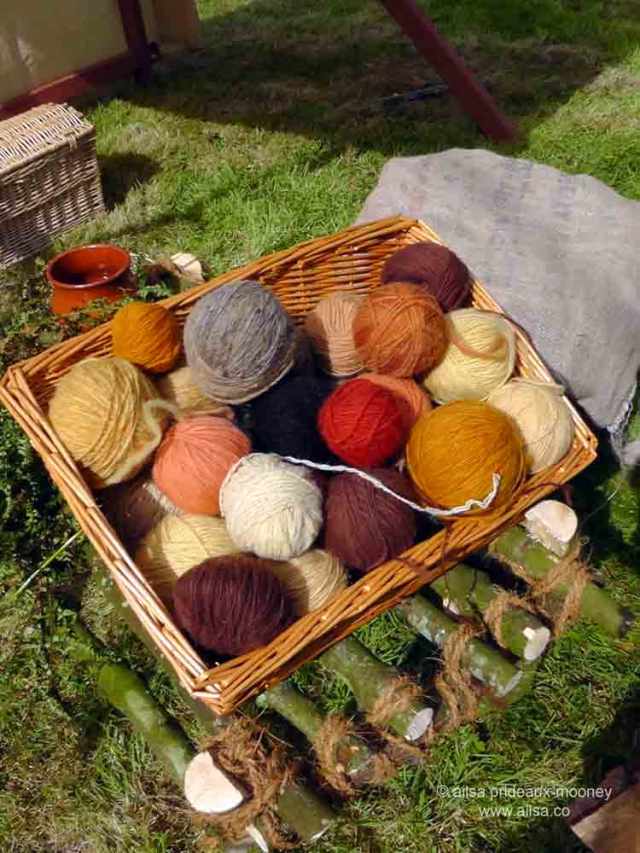 One chap was rushing around excitedly showing off his latest weaponry; he’d had them fashioned after artifacts on display in the National Museum of Ireland. They looked like they could inflict a serious amount of damage.

A group of armour-clad Vikings led the crowds over the bridge to the Ballina side where they demonstrated battle skills and training games, including Bran Dubh and Ragnarok which looked suspiciously like that scene from the Hunger Games where everyone runs into the middle to grab a weapon and then the killing begins. 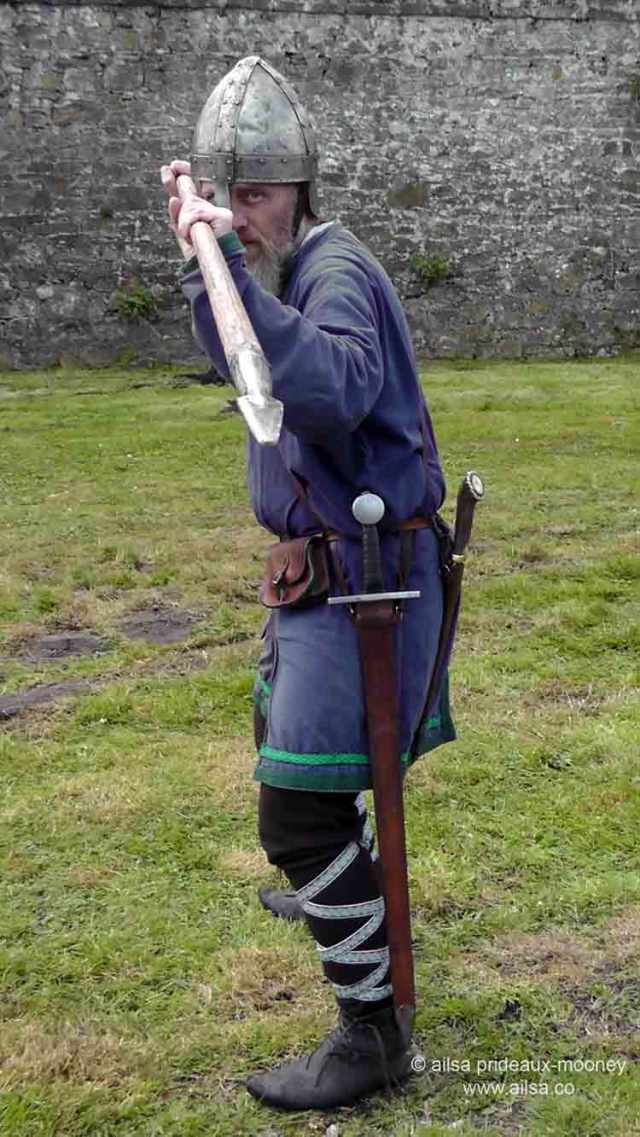 I left the games to wander back to Killaloe in search of Brian’s palace of yore. When he ascended to High King of Ireland, Brian flew in the face of tradition. Instead of ruling the country from somewhere traditional like the Rock of Cashel, aka Cashel of the Kings, he elected to rule from his old stomping ground. It was the ancient equivalent of Princess Kate Middleton shopping at Topshop – Brian was keeping it real. Steep, narrow streets scale the hill that rises abruptly up from the river bank. The royal residence that once graced its summit took its name from the hill, Kincora, an anglicized version of the Irish ‘Ceann Coradh’ which translates as Head of the Weir. These days, while the hill still offers a great vantage point over the village, there is no trace of the palace. After Brian’s death, Kincora was destroyed and rebuilt numerous times, then struck by lightning and finally demolished by a vengeful King of Connacht, who went to great lengths to eradicate every last piece of it by throwing the remaining stones and timber into the river. In its place stands an austerely constructed Catholic church. 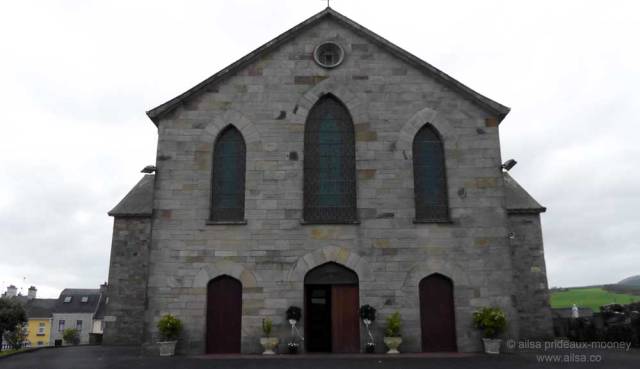 It was worth the visit, though. In the grounds of the church is a beautiful nave and chancel church, St Lua’s oratory, dating back to the 10th or 11th century. It was moved stone by stone from Friar’s Island on the Shannon River when a hydroelectric power station was built, resulting in the planned flooding and submerging of the island.

The sun came out as I wound my way back down the hill, feeling distinctly unfulfilled. Viking combat games and vanquished palaces had brought me no closer to the legend of Brian Ború. Before leaving, I decided to make a short trip north of the village, along the promisingly named Brian Ború Walk which skirts the Shannon and the western shore of Lough Derg. A little over a mile along the road, I pulled over at the sight of a policeman wearing a luminous yellow jacket and brandishing a speed radar gun. “Excuse me”, I ventured, “do you know where Brian Ború’s fort is?” He looked puzzled for a moment, then he perked up and pointed. “There’s a sign on that gate there.” I looked, and sure enough, there was a sign on a plain metal gate, easily missed if you didn’t know what you were looking for.

“What’s in there?” he asked. “I don’t know, but I’m going to find out.” I answered. “Grand, so,” he flashed a smile. “I’ll keep an eye on your car while you go for your walk.” He re-assumed his position with the speed radar as I waved goodbye and pushed my way through a tiny turnstile by the metal gate. The walkway was a dirt track lined on both sides by harsh mesh fencing. One side was evidently private property, in the early stages of being immaculately landscaped; the other side was clear cut forest; tree stumps severed in their prime, baking under the hot sun. It must have been a lovely dappled forest glade at one time. At the end of the pathway the mesh fencing melted away as the space opened out into a daisy-strewn clearing with a prepossessing earthen mound as a centrepiece.

The sides were about 12 feet high and the base was encircled by a ditch that was half as deep again. Gnarled trees leaned out at impossible angles from the steep slopes that had been carefully molded by ancient hands. The nearby village, loud with revelry, tourists and the clink of metal on metal, seemed a million miles away. I was utterly and ecstatically alone in this tiny time-warped pocket of history. Erratic clumps of violets danced and the air was still and hot and thick with birdsong as I walked, mesmerized, towards the hill fort and scrambed up the slope.

At the top a narrow path encircled the fort, affording tantalizing views of the Shannon and Lough Derg through the trees. 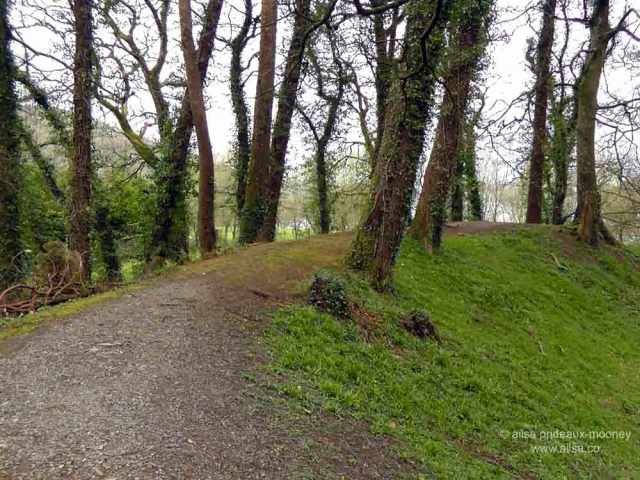 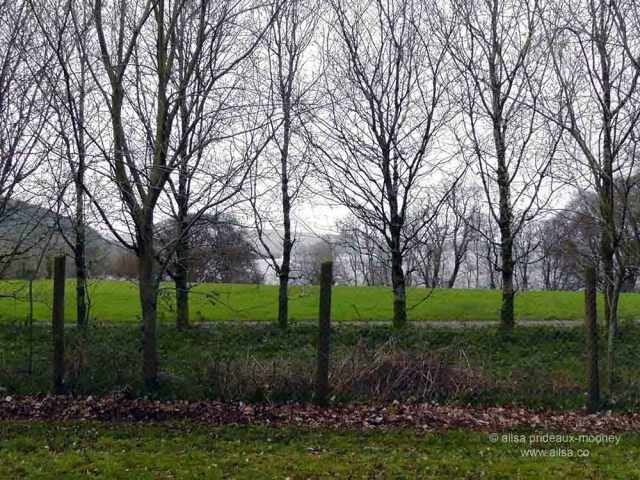 This was an important spot in Brian’s time; overlooking the best place to ford the river where Lough Derg narrows into the Shannon River. Cattle destined for tribute to the Dalcassian (Dál gCais) chiefs would be driven across the river here. The ring fort’s Irish name, Bél Bóraime, alludes to the paying of tribute in cattle, and it is probably from this location that Brian, born Brian Mac Cennétig, got the nickname that was to stay with him throughout his life – and for a thousand years more – Ború. It was also the perfect location from which to govern passage and defend against invasion along the all-important Shannon. According to tales of old, at the height of his power, Brian kept two navies – one on Lough Derg and the other on the Shannon. Inside, the sides sloped down, more gently than on the outside, to create a saucer-like enclosure with an entrance at one side. In the middle of the enclosure a fire pit and some charred wood conjured up images of early Celts gathered around a blazing fire. I wandered around the top of the fort for a bit before descending into the inner sanctum to lie down gazing up at the trees that towered overhead, soaking up the sunshine and the birdsong and breathing in the earthiness mingled with the faintest scent of violets. 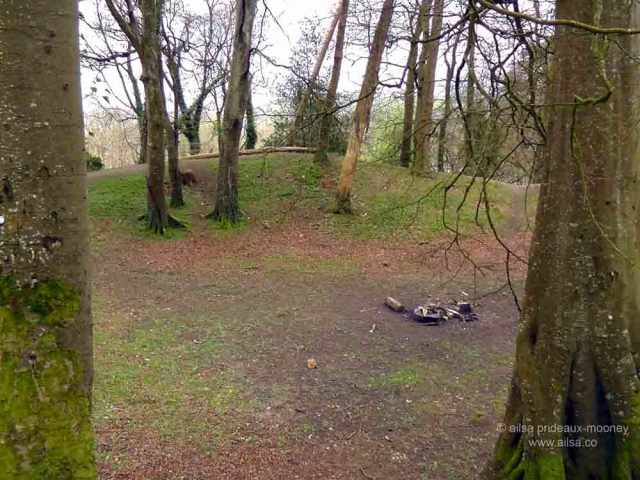 This magical, mystical spot is where Brian is believed to have been born and raised. Somewhere behind the birdsong I imagined the footsteps and laughter of a little boy who would one day grow up to be High King of all Ireland. It was with great difficulty I roused myself from my languor and walked back towards the road. The policeman greeted me with a smile. “So, how was it?” I grasped for words that fit. “Enchanting. No, enchanted. A place to let your imagination run wild.”  “Grand so, I’ll bring the kids down some weekend.” He waved as I left. I spent the journey back imagining Brian’s reluctance to leave his home when, according to legend, he was sent to study with monks on the island of Innisfallen. There he would learn Latin, the ancient traditions of Ireland and significantly, the Brehon Laws; statutes which governed everyday life in early medieval Ireland – laws that were one of the few things that all five regions of Ireland had in common. He may have been sent there to join the clergy, and he might have done so, if it had not been for murder most foul. But that is a story for another day.  For now, I leave you with some footage of my adventures in Brian Ború’s birthplace. http://youtu.be/GFnspnFwKB4 xxx Ailsa During 2014 there are events all around Ireland celebrating the life and times of Brian Ború; for more information visit brianborumillenium.ie

Hi there! I’m Ailsa Prideaux-Mooney. I’ve lived in many places, and travelled to many more. I had a lot of fun getting there and being there, wherever there happened to be at the time. I climbed a castle wall in Czesky Krumlov, abseiled down cliffs to go caving in the west of Ireland, slept on the beach in Paros, got chased by a swarm of bees in Vourvourou (ok that wasn’t fun, but it was exciting), learned flower arranging in Tokyo, found myself in the middle of a riot in Seoul, learned to snowboard in Salzburg, got lost in a labyrinth in Budapest and had my ice cream stolen by a gull in Cornwall. And I’m just getting started. If you’ve enjoyed what you’ve read so far, I’d love you to follow my travelogue - wheresmybackpack.com - and remember, anyone who tries to tell you it’s a small world hasn’t tried to see it all.
View all posts by ailsapm →
This entry was posted in Europe, Ireland, Photography, Travel and tagged brian boru, brian boru millenium, history, inspiration, photography, photos, pictures, travel, writing. Bookmark the permalink.