18th century Europe was a pretty whiffy place when Italian-born Giovanni Maria Farina moved from Italy to Germany and decided to set up shop as a perfume maker in Cologne. To cover up the stench of daily life, people were accustomed to wearing heavily-scented oils such as sandalwood, musk and cinnamon, which were often as overpowering as the odours they were trying to mask. 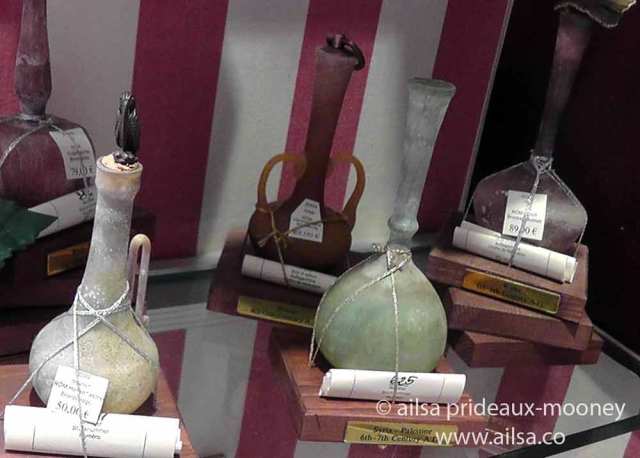 Giovanni, or Johann as the locals called him, began experimenting and eventually, as he wrote in a letter to his brother in 1708:  “… discovered a scent that reminds me of a spring morning in Italy, of wild narcissi and sweet orange blossom just after the rain.” 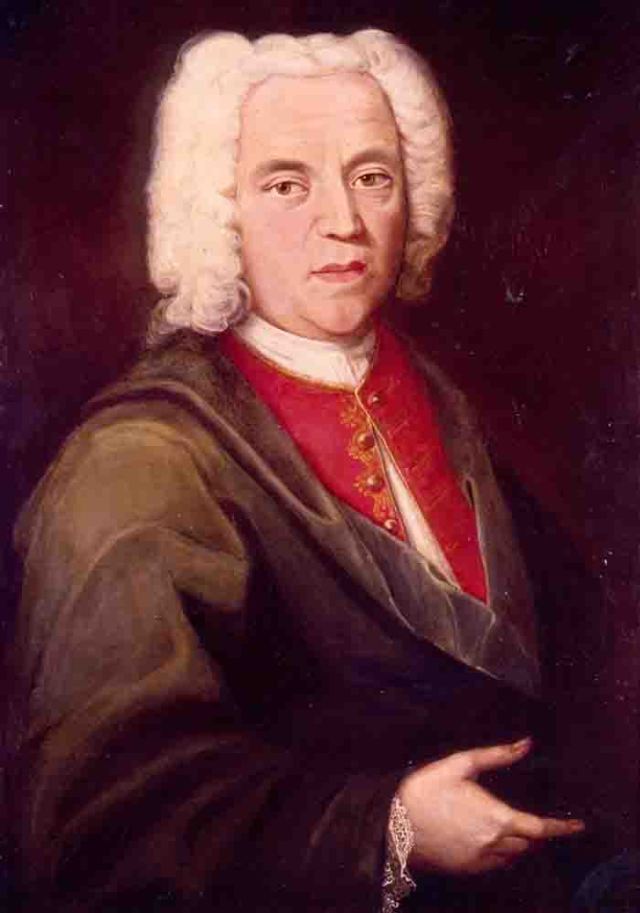 If you think the description is beautiful, wait until you try the perfume. Farina named his scent ‘Eau de Cologne’ after his adopted city. It is a delicate affair of citrus and jasmine that is still made today as it was back then. It quickly became a must-have scent for nobility (Napoleon allegedly went through a bottle a day); by the 1840s it was being shipped all over Europe, and soon it was being exported to the Americas, India, Russia and the Far East. It wasn’t just kings and queens who sought out Farina’s perfume; other notable customers included Voltaire, Mozart and Beethoven. Goethe kept a handkerchief doused with the perfume at his desk so he could waft it under his nose as he wrote. Mark Twain, Oscar Wilde and Marlene Dietrich were also fans. 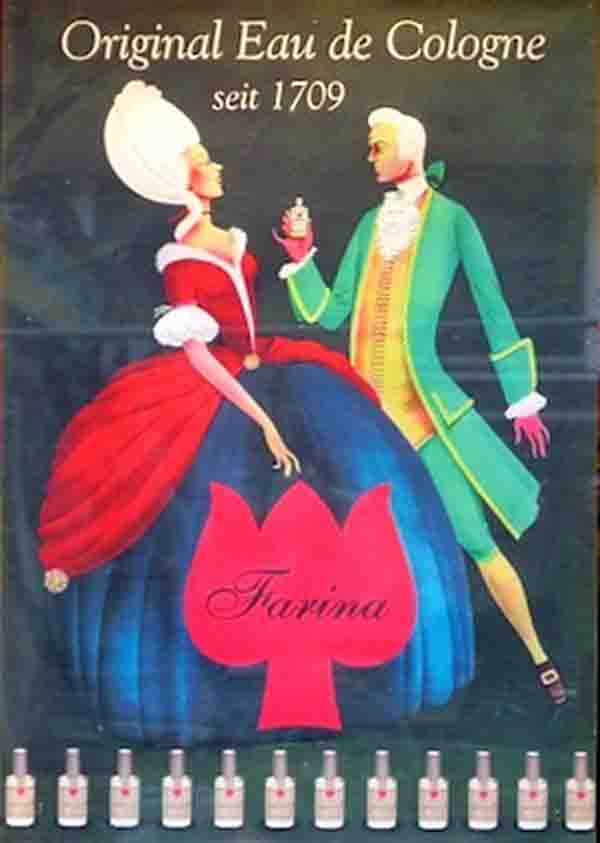 Farina was a superstar; his success earned him his own statue on Cologne’s great Cathedral. But then, as now, there were plenty of scoundrels looking to make a quick buck by capitalizing on someone else’s success, and Farina proved an easy target. The surname ‘Farina’ was a common one, so finding someone with that last name, and getting them to sign a document allowing you to trade under that name was easily done. Pretenders began to pop up all over the globe, and the Farina family employed an army of 59 detectives to unearth and close down imitators.

The most persistent of these pretenders, a chap by the name of Wilhelm Mülhens, began selling his own concoction under the Farina name from a shop in Cologne’s Glockengasse and also licensed at least twenty other people to produce his scent. Legal action shut him down, but Mülhens’ son went to Italy, found another Farina and resumed trading once again. More legal action and a generation later, Mülhens’ grandson was barred from ever again trading under the name Farina. Instead, he took the house number of his business, 4711, as the business and product name and began lauding it as the original Eau de  Cologne. Savvy marketing has made their store at 4711 Glockengasse a major tourist attraction, but now that you know better, you can find the one and only, truly original Eau de Cologne at the Farina Haus, just a five minute walk away along Brückenstraße, at Obenmarspforten 21. 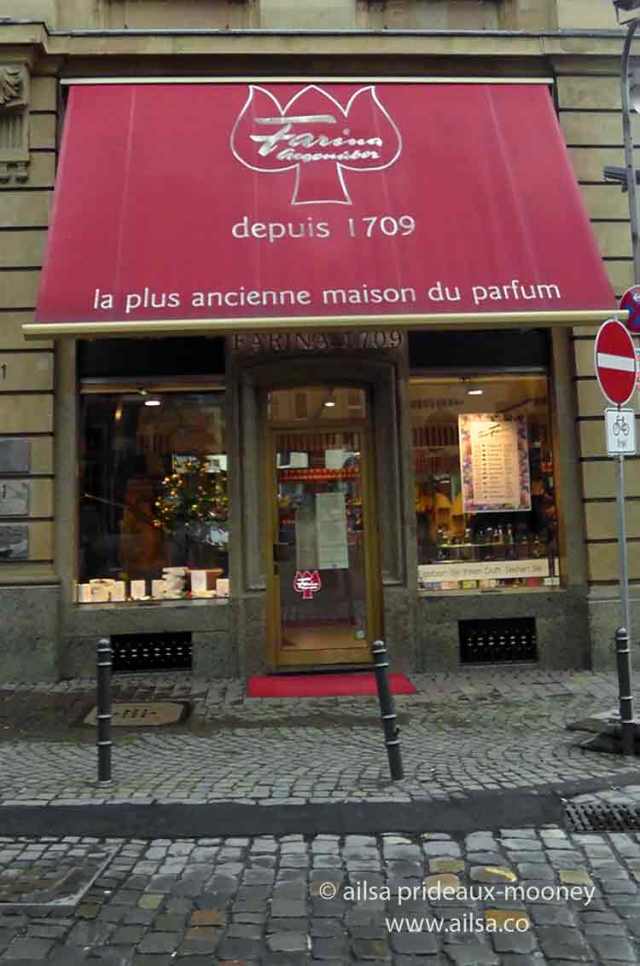 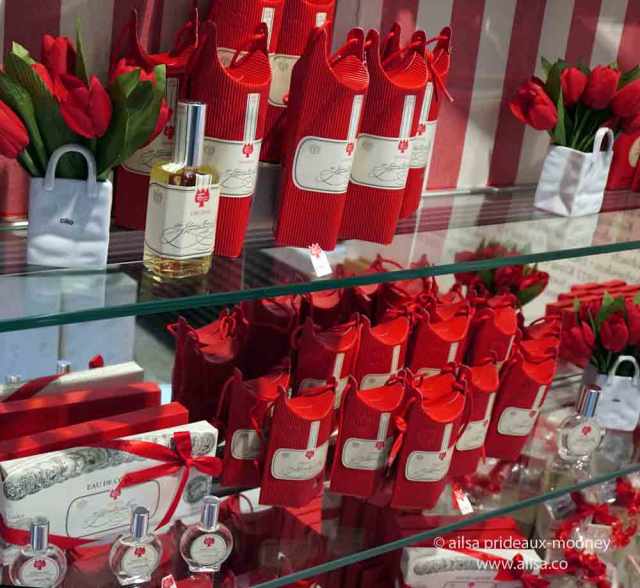 The Farina Haus is home to a perfume museum where, for €5, you can spend an hour in the company of Giovanni Maria Farina as he takes you on a tour of the old salon where the rich and famous would place their orders, teaches you a little of the art of perfume making and tests your olfactory abilities to identify scents in the perfume laboratories of old.  Our ‘Giovanni’ was played with comic glee by the charming Tim in full period dress. 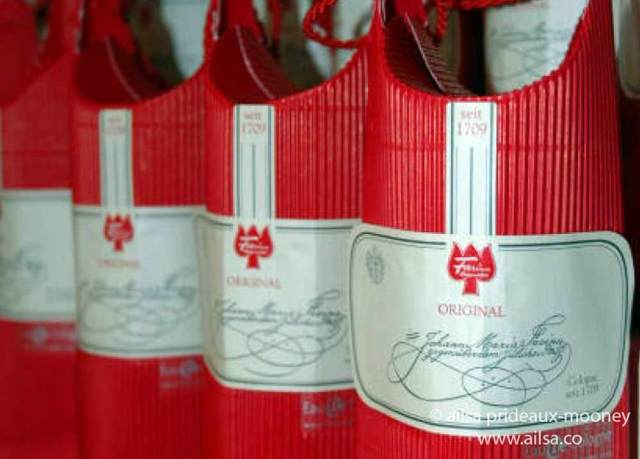 … and everyone was presented with a parting gift. I won’t tell you what the gift was, but I will let you know it reminded me of a spring morning in Italy, of wild narcissi and sweet orange blossom just after the rain. 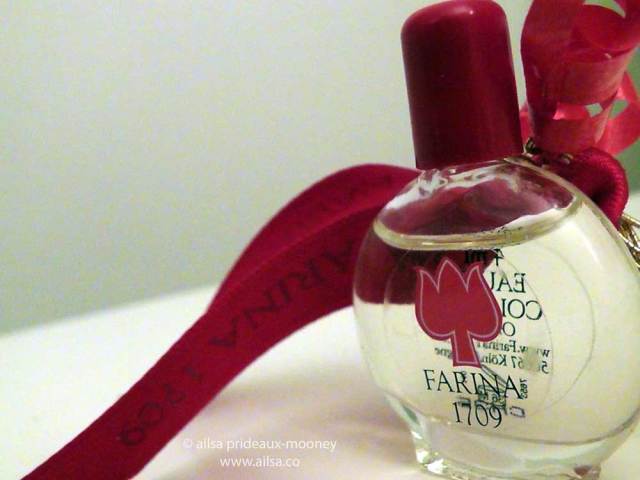 16 Responses to Scent and Subterfuge