You don’t have to look far to find Gian Lorenzo Bernini’s legacy in Rome. Evidence of his genius is everywhere, from the fountain at the base of the Spanish Steps to the sculptures in the Chigi chapel and the Ponte Sant’Angelo. His sculptures of popes, cherubs and mythological figures brim with vigour and passion, but my absolute favourite of his sculptures is much more low key. Tucked in neatly behind the Pantheon there is a gem of a Gothic church called Santa Maria sopra Minerva (St. Mary above Minerva). The name comes from the location; it was built in 1280 over the site of a temple to Minerva. The church itself houses a wealth of extraordinary art but my heart broke into a million tiny pieces at the sight of Bernini’s little elephant standing at the bottom of the obelisk in the piazza outside. 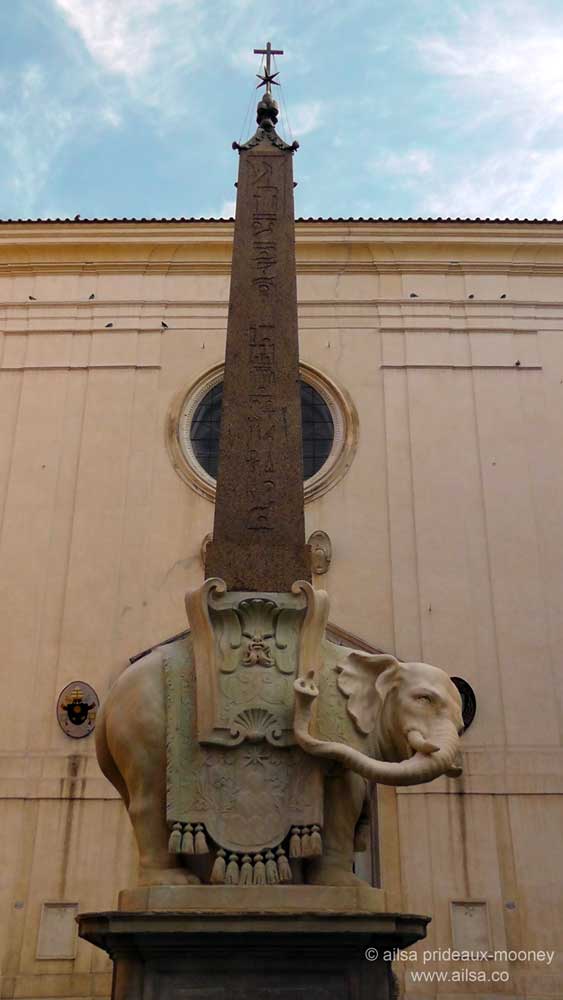 Officially known as Elephant and Obelisk, it was commissioned by Pope Alexander VII when an obelisk was discovered in the garden of the adjacent Dominican monastery in 1665. Not only was the church built above a temple to Minerva; it would appear the temple to Minerva was built above or near an Iseum, an Egyptian-inspired cult worshipping the goddesses Isis and Serapis.For some reason the pope wanted the obelisk displayed in the piazza and called for architects to submit designs for the base of the obelisk.

One of those submitting a design was a Dominican priest by the name of Father Domenico Paglia. His design was rejected in favour of Bernini’s elephant. When Bernini’s design was unveiled, Father Paglia, perhaps still smarting from his rejection, raised concerns about the stability and Bernini was forced to place a supporting block underneath the elephant’s torso. Bernini tried to obscure the block by adding the ornate saddle with tassels that hung down low but that made the elephant look squat and dumpy and he was never happy with the end result. It was said that he would avert his gaze when he passed by, and he omitted it from the list of his life’s work. Local Romans wasted no time making fun of the stocky little elephant, christening it Porcino della Minerva (Minerva’s piglet). Over the years it has morphed into Pulcino della Minerva (Minerva’s chick) – which it is still affectionately referred to as today.

A striking feature of the sculpture is the elephant’s head, turned quite markedly away from the church, leading some to speculate upon its meaning. It was here in 1633 that Galileo Galilei was summoned, held and interrogated by the infamous Inquisition in the adjacent Dominican monastery and forced to recant. There are those who believe the elephant’s shunning of the church was Bernini’s way of condemning their treatment of Galileo.

Bernini did manage to get his own back on the meddling Dominican priest. The statue is placed carefully in the Piazza della Minerva with its rear end facing the Dominican monastery. The elephant’s tail is shifted ever so delicately to the left, so every time Father Paglia exited the monastery, he was greeted with a very clear view of the elephant’s nether regions. 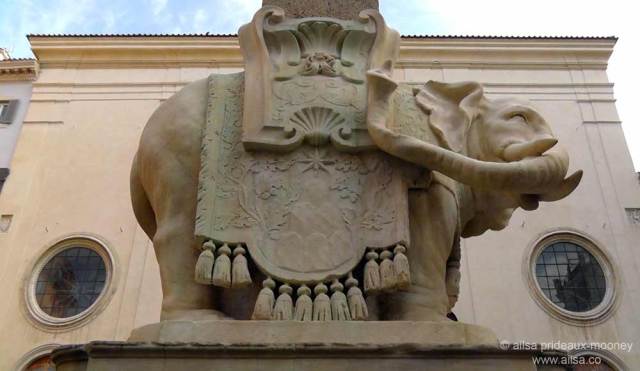 Hi there! I’m Ailsa Prideaux-Mooney. I’ve lived in many places, and travelled to many more. I had a lot of fun getting there and being there, wherever there happened to be at the time. I climbed a castle wall in Czesky Krumlov, abseiled down cliffs to go caving in the west of Ireland, slept on the beach in Paros, got chased by a swarm of bees in Vourvourou (ok that wasn’t fun, but it was exciting), learned flower arranging in Tokyo, found myself in the middle of a riot in Seoul, learned to snowboard in Salzburg, got lost in a labyrinth in Budapest and had my ice cream stolen by a gull in Cornwall. And I’m just getting started. If you’ve enjoyed what you’ve read so far, I’d love you to follow my travelogue - wheresmybackpack.com - and remember, anyone who tries to tell you it’s a small world hasn’t tried to see it all.
View all posts by ailsapm →
This entry was posted in Europe, Italy, Photography, Travel and tagged art, humor, photography, photos, pictures, travel, writing. Bookmark the permalink.