High up on Aventine Hill, overlooking Rome, lies a most unusual villa. It is the Villa del Priorato dei Cavalieri di Malta, belonging to the Knights of Malta, otherwise known as the Knights of St. John Hospitaler. 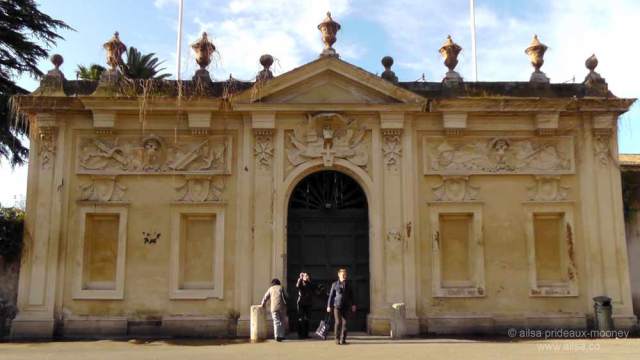 What makes it unusual is that the grounds of this ancient military order’s villa are recognized by the state of Italy as a sovereign nation. The villa serves as embassy for the Order of Malta to Italy and the Holy See. Three separate nations and three national capitals exist side by side within the boundaries of the city of Rome – Italy, the Vatican and the Knights of Malta.

More unusual still, you can view all three nations through one single keyhole, and that keyhole is found in the door to this villa.

…across Rome, to the dome of St. Peter’s basilica in Vatican City, in perfect alignment with the neatly manicured cypress hedges and the keyhole.

Now that’s what I call a view!

If you would like to see it for yourself, the villa is located on the top of Aventine Hill along Via di Santa Sabina at the Piazza dei Cavalieri di Malta.

Hi there! I’m Ailsa Prideaux-Mooney. I’ve lived in many places, and travelled to many more. I had a lot of fun getting there and being there, wherever there happened to be at the time. I climbed a castle wall in Czesky Krumlov, abseiled down cliffs to go caving in the west of Ireland, slept on the beach in Paros, got chased by a swarm of bees in Vourvourou (ok that wasn’t fun, but it was exciting), learned flower arranging in Tokyo, found myself in the middle of a riot in Seoul, learned to snowboard in Salzburg, got lost in a labyrinth in Budapest and had my ice cream stolen by a gull in Cornwall. And I’m just getting started. If you’ve enjoyed what you’ve read so far, I’d love you to follow my travelogue - wheresmybackpack.com - and remember, anyone who tries to tell you it’s a small world hasn’t tried to see it all.
View all posts by ailsapm →
This entry was posted in Italy, Photography, Travel, Travel tips and tagged architecture, gardens, history, photography, photos, pictures, travel, writing. Bookmark the permalink.

59 Responses to 3 nations through 1 keyhole