Boughs and Bushes on Beltane

I’ve twirled around a Maypole or two to celebrate May Day in years gone by, but this year, I went looking for a different tradition associated with the beginning of May and the Irish festival of Beltane. The custom of decorating a May bush, May bough or May tree was prevalent in rural Ireland; possibly the echoes of ancient tree worship.  The bush, decked with flowers, ribbon and painted egg-shells, was supposed to bring luck to the whole area. In the countryside the May bush was placed outside the front door of the house; in villages it was more usual to find a May bush erected in communal areas for all to share.  In some locales it was the practice to carry the decorated May bush past all of the houses in the area, to spread the luck around.  In cities, children would carry the bush from door to door, singing ‘Long Life, a pretty wife and a candle for the May Bush’. Candles were not really what they were looking for, though. Sweets and money were much more welcome. 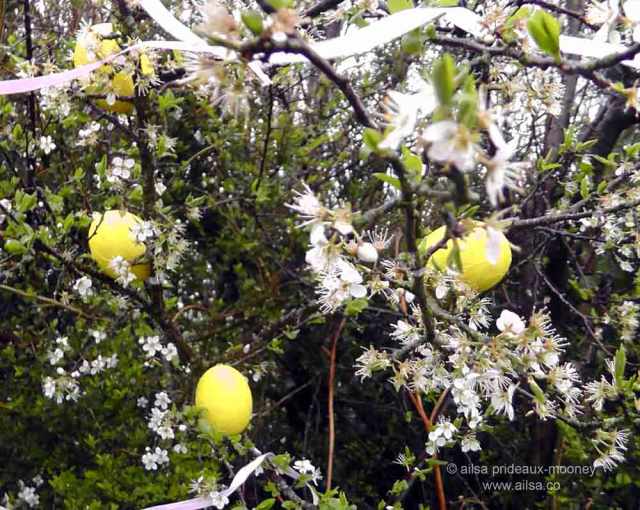 Naturally enough, competition was fierce to have the prettiest, best decorated May bush around, and sometimes a May bush would be stolen by a rival party. In Dublin, towards the end of the 18th century, things got way out of hand, with rioting and violent clashes between two notorious gangs, the northside Ormond Boys and southside Liberty Boys. They spoiled it for everyone; by 1775 a law had been passed that imposed hefty fines on May bush revelry.

I have heard tell that the tradition still survives in certain parts of the country, particularly in the Midlands, but when I went looking around the Leinster area I found not a single trace of what was once a most lovely tradition. Unrequited, I determined to revive the May bush single-handed, armed with an armful of hastily painted eggshells and some wildlife-friendly biodegradable crepe paper. Rather than chop off a branch or unearth a shrub, I decided to decorate a hedgerow bush and let it stand proud and glorious for all to see. 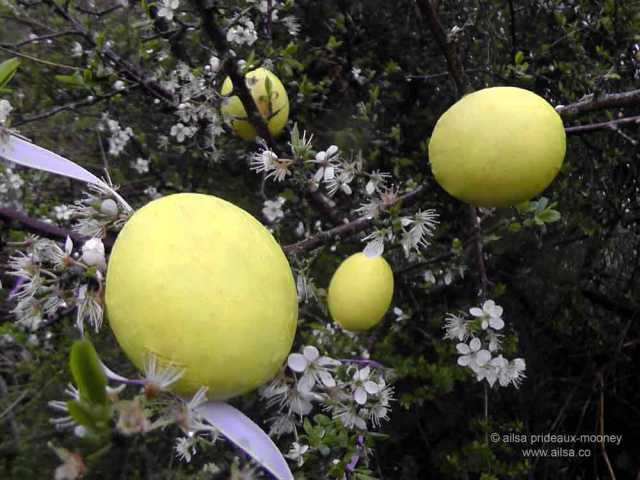 Maybe if enough people see it, this time next year the countryside will be a whirl of decoration and the May bush will thrive once more.

Hi there! I’m Ailsa Prideaux-Mooney. I’ve lived in many places, and travelled to many more. I had a lot of fun getting there and being there, wherever there happened to be at the time. I climbed a castle wall in Czesky Krumlov, abseiled down cliffs to go caving in the west of Ireland, slept on the beach in Paros, got chased by a swarm of bees in Vourvourou (ok that wasn’t fun, but it was exciting), learned flower arranging in Tokyo, found myself in the middle of a riot in Seoul, learned to snowboard in Salzburg, got lost in a labyrinth in Budapest and had my ice cream stolen by a gull in Cornwall. And I’m just getting started. If you’ve enjoyed what you’ve read so far, I’d love you to follow my travelogue - wheresmybackpack.com - and remember, anyone who tries to tell you it’s a small world hasn’t tried to see it all.
View all posts by ailsapm →
This entry was posted in Ireland, Photography, Travel and tagged culture, history, inspiration, photography, photos, pictures, travel, writing. Bookmark the permalink.

7 Responses to Boughs and Bushes on Beltane