My vote for best place to fly a kite in Seattle goes to Magnuson Park’s Kite Hill. My pal Sylvia and I took her dogs for a ramble there last week and explored a small part of this huge park as we watched kites swoop and dive through sunbeams overhead.

As you ramble along leafy lanes, skirt glassy ponds, traverse lush wetlands and drift through wildflower meadows, it’s hard to believe that this land was once a tangle of concrete and tarmac brimming with runways and barracks. Up until the 1970s Sand Point peninsula was owned by the military and home to a huge naval airfield and military base, which at the height of WW2 covered 537 acres. Today, the northern tip of the peninsula houses NOAA (National Oceanic and Atmospheric Administration) and the other 350 acres have been transformed into nature’s playground, bursting with wildflowers and teeming with wildlife. Kite Hill was constructed out of runway rubble, but to look at it today you’d never guess it.

Just past Kite Hill we found the Fin Project, a strikingly beautiful and moving artwork.

Echoing the park’s naval past, the fins are diving plane fins from decommissioned US Navy attack submarines, but they are assembled to simulate the dorsal fins of a pod of Orca whales, or a school of salmon. The artwork’s tagline, “From Swords into Plowshares” is taken from the Old Testament – “and they shall beat their swords into plowshares, and their spears into pruning hooks: nation shall not lift up sword against nation, neither shall they learn war any more” – and underscores the call for peace this installation conveys by recycling weapons into art.

Doubling back along the shoreline, we found ourselves immersed in some of the park’s newer features; beautifully designed wetlands and shore ponds that provide a safe haven for all kinds of wildlife. 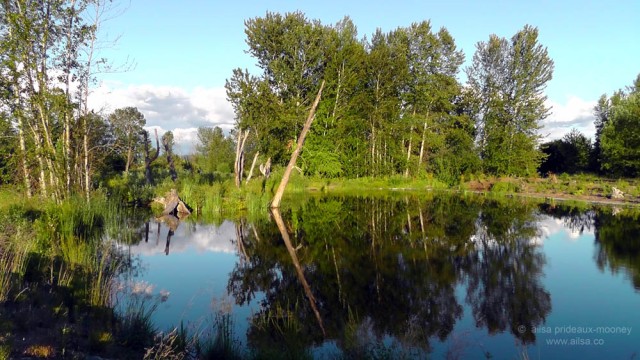 We ate a picnic lunch and gazed at the mirror-like ponds until our reverie was interrupted by a rowdy group of ducklings out for a cruise with their parents, who churned the glassy waters into a frenzy of ripples.

Further along we followed a trail through wildflower meadows… 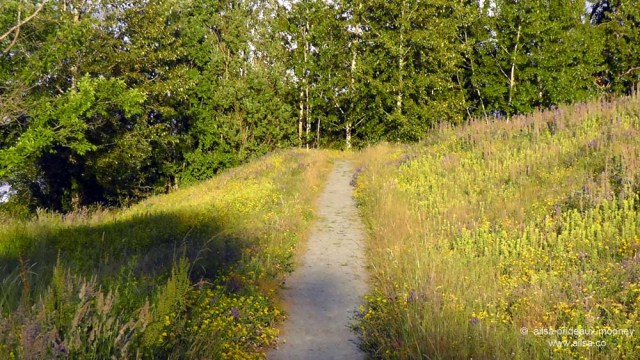 .. filled with covert birds hiding out amongst the blossoms…

…before disappearing in a flutter of feathers.

Our last stop was a hike up Kite Hill to watch the sun set. If I’d had a kite with me, I would have flown it. 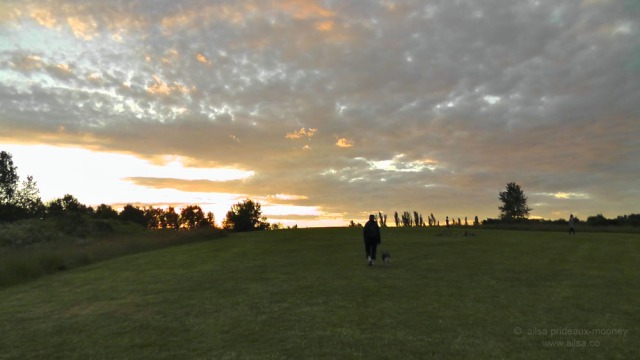 If you’re visiting Seattle, take a little break from city life and explore this fabulous park. Bring a picnic lunch. And a kite!

Hi there! I’m Ailsa Prideaux-Mooney. I’ve lived in many places, and travelled to many more. I had a lot of fun getting there and being there, wherever there happened to be at the time. I climbed a castle wall in Czesky Krumlov, abseiled down cliffs to go caving in the west of Ireland, slept on the beach in Paros, got chased by a swarm of bees in Vourvourou (ok that wasn’t fun, but it was exciting), learned flower arranging in Tokyo, found myself in the middle of a riot in Seoul, learned to snowboard in Salzburg, got lost in a labyrinth in Budapest and had my ice cream stolen by a gull in Cornwall. And I’m just getting started. If you’ve enjoyed what you’ve read so far, I’d love you to follow my travelogue - wheresmybackpack.com - and remember, anyone who tries to tell you it’s a small world hasn’t tried to see it all.
View all posts by ailsapm →
This entry was posted in Photography, Travel, United States, Washington and tagged art, environment, nature, photography, photos, pictures, travel, writing. Bookmark the permalink.