The next morning found our truck and all our belongings safe and sound, just as the security guards had promised us the night before. We didn’t waste any time getting back on the road; Jill was longing to reach the ocean. The route we had planned meant we would be lucky to reach the Lost Coast by nightfall, but we set off with great expectations nonetheless, rushing out of Salinas just as Steinbeck did in his Travels with Charley. As I watched the outskirts of Salinas drift into the distance, I thought of Steinbeck’s poignant observation that ‘you can’t go home again because home has ceased to exist except in the mothballs of memory.’ I sense that this was the profoundest discovery he made on his trip; subsequent chapters seemed to be tinged with disappointment as he wound his way back across the country.

We took 101 North and in no time were engulfed by the urban sprawl of San Jose. Every couple of miles, cast iron mission bells on the side of the highway marked the supposed route of El Camino Real, an historic trail which connected missions, pueblos and presidios along a 600 mile stretch of the California coast. The Santa Clara Valley through which we now drove was once one of the foremost agricultural regions in the world; thick with orchards and vineyards and flowers. The Valley of Heart’s Delight, as it was once known, bears little resemblance today to its not so distant past, thanks to the explosive growth of the computer industry, the internet and the silicon-based microprocessor responsible for the valley’s more recent monicker; Silicon Valley. We drove past cities bearing names drawn from nature, now synonymous with globally recognizable companies: Google’s Mountain View, Facebook’s Palo Alto and Oracle’s Redwood City.

In what seemed like minutes, we entered the city limits of San Francisco, where 101 takes a delightful little jog through the heart of the city. We left 101 briefly on the north side of town so we could get out and stretch our legs. A sailboat floated by on turquoise water and the sun shone brightly. It was a beautiful day. 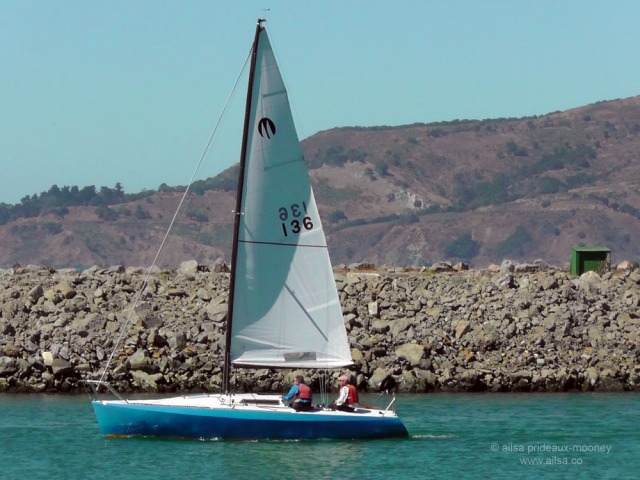 Jill wandered over to a portable bathroom close to the water’s edge; it had been a while since the last gas station, but she turned away with a look of horror on her face. “That’s just not right” she said, aghast, and peeping through the door, I had to agree. It was like the aftermath of a war in there; a really nasty war where opposing armies flung soiled diapers and wads of used toilet paper at each other, peed in each others shoes and left syringes floating in pools of disturbing brown liquid. It was the Battle of Armageddon in a Honey Bucket. We decided to wait until the next gas station.

Jill decided to cheer herself up after the porta-potty incident by taking a short detour through the streets of San Francisco. While she waxed lyrical about the cute little houses lining the streets, I marvelled at the insane inclines of the streets which have given us some of the most spectacular car chases in the history of cinema. 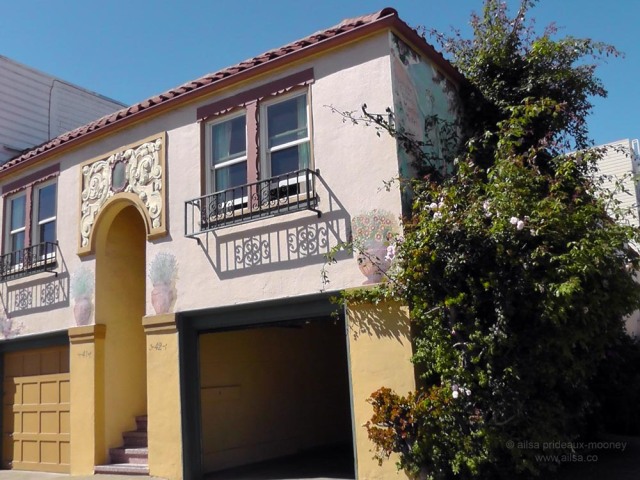 We had a quick wander around the lagoon in front of the beautiful Beaux-Arts Palace of Fine Arts, soaking up the San Franciscan sunshine before getting back on the road. 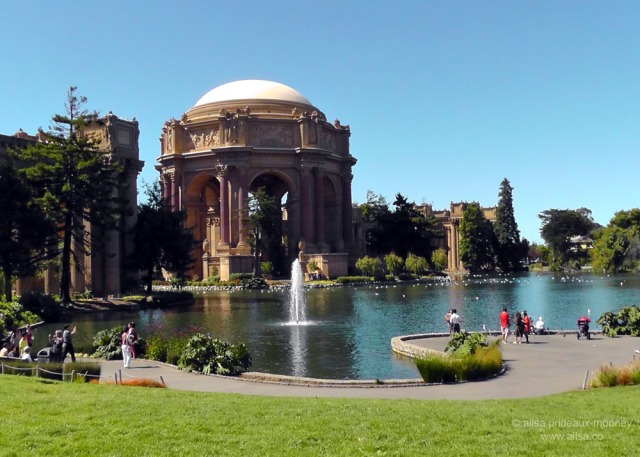 As highway 101 skirted the top of San Francisco’s Presidio, I caught a glimpse of the Golden Gate Bridge out the window.

Checking the map, I realized we were going to cross it on our way out of town. Both highway 101 and state route 1 cross the bridge – actually, technically, both roads stop 1,000 feet south of the toll plaza and pick up again on the north side where it touches land – but that’s just silly. Sillier still is that the bridge is not considered part of the state highway system, but is considered part of the national highway system.

The bridge flashed its trademark shade of high visibility international orange, which looks more red than orange, as we drove across. It gets its name from the 3 mile stretch of water, the Golden Gate Straits, that connects San Francisco Bay to the Pacific; a wise choice – the International Orange Bridge sounds far less commanding. 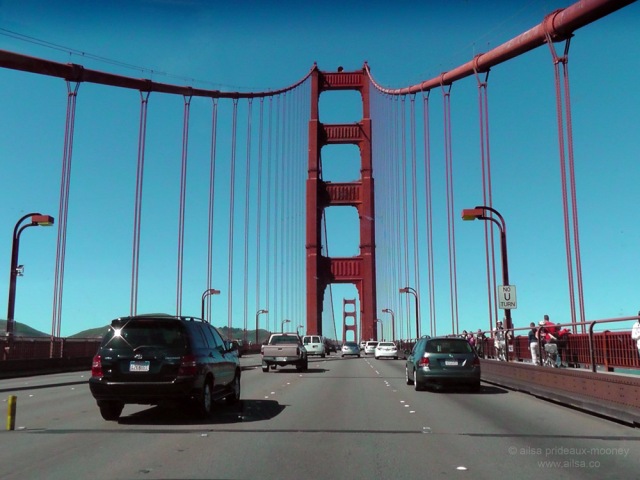 Halfway across the bridge I looked out the window, suddenly remembering San Francisco’s involvement in the demise of the ever-contentious Hetch Hetchy Valley, about 200 miles due east of the Golden Gate Bridge. This glacial valley in the northwest corner of Yosemite National Park was hailed by naturalist John Muir as “one of nature’s rarest and most precious mountain mansions.” It was home to an extraordinarily diverse ecosystem and a wealth of wildlife. Officially within the boundaries of Yosemite National Park, it should have been afforded protection from greedy developers but unfortunately, National Parks at that time were under the jurisdiction of the Forest Service, who saw (and still see) their role as resource management rather than conservation, preservation and protection.  The City of San Francisco had its beady eye fixed firmly on the valley, lobbying Congress for the right to dam the Tuolumne River and flood the valley as a reservoir. Muir and the Sierra Club fought it, but after seven long, bitterly-contested years, Woodrow Wilson passed the Raker Act in 1913, the dam was built and Hetch Hetchy was lost.

But the story doesn’t end there. There are grassroots environmental organizations pushing to restore Hetch Hetchy to its former glory. As recently as November 2012, a proposal that the city investigate alternative power and water sources, paving the way for restoring the valley, was voted upon by San Franciscans. 77% voted to keep Hetch Hetchy underwater. The fight continues.

Pushing north, golden hills bore traces of what looked like controlled burns; the sharply etched lines of the scorched earth were too neat to be random.

Then the golden tones gave way to the lushest of greens as we tumbled into wine country. Acres of neatly trussed vines danced by; the orderly rows creating ripples that seemed to ebb and flow up hillsides and down valleys, twirling around slopes like ruffled taffeta. 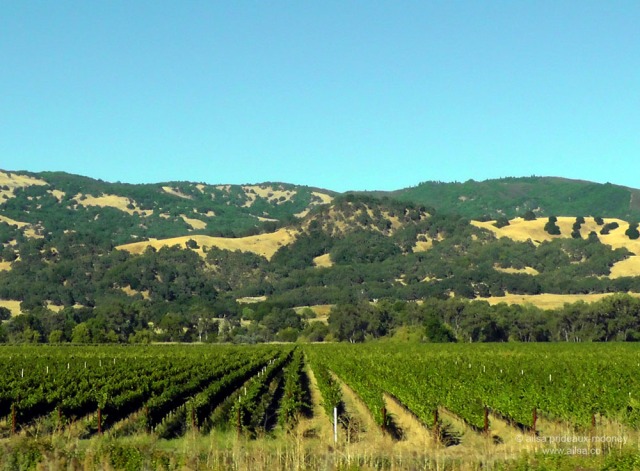 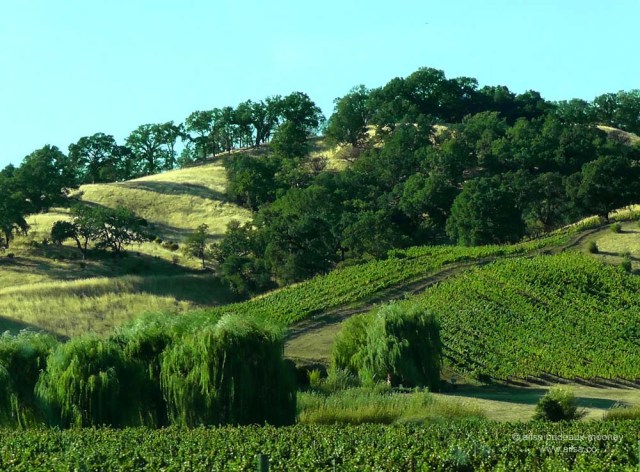 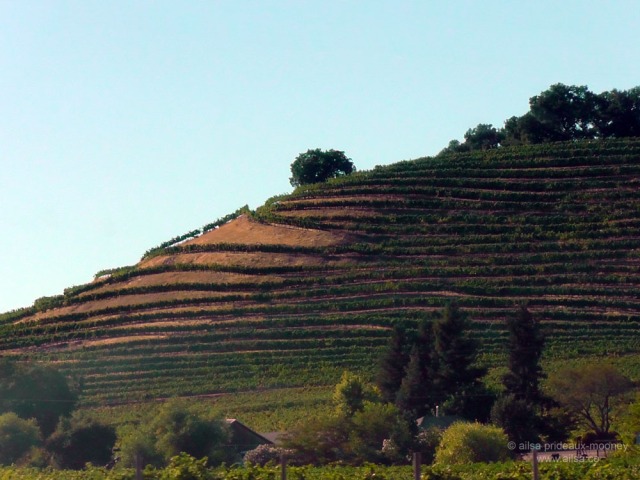 Further north still, as daylight began to dim, the vineyards were replaced by thick forest on both sides. Jill was beginning to despair that we would never reach the ocean. We were still miles from the Lost Coast and when we pulled over at a rest stop and got talking to some locals, they told us the road down to the coast was not one to be driven after dark. 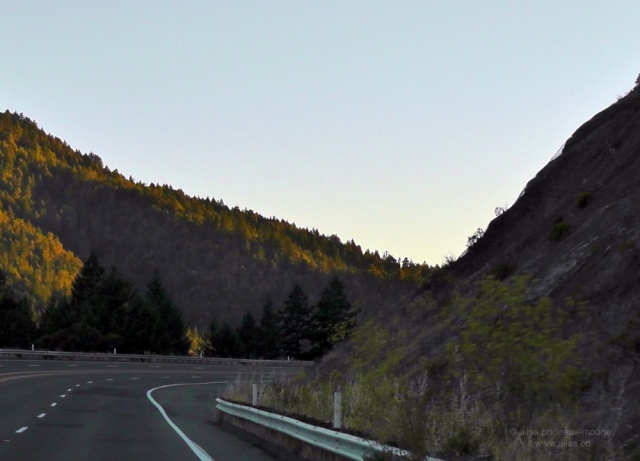 Defeated, we decided to camp for the night in Richardson Grove State Park, just a little south of the turnoff for the Lost Coast. On our way, we stopped off at a quirky little store called The Peg House for firewood. It had an eclectic assortment of vehicles outside and a sign that read “Never don’t stop”. 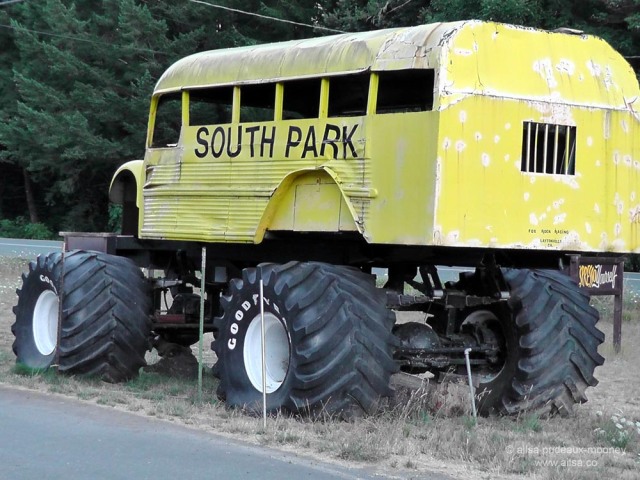 It was dark by the time we pulled into the camp site, but we were now seasoned professionals at pitching the tent at night. Foxes scurried around as we got the campfire started and rustled up dinner. Substantially larger-sounding creatures rustled in the bushes as we huddled by the flames, and Jill, watching as I shifted my chair closer to the fire, reminded me that everything sounds big in the forest at night. I smiled wanly, my thoughts skipping back to Christmas dinner the previous year in Ireland. As we had been tucking in to my sister-in-law’s delicious meal, we had switched on the BBC and listened to a wildlife expert explaining the different methods of defending yourself against bear attacks. “With a black bear, fight back, kicking and punching it in the nose if possible” he had advised. “If you’re being attacked by a grizzly, play dead.” “What about polar bears?” the interviewer had inquired cheerily. “You can do whatever you like” the expert had replied, laughing uproariously. “Play dead, fight back, it doesn’t matter. You’re going to die.”

There was a bright silvery moon but the forest was so thick its rays barely penetrated the branches overhead. We cracked open a bottle of Chilean wine and as I drained my glass, the cork glowed in the firelight. The word Diablo stood out in sharp relief. Jill started to get jittery because she was convinced I was going to sleep in the car and leave her alone in the tent. To reassure me that sleeping in the tent would be fine, she produced a bottle of bear-strength pepper spray and shoved it in an overhead pocket. Of course, it had the opposite effect. I figured if Jill thought our surroundings merited pepper spray, we were in deep doo-doo. Bear doo-doo, to be precise. As the bushes continued rustling merrily around us, I stoically poured myself another massive glass of wine because it was the only way I was going to get any sleep tonight.

Here’s a short clip of our trip today:

Hi there! I’m Ailsa Prideaux-Mooney. I’ve lived in many places, and travelled to many more. I had a lot of fun getting there and being there, wherever there happened to be at the time. I climbed a castle wall in Czesky Krumlov, abseiled down cliffs to go caving in the west of Ireland, slept on the beach in Paros, got chased by a swarm of bees in Vourvourou (ok that wasn’t fun, but it was exciting), learned flower arranging in Tokyo, found myself in the middle of a riot in Seoul, learned to snowboard in Salzburg, got lost in a labyrinth in Budapest and had my ice cream stolen by a gull in Cornwall. And I’m just getting started. If you’ve enjoyed what you’ve read so far, I’d love you to follow my travelogue - wheresmybackpack.com - and remember, anyone who tries to tell you it’s a small world hasn’t tried to see it all.
View all posts by ailsapm →
This entry was posted in California, Photography, Travel, United States and tagged environment, history, humor, nature, photography, travel, writing. Bookmark the permalink.