It’s hard to beat the soaring majesty of mountains. It’s also apparently hard to define exactly what a mountain is. Countries around the globe use factors such as height, elevation, relief and volume in a vain attempt to define them. The Oxford English Dictionary settles for something suitably vague: “a natural elevation of the earth surface rising more or less abruptly from the surrounding level and attaining an altitude which, relatively to the adjacent elevation, is impressive or notable.” Merriam-Webster doesn’t do any better: “a landmass that projects conspicuously above its surroundings and is higher than a hill.” Look up ‘hill’ in the same dictionary and you will find that it is described, helpfully, as “lower than a mountain.”

However you define them, mountains are some of the best places to look for snow. For the past two years winter has seemed determined to pass me by. Last year, New York was unseasonably warm and disappointingly snow-free; this year Seattle‘s rain and suggestion of frost has been equally underwhelming so I decided that if winter wouldn’t come to me, I would go to winter. Yesterday, my friend Sylvia and I headed north to the mountains near Granite Pass and there, in all its snowy glory, we found winter. Here are some of the snow-capped peaks that greeted us.

“Mountains have a way of dealing with overconfidence.” – Nemann Buhl

“No matter how sophisticated you may be, a large granite mountain cannot be denied – it speaks in silence to the very core of your being.” – Ansel Adams

“Thousands of tired, nerve-shaken, over-civilized people are beginning to find out that going to the mountain is going home; that wildness is necessity; that mountain parks and reservations are useful not only as fountains of timber and irrigating rivers, but as fountains of life.” – John Muir 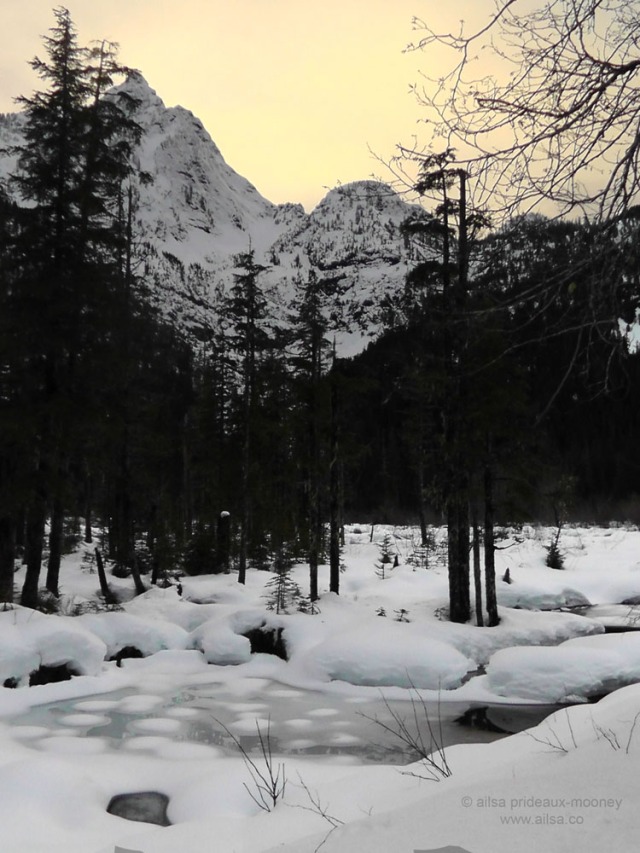 Have you seen any soaring summits or peaked pinnacles recently? If you would like to join in the travel theme (everyone’s welcome!) here’s what to do:

Hi there! I’m Ailsa Prideaux-Mooney. I’ve lived in many places, and travelled to many more. I had a lot of fun getting there and being there, wherever there happened to be at the time. I climbed a castle wall in Czesky Krumlov, abseiled down cliffs to go caving in the west of Ireland, slept on the beach in Paros, got chased by a swarm of bees in Vourvourou (ok that wasn’t fun, but it was exciting), learned flower arranging in Tokyo, found myself in the middle of a riot in Seoul, learned to snowboard in Salzburg, got lost in a labyrinth in Budapest and had my ice cream stolen by a gull in Cornwall. And I’m just getting started. If you’ve enjoyed what you’ve read so far, I’d love you to follow my travelogue - wheresmybackpack.com - and remember, anyone who tries to tell you it’s a small world hasn’t tried to see it all.
View all posts by ailsapm →
This entry was posted in Weekly Travel Themes and tagged environment, nature, photography, photos, pictures, travel, writing. Bookmark the permalink.