I just experienced my very first traditional Greek Easter, and I didn’t even have to go to Greece. Instead, I headed out to Long Island with a Greek friend of mine who had generously invited me to join in her family’s celebrations.

It was a sumptuous affair, complete with all the traditional elements of a Greek Easter, and here are some of my favourites:

Bright red eggs. Everybody gets one and then a traditional game called tsougrisma is played. It reminded me a lot of the game of conkers we played in Ireland as kids. Everybody pairs up and hits the other person’s egg with theirs – top to top and bottom to bottom. Once your egg is smashed on both ends, you’re out. The winner then moves on to the next person with an uncracked egg and the game begins again, until there is only one person left with an uncracked egg. The winner left holding the good egg is destined to have a very lucky year. My egg got smushed in the first round. 🙂

Tsoureki – the traditional bread of Greek Easter celebrations; it is a sweet eggy yeast bread flavoured with orange and exotic ingredients such as mahlepi (made from ground cherry stones) and mastiha (ground resin from Mastic trees that grow on Chios). The little pearls of resin, before they are ground up, are called Tears of Mastic, because legend has it the mastic trees started weeping when Romans tortured and killed Agios Isidoros, an Egyptian living in Chios, for worshipping at a Christian church. Tragic as the legend of mastiha may be, it lends an exotic flavour to this sweet, gently-fragranced and delicious bread, which is braided in a circle and has a red egg baked into the top. 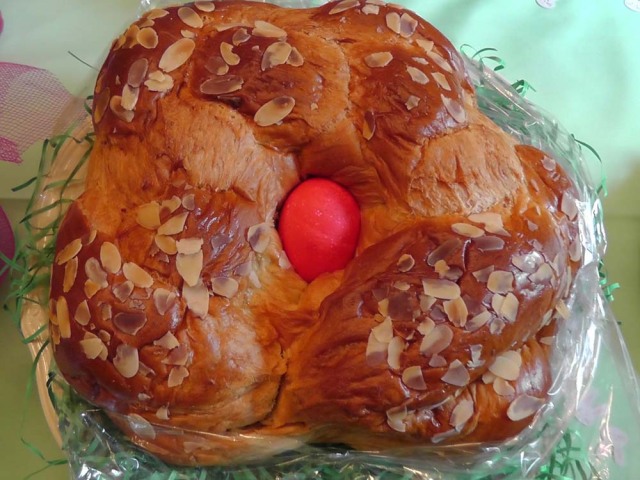 Spanakopita – now I’ve had spanakopita before, in fact I practically lived off that and watermelon during my times in Greece, but I’ve never had the home-made variety. The filo pastry was melt-in-your-mouth magic, with just the right ratio of cheese to spinach and drizzled with delicately-flavoured olive oil. 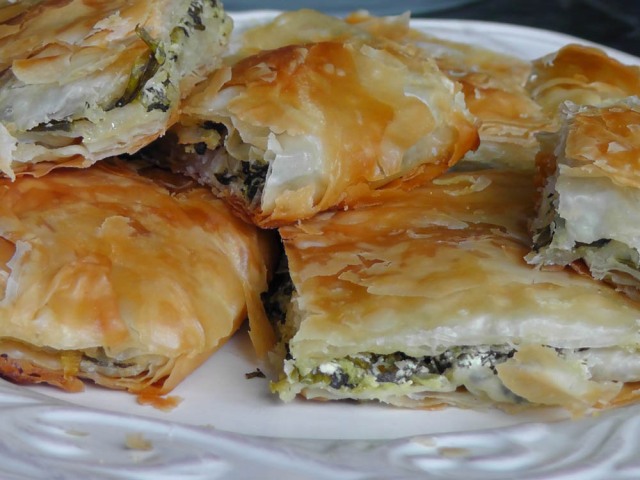 And last, but certainly not least, another divine filo creation, Galaktobouriko. The creamiest of custards, semolina-based, is sandwiched between flaky filo and drizzled with syrup. The key to this pastry’s success was that it wasn’t overly sweet. All too often I find custard-based pastries cloyingly sugary,  but here the egg custard had only a suggestion of sweetness, allowing the other flavours to shine.  It was ridiculously delicious and impossible to resist having a second piece. Admittedly, I didn’t try very hard to resist. 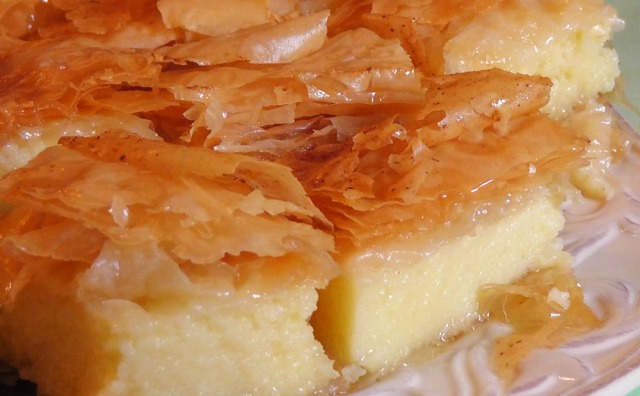 That reminds me, I have got to email my friend for the recipe. Happy Greek Easter, everyone.

Hi there! I’m Ailsa Prideaux-Mooney. I’ve lived in many places, and travelled to many more. I had a lot of fun getting there and being there, wherever there happened to be at the time. I climbed a castle wall in Czesky Krumlov, abseiled down cliffs to go caving in the west of Ireland, slept on the beach in Paros, got chased by a swarm of bees in Vourvourou (ok that wasn’t fun, but it was exciting), learned flower arranging in Tokyo, found myself in the middle of a riot in Seoul, learned to snowboard in Salzburg, got lost in a labyrinth in Budapest and had my ice cream stolen by a gull in Cornwall. And I’m just getting started. If you’ve enjoyed what you’ve read so far, I’d love you to follow my travelogue - wheresmybackpack.com - and remember, anyone who tries to tell you it’s a small world hasn’t tried to see it all.
View all posts by ailsapm →
This entry was posted in Photography, Travel and tagged food, holidays, photography, photos, pictures, postaday, travel, writing. Bookmark the permalink.

4 Responses to My first Greek Easter