The luck of the Irish to you all on this fine (well, blustery and rainy) St. Patrick’s Day. Seeing as the four-leafed clover is synonymous with this holiday I thought I’d go with lucky number four for this week’s theme, starting off with four frankly scary Nutcrackers in Leavenworth.

Four May Day revelers in Seattle. 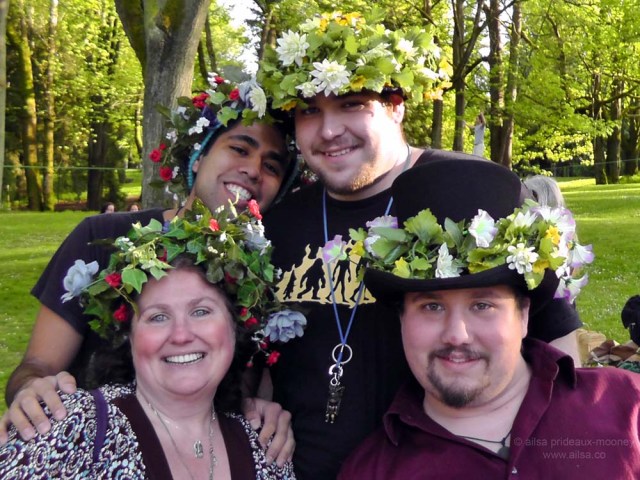 Four birds chilling in a Staten Island park. EDIT: Or is it five.. as the more eagle-eyed amongst you have suggested?  😉

Have you got any lucky fours to share? If you would like to join in with your own interpretation of this week’s theme (everyone’s welcome!) here’s what to do:

❤ Ailsa    PS for a story about St. Patrick you might not have heard, check out this post.

In America the President reigns for four years, and Journalism governs for ever and ever. – Oscar Wilde

Hi there! I’m Ailsa Prideaux-Mooney. I’ve lived in many places, and travelled to many more. I had a lot of fun getting there and being there, wherever there happened to be at the time. I climbed a castle wall in Czesky Krumlov, abseiled down cliffs to go caving in the west of Ireland, slept on the beach in Paros, got chased by a swarm of bees in Vourvourou (ok that wasn’t fun, but it was exciting), learned flower arranging in Tokyo, found myself in the middle of a riot in Seoul, learned to snowboard in Salzburg, got lost in a labyrinth in Budapest and had my ice cream stolen by a gull in Cornwall. And I’m just getting started. If you’ve enjoyed what you’ve read so far, I’d love you to follow my travelogue - wheresmybackpack.com - and remember, anyone who tries to tell you it’s a small world hasn’t tried to see it all.
View all posts by ailsapm →
This entry was posted in Photography, Travel, Weekly Travel Themes and tagged humor, inspiration, photos, pictures, postaday, st patrick's day, travel, weekly photo challenge, writing. Bookmark the permalink.