There’s a fabulous new art exhibit at Seattle Center that I’m hoping is here to stay because it’s so much fun. Created by artist and sculptor Dan Corson, Sonic Bloom consists of five giant solar-powered flowers reaching up to 40 feet in height. During the day, the solar panels in the flowers soak up the Seattle sunshine – yes, the sun does come out in Seattle on occasion. In fact, that’s one of the underlying messages of this exhibit, highlighting the fact that solar power is an effective alternative to traditional power sources, even in a city as overcast as Seattle. 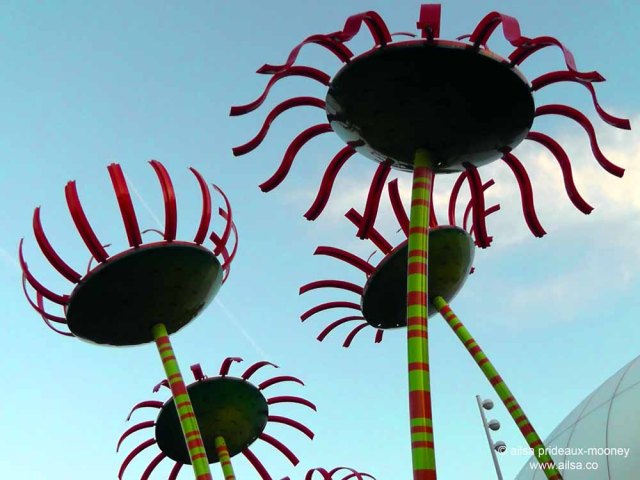 At night, however, the exhibit really comes into its own, when the huge flowers light up in waves of colour, powered by the solar energy it absorbs during the day. 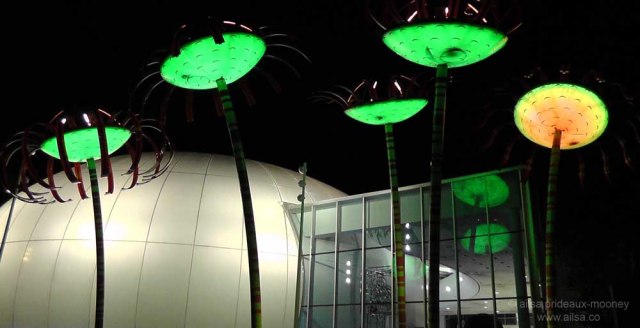 If that’s not enough, they also sing. Sensors in each flower are triggered by the movements of passing pedestrians and emit a series of harmonic tones which sounds like a choir humming. Check them out in action here:

There’s no admission fee and it’s open 24 x 7 so you have no excuse for not visiting this fantastic exhibit when you’re in town. Green, eco-friendly and a whole lot of fun. That’s my kind of flower power!

Hi there! I’m Ailsa Prideaux-Mooney. I’ve lived in many places, and travelled to many more. I had a lot of fun getting there and being there, wherever there happened to be at the time. I climbed a castle wall in Czesky Krumlov, abseiled down cliffs to go caving in the west of Ireland, slept on the beach in Paros, got chased by a swarm of bees in Vourvourou (ok that wasn’t fun, but it was exciting), learned flower arranging in Tokyo, found myself in the middle of a riot in Seoul, learned to snowboard in Salzburg, got lost in a labyrinth in Budapest and had my ice cream stolen by a gull in Cornwall. And I’m just getting started. If you’ve enjoyed what you’ve read so far, I’d love you to follow my travelogue - wheresmybackpack.com - and remember, anyone who tries to tell you it’s a small world hasn’t tried to see it all.
View all posts by ailsapm →
This entry was posted in Photography, Travel, United States, Washington and tagged art, environment, inspiration, photography, photos, pictures, travel, writing. Bookmark the permalink.