Refreshed after a lazy hour in the sun by Bumping Lake, we set off once more along the loop back towards Mount Rainier. We stopped for a quick amble at Sawmill Flats Interpretive Trail; a gentle meander through Ponderosa pines peppered with flashy tiger lilies…

…and then made our way down Forest Service Road 1706 for a slightly more strenuous hike to see Boulder Cave. After a steep climb through sparkling green forest, we caught our first glimpse of the cave, nestled far below in a gully.

The ominously-named Devil’s Creek, which still flows through the cave, eroded sediment underneath a top layer of basalt which then collapsed into the narrow ravine, creating the cave. It is cold and dark and home to the only known population of Pacific Western Big-Eared Bats in Washington State. “To the bat cave” I declared as we wound our way down a steep incline. I’ve always wanted a reason to say that. According to literature written about these caves, the bats only take up residence during winter months but when we walked through in midsummer there were signs requesting visitors not to shine their flashlights on the ceiling as it could disturb the bats, and in the gloom of the caves I swore I saw some of the little guys hanging from the rocks overhead. The cave itself was a treat to walk through, with strange and wonderful rock formations and sudden gashes of daylight streaming through fissures in the upper layer of basalt.

We emerged near the bottom of a deep ravine with a lively river filling the air with white noise and clambered back up the steep slopes through thick forest back to the car. Where State Route 410 meets the Old Naches Highway we pulled over to take a quick look at Oak Creek Wildlife Area. It’s an easy spot to miss, because the Old Naches Highway turn off is right where 410 intersects with Highway 12, so we drove past it and had to turn back. In winter, this is a haven for wildlife lovers, as bighorn sheep and elk gather here by the hundreds to jostle for a turn at the feeding stations. In the height of summer, however, the wildlife were frolicking in the mountains beyond, for when we arrived it was so quiet you could have heard a pin drop. Instead, we spent some time soaking up the sun in the most glorious of surroundings; the air sweet with the scent of sage brush.

Now we followed Highway 12 to begin the White Pass Scenic Byway part of the loop back to Mount Rainier.

…and avenues of birch. 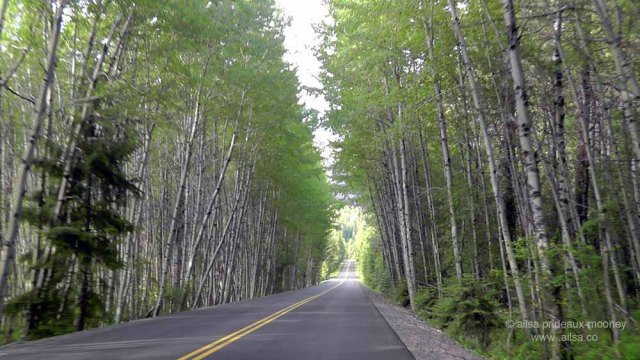 The day was drawing on, so we decided not to stop at Tieton Dam or Rimrock Lake but we couldn’t resist a quick wander around the shores of Clear Lake…

… and a quick peep at one of the most impressive waterfalls in the area, Clear Creek Falls. The waterfall slipped over the edge like a thick strand of silk and dropped an impressive 228 feet into a deep canyon. It was mesmerizing to watch; we sat enchanted for quite some time, munching on trail mix and listening to the crashing water below. 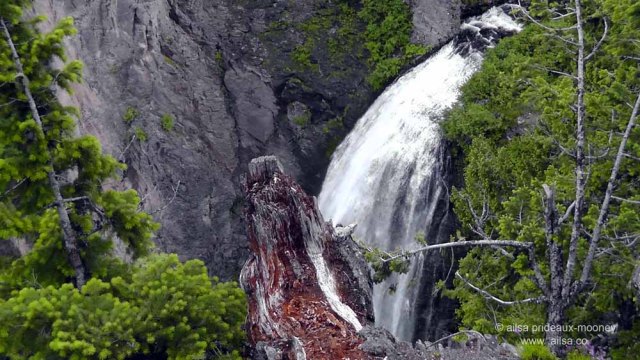 I had spotted something on the map that peaked my curiosity; a little lake just before White Pass called Dog Lake. With visions of hounds by the dozen doggy paddling in glacial waters, I suggested to Jo that we make one last stop before heading over the pass. We pulled into a tiny campground and drove down the hill towards the lake. I popped out of the car with my camera at the ready and trotted to the edge of the lake for a look. The air seemed oddly dark and strangely mobile. Too late, I realised there were swarms of mosquitoes descending upon me. Flailing like a windmill, I went careening back to the car and shut the door, forgetting we both had our windows rolled down. “Let’s get out of here” Jo shrieked and I nodded, swatting in vain at the sheets of mosquitoes pouring through the windows. We rolled up the windows and backed up, hoping to turn around, but a huge RV was trying to get situated in the camp site so we spent a miserable ten minutes waiting for them to park as we were slowly eaten alive.

Once we hit the open road again, we rolled down the windows and blasted the remaining mozzies out of the car. White Pass was disappointingly snow free and the ski lifts looked terribly forlorn against the grassy slopes. When I first heard of White Pass, I assumed it was named after the snow that adorns the slopes in winter – it boasts the driest powder in the Washington Cascades and averages over 300 inches of snow a year. In reality, it was named after Charles A. White who was one of the engineers tasked with exploring the area in 1878 to find a good spot for a railway route through the mountains. I tried taking a photo of the lifts as we drove by but just as I was about to click a persistent mosquito sank its bloodthirsty fangs into my cheek and I flinched, leading to a rather off-kilter shot. I could feign artistic inspiration but I’d be lying. Still, I kind of liked the result; it gives me vertigo just by looking at it. 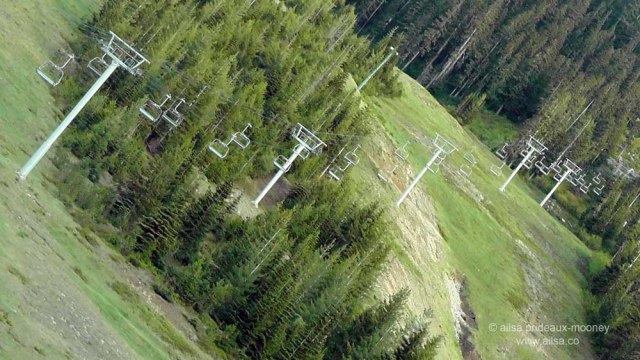 Up and over White Pass, there was a big reveal in store for us. We rounded the corner at Goat Rocks Viewpoint and our eyes opened wide with wonder, for there in front of us and bathed in kingly gold, stood Mount Rainier.

We stopped at the nearest pullout and sat on a stone wall watching the clouds swirl around Rainier’s majestic cone as the dying sun traveled towards the horizon and dipped out of sight. 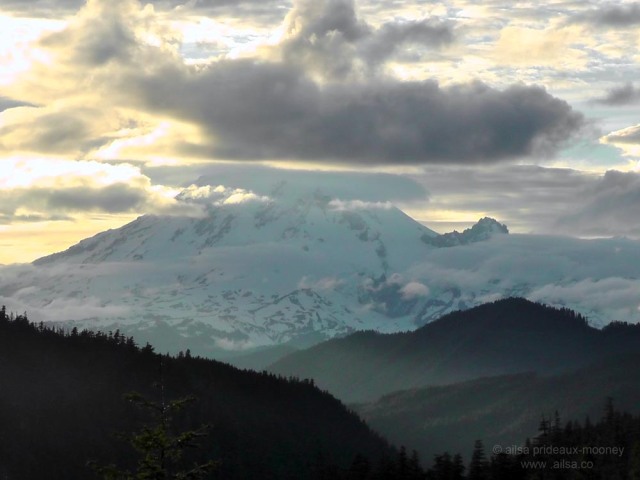 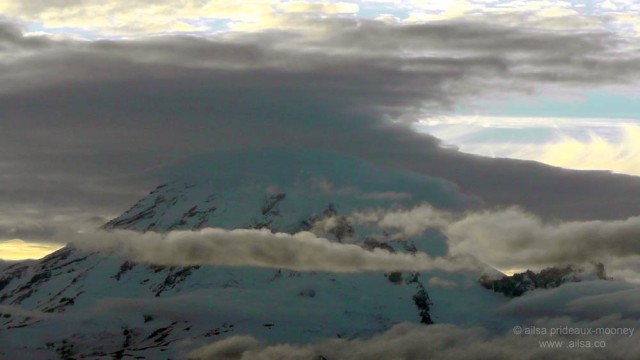 With the sun gone there was a distinct chill in the air so we pushed onward. Literature about the loop we had just done gave a drive time of 3 hours but with all the stops we had made along the way we had been on the road almost 8 hours and were getting tired. We made one final stop before we turned north towards our campsite for the night – a flying visit to see the Palisades; strange, fractured columns of ancient lava that lay buried for centuries until the Clear Fork of the Cowlitz River scoured away debris and lay them bare.

We passed through the small town of Packwood and stopped for a few provisions. I picked up a steaming hot veggie burger and fries at a local bar because I knew we weren’t going to be cooking and with the chill in the air seeping into my bones I wanted something hot to eat. Jo didn’t bother; she’d been pounding trail mix and almonds the entire way and wasn’t feeling hungry at all. I marveled at her ability to survive on nuts and trail mix. She was the stuff proper back country backpackers were made of.

It was such a pleasure to roll into our campsite and not have to worry about setting up. We played a few hands of cards at our picnic table as elk watched on, munching their supper before disappearing off into the undergrowth for the night.

We switched on our flashlights when it grew too dark to see the cards and we played late into the night, chatting and laughing as the spicy scent of pine enveloped us and the sounds of nighttime animals emanated from the forest. Then we couldn’t keep our eyes open one moment longer so we said goodnight and went to bed; Jo on the dry side of the leaky tent and me once more in the back seat of the car. It started to rain just as we turned in but we didn’t care, because weather forecasters had predicted in no uncertain terms that tomorrow would be clear and sunny. Tomorrow we would explore Mount Rainier.

Here’s a short video of some of today’s highlights.

Hi there! I’m Ailsa Prideaux-Mooney. I’ve lived in many places, and travelled to many more. I had a lot of fun getting there and being there, wherever there happened to be at the time. I climbed a castle wall in Czesky Krumlov, abseiled down cliffs to go caving in the west of Ireland, slept on the beach in Paros, got chased by a swarm of bees in Vourvourou (ok that wasn’t fun, but it was exciting), learned flower arranging in Tokyo, found myself in the middle of a riot in Seoul, learned to snowboard in Salzburg, got lost in a labyrinth in Budapest and had my ice cream stolen by a gull in Cornwall. And I’m just getting started. If you’ve enjoyed what you’ve read so far, I’d love you to follow my travelogue - wheresmybackpack.com - and remember, anyone who tries to tell you it’s a small world hasn’t tried to see it all.
View all posts by ailsapm →
This entry was posted in Photography, Travel, United States, Washington and tagged humor, nature, photography, photos, pictures, travel, writing. Bookmark the permalink.