A cathedral that’s not a cathedral

When is a cathedral not a cathedral? When it’s a library. Sterling Memorial Library at Yale, to be exact. This extraordinary structure was completed in 1931 and even though it was always intended to be a library, it was built in the image of a Gothic cathedral.

Walk through the doors and you’re greeted with soaring ceilings, stunning stained glass windows and the most impressive library circulation desk I’ve ever seen.

It’s so bizarre and so decadent, I absolutely adore it. Who wouldn’t want to spend hours cramming for an exam in nooks like this… 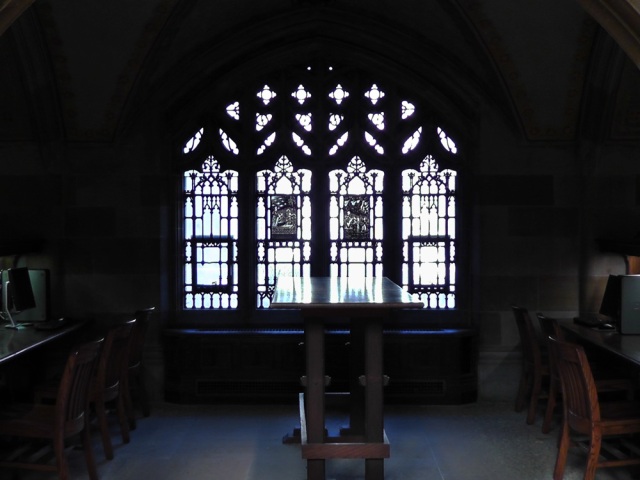 Hi there! I’m Ailsa Prideaux-Mooney. I’ve lived in many places, and travelled to many more. I had a lot of fun getting there and being there, wherever there happened to be at the time. I climbed a castle wall in Czesky Krumlov, abseiled down cliffs to go caving in the west of Ireland, slept on the beach in Paros, got chased by a swarm of bees in Vourvourou (ok that wasn’t fun, but it was exciting), learned flower arranging in Tokyo, found myself in the middle of a riot in Seoul, learned to snowboard in Salzburg, got lost in a labyrinth in Budapest and had my ice cream stolen by a gull in Cornwall. And I’m just getting started. If you’ve enjoyed what you’ve read so far, I’d love you to follow my travelogue - wheresmybackpack.com - and remember, anyone who tries to tell you it’s a small world hasn’t tried to see it all.
View all posts by ailsapm →
This entry was posted in Connecticut, Photography, Travel, United States and tagged architecture, photography, photos, pictures, postaday, travel. Bookmark the permalink.

3 Responses to A cathedral that’s not a cathedral