5 ingredients for a proper Irish Hallowe’en

While St. Patrick’s Day may be touted as the main Irish event of the year in New York, to me, Hallowe’en remains the most Irish of festivals. But the way it is celebrated here is so far removed from the Hallowe’ens of my childhood that it is barely recognisable.

There are parades, which I generally avoid because 1) I can’t stand crowds 2) you never get there early enough so are relegated to watching the backs of people’s heads in front of you whilst being elbowed in the back by people behind you and 3) I’ve never understood the whole concept of standing in a crowd watching another crowd of people move past. Why can’t everyone move? If the crowd that was watching moved in the opposite direction to the crowd being watched, you’d still see everything, but it would all be over a lot quicker and then we could all go home.

There is huge competition to be the best-decorated house in the area – just like at Christmas time but with more black and orange. Don’t get me wrong, we decorate in Ireland too, but usually inside the house with perhaps a demure suggestion of holiday cheer peeking through the windows. Now I have to admit, this outdoor decoration extravaganza is kind of fun, in a trumpet-blowing, jazz-hands, check me out kind of way. I have heard that 78th Street on the Upper East Side is THE place to see Hallowe’en decorations New York City-style, so I shall pop along later today to check them out.

And then there are those Hallowe’en parties where you are required to drop a bundle of cash at the newest pop-up Hallowe’en costume store for an outfit consisting of approximately 4.5 inches of fabric and some fishnet tights; flashing lights and whirly bits optional.

But for a proper old-fashioned Irish Hallowe’en, none of this is necessary. All you need are 5 simple ingredients.

Hallowe’en is not Hallowe’en without a bonfire. It 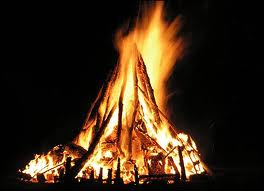 is the heart and soul of this festival, originating from ancient times when all household fires were extinguished, and people would gather at ritual sites to wait for the Druids to light a bonfire – fire of bones. They would then take a burning ember or a brand they lit from the new fire back to their hearth. Some say the bonfires were to ward off evil spirits; others say it was to help spirits find their way. Either way, one thing is certain. If you don’t have a bonfire, you don’t have Hallowe’en – a simple rule of thumb is the bigger and brighter the better. Days of preparation used to go into our bonfires when we were growing up, and all the hard work was worth it when darkness fell on All Hallow’s Eve and the match was struck to light that fire. You’d sit around in the dark, biting cold as the flames lapped higher and higher, until the heat built up so much you had to move back with your cheeks flushed red and the wood smoke would encircle you and scent your hair and clothes for days to come. And as the fire died down there was always the chance to wrap a potato in tin foil and throw it into the embers where it would cook away. You’ve never tasted a better-tasting potato than one freshly dug out from the dying embers of a bonfire.

Yes, fireworks; this is a festival of fire, after all. But none of your fancy, 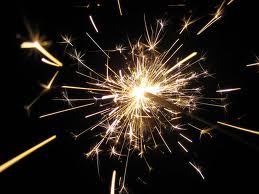 exploding smiley faces and planets like on the 4th of July. No, what you want is the simple joy of a hand-held sparkler. I can still hear the voices of the women on Dublin’s Moore Street coming up to Hallowe’en; their sing-song way of catching your ear with the familiar “5 for 50 the sparklers“. 5 sparklers for 50 pence, I wonder what they cost in Euros nowadays? “5 for a pound the coloured sparklers” – now those were fancy, and not always available, but as far as I was concerned, you couldn’t beat the beauty of a dazzling white sparkler fizzing away in your hand as you stood beside the bonfire and watched it burn and spit until it fizzled itself out of existence. 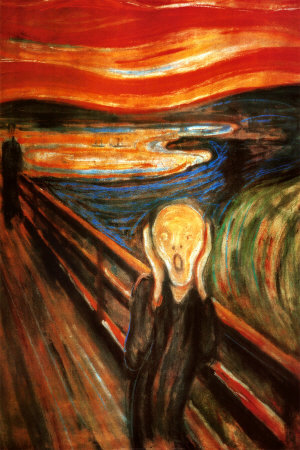 The Irish are a nation of accomplished story tellers, and at no other time of the year does this gift shine so brightly than it does at Hallowe’en. The latest Hollywood ‘shockbuster’ cannot hold a spooky candle to the effect a well-told tale can have on the eager listeners huddled around a bonfire, trembling in the dancing shadows of a cold October night. Here’s how to tell a story like an Irish Seanachaí, shared by the incomparable Eamon Kelly:

The simplest, yet most delicious of meals, consisting primarily of mashed potatoes and lots of chopped curly kale, with generous amounts of butter, whole milk (or better yet, cream – who cares, it’s Hallowe’en) and salt & pepper to taste. It doesn’t need any accompaniment; it is a meal unto itself and to add anything else o

n the plate would detract from the delicious simplicity. The traditional way to serve it is to make a big mound of colcannon, then use a spoon to create a little well in the top into which you drizzle more melted butter. Colcannon is such a part of the Irish psyche there’s even a song about it, titled, appropriately enough… Colcannon. Mary Black does a great cover of it if you want to check it out.

From the Irish ‘Bairín Breac‘ meaning speckled loaf, there is huge controversy over the name of this light and delicious fruited tea bread. Barn or barm? I have always come down on the side of Barnbrack, as it is true to the original Irish; barm may have come from an old English word meaning ‘yeast’, so barmbrack would mean speckled yeast, but there are people who would happily toss me on the bonfire for going with barn instead of barm, so to make life easy most people simpl 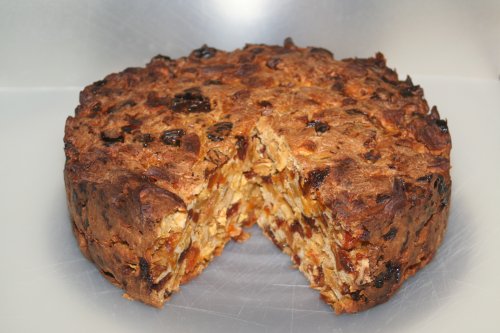 y refer to it as brack. It’s not just your average fruit loaf; it is neither bread nor cake but exists mysteriously in between, and there’s a tradition of baking hidden objects into the brack that carry symbolic meanings. The original items included: a coin (wealth), a rag (poverty), a ring (marriage), a pea (plenty), thimble (spinster), button (bachelor) and a stick (marital discord). Whichever item ended up in your slice of brack predicted your fortune for the year to come.  Nowadays most bracks only include the ring, but just like the bracks in days of old, it is best served with a generous layer of butter and endless cups of tea, and bitten into gingerly to avoid breaking a tooth on a hidden ring.

While each part of Ireland and each family will have their own variations on what else constitutes a proper Hallowe’en, the 5 items above are staples. Give it a try next Hallowe’en and see what you think.

If you have other Hallowe’en traditions, I’d love to hear them.

Quick update: I just got back from a perilous promenade around Manhattan’s Upper East & West sides, posted my spooky shots here.

Hi there! I’m Ailsa Prideaux-Mooney. I’ve lived in many places, and travelled to many more. I had a lot of fun getting there and being there, wherever there happened to be at the time. I climbed a castle wall in Czesky Krumlov, abseiled down cliffs to go caving in the west of Ireland, slept on the beach in Paros, got chased by a swarm of bees in Vourvourou (ok that wasn’t fun, but it was exciting), learned flower arranging in Tokyo, found myself in the middle of a riot in Seoul, learned to snowboard in Salzburg, got lost in a labyrinth in Budapest and had my ice cream stolen by a gull in Cornwall. And I’m just getting started. If you’ve enjoyed what you’ve read so far, I’d love you to follow my travelogue - wheresmybackpack.com - and remember, anyone who tries to tell you it’s a small world hasn’t tried to see it all.
View all posts by ailsapm →
This entry was posted in Ireland, Travel and tagged halloween, humor, ireland, irish, photography, photos, pictures, postaweek2011, writing. Bookmark the permalink.

4 Responses to 5 ingredients for a proper Irish Hallowe’en