The idea of mischievous courting couples getting risqué on joggling boards in Charleston got me rooting through my travel shots for other mischievous photos, starting with this outdoor privvy in NYC, just across the street from the Chelsea Hotel.

Wandering around Snug Harbor Botanic Gardens on Staten Island, I spotted this stealthy squirrel, definitely up to no good.

Maximón is a rather unusual deity venerated by many villagers throughout Guatemala. Part pre-Columbian Mayan (possibly a reincarnation of the Mayan god Mam), part Christian (St. Simon) and one hundred percent scoundrel, this is a god that drinks and smokes and gets up to all kinds of mischief. I visited a Maximón shrine tucked away in the back streets of Santiago Atitlán but he was in evidence everywhere. There were shelves full of mini-Maximóns for sale in Antiguan stores, dark little figures with gaping mouths waiting to receive a lit cigarette as an offering.

High up on Hurricane Ridge in the heart of the Olympic Mountains, this feisty deer got right up in my face demanding a piece of my sandwich. I couldn’t in good conscience give her any, because she was wild, although clearly acclimatized to humans – bad tourists! – but as I was attempting to dissuade her from her mission to de-sandwich me, a raven stole the other half of my lunch – a bowl of tomato soup – leaving a great red soupy streak across the snowy slopes. I’m convinced the two of them were working as a team. 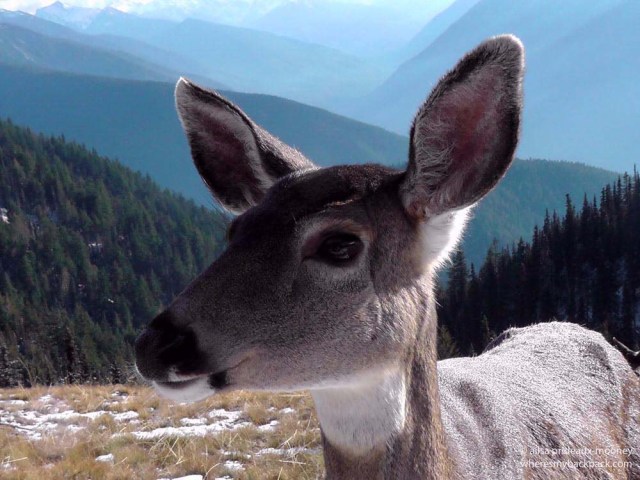 How mischievous are you feeling right now?  If you would like to join in this week’s travel theme (everyone’s welcome!) here’s what to do:

I hate the actor and audience business. An author should be in among the crowd, kicking their shins or cheering them on to some mischief or merriment. – D.H. Lawrence

Neverland is the way I would like real life to be… timeless, free, mischievous, filled with gaiety, tenderness and magic. – Mary Martin