Ahh, the heady days of summer have descended upon Seattle and with them comes an air of exuberance that lightens the step and broadens smiles all over town. This is a glorious part of the world to experience in the summertime, and there’s no better evening treat than to sit outdoors as night falls; a warm breeze washing over you as you get ready to watch a film on an outdoor screen. There are outdoor screens all over Seattle, but if you’re going to settle in for a night at the movies, why not do it in the company of two of the biggest stars ever to grace the Silver Screen?

Fremont Outdoor Movies takes place in a parking lot at the corner of North 35th Street and Phinney Avenue North, and the screen is a mural that was custom painted for Fremont Studios, with giant likenesses of Humphrey Bogart and Ingrid Bergman flanking the screen. 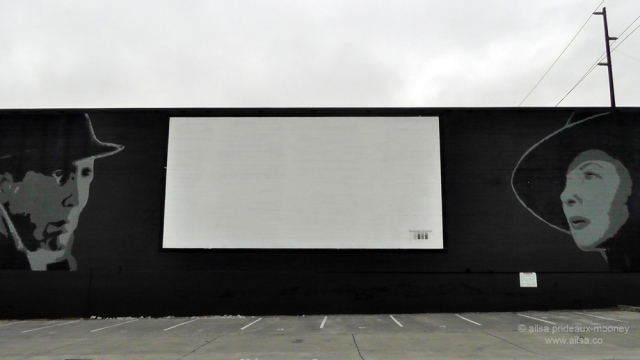 The murals are so dramatic it’s easy to forget about the film you’re watching and instead find yourself remembering your favourite scenes from Casablanca. Oh, that goodbye scene gets me every time. “We’ll always have Paris” and of course, “Here’s looking at you, kid.” What’s your favourite part?

Hi there! I’m Ailsa Prideaux-Mooney. I’ve lived in many places, and travelled to many more. I had a lot of fun getting there and being there, wherever there happened to be at the time. I climbed a castle wall in Czesky Krumlov, abseiled down cliffs to go caving in the west of Ireland, slept on the beach in Paros, got chased by a swarm of bees in Vourvourou (ok that wasn’t fun, but it was exciting), learned flower arranging in Tokyo, found myself in the middle of a riot in Seoul, learned to snowboard in Salzburg, got lost in a labyrinth in Budapest and had my ice cream stolen by a gull in Cornwall. And I’m just getting started. If you’ve enjoyed what you’ve read so far, I’d love you to follow my travelogue - wheresmybackpack.com - and remember, anyone who tries to tell you it’s a small world hasn’t tried to see it all.
View all posts by ailsapm →
This entry was posted in Photography, Travel, United States, Washington and tagged art, movies, photography, photos, pictures, travel, writing. Bookmark the permalink.

24 Responses to We’ll always have Paris