If you’re in the West Seattle neighbourhood with some time on your hands, go in search of the West Seattle Murals, commissioned in 1989 to capture some major moments in the neighbourhood’s history. There are eleven murals in total; most of them clustered around The Junction at the intersection of California and Alaska. I went for a wander around the area earlier this week and got a few photos of them; some of them around the backs of buildings, on the sides of banks and post offices; some of them partially obscured by rubbish bins, foliage and parking lots full of cars. The search made for a fun afternoon and I got to know a little bit more about West Seattle’s history along the way.

Mural #1: West Seattle Ferries, showing two early steam-powered ferries that ran between downtown Seattle and West Seattle, a cable car that connected the ferries to the centre of town and on the right, the Luna Park amusement park of yore. The park ran from 1907 to 1913 and was designed by Charles Looff, the same chap who carved Coney Island‘s very first carousel. In fact, the name Luna Park was a nod to the Luna Park in Coney Island. 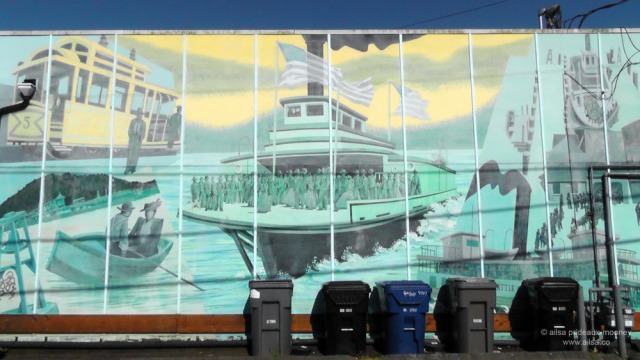 Mural #2: The Junction, depicting one of two streetcar lines that connected at the intersection of California and Alaska. It was this junction that gave the intersection the nickname ‘The Junction” which is still used today, even though the last cable car stopped running in 1940.

Mural #3: Midnight Call; an action-packed mural of the old Junction fire/police station and a horse-drawn fire rig responding to a midnight call. 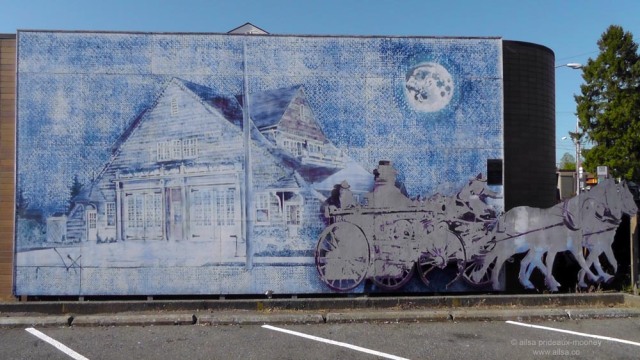 Mural #4: Mosquito Fleet Landing; passengers disembarking the Clan McDonald steamer which was part of Puget Sound’s Mosquito Fleet. The fleet consisted of thousands of steamboats that sailed from port to port along the west coast; so numerous that they resembled a swarm of mosquitoes on the surface of a pond. 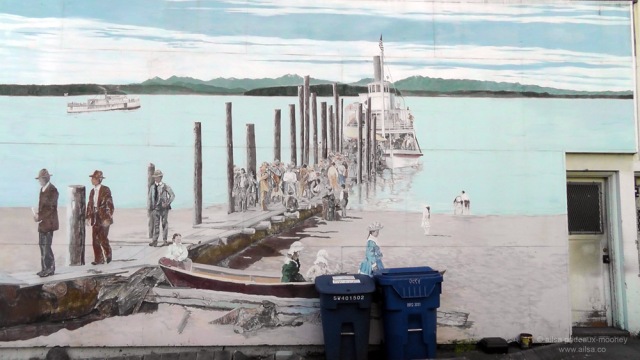 Mural #5: The First Duwamish Bridge; showing the very first bridge to span the Duwamish River, connecting West Seattle to the then separate City of Seattle. It was across this bridge that early Seattleites would travel in search of amusement at Luna Park. 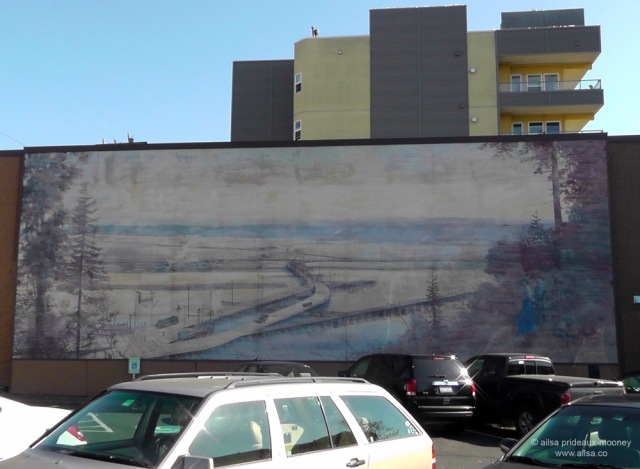 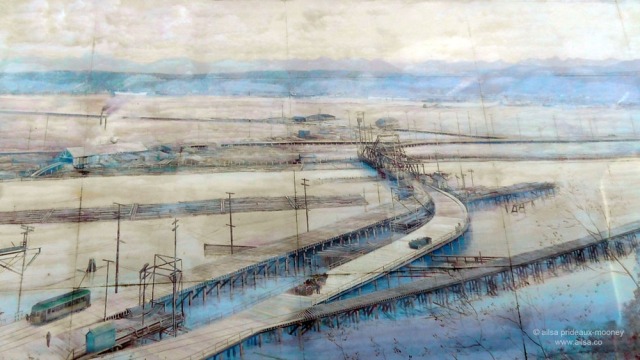 Mural #6: Morgan Street Market; the market opened in 1924 and billed itself as a one-stop shopping centre. How very modern!

Mural #7: Alki in the Twenties; this was painted from a photograph showing a panoramic view of Puget Sound and the Olympic Mountains. Look closely and you’ll see the Mosquito Fleet dock and a trusty steamboat making its way across the water.

Mural #8: Tuesday’s Bank Day, depicting thrift education in the twenties which was aimed at inculcating in kiddies the habits of thriftiness and saving money. It promoted responsible consumerism during the flapper era; judging by the reckless consumerism that followed and still persists today, I’d give thrift education a zero in efficacy. Appropriately enough, this mural is located on the side of a Chase bank. 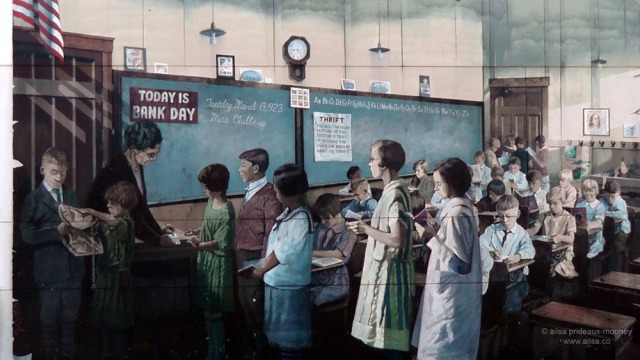 Mural #9: The Hi-Yu Parade; Hi-Yu is a West Seattle non-profit that was founded in 1934 and is still going strong today, organizing an annual festival and parade. Hi-Yu means ‘plenty, much, abundance’ in the Chinook language.

Mural #10: The Old Mud Hole. Today, West Seattle’s Lincoln Park has a heated, saltwater pool called Colman Pool , but it began life in 1929 as a tide-filled swimming hold lovingly referred to as The Old Mud Hole, which the fire department would hose out periodically to clear accumulated mud and debris. 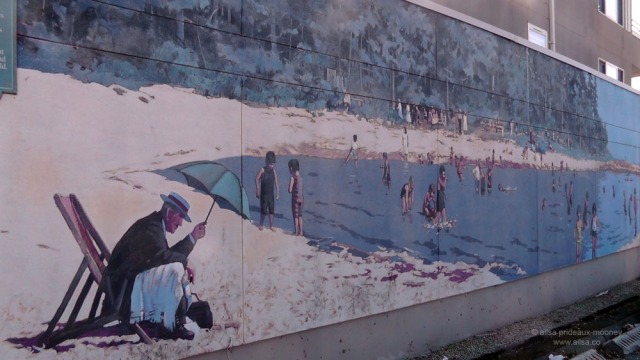 Mural #11: Press Day; which shows the frenzy of press day at the West Seattle Herald pre-WW2, complete with web-fed Duplex press and typesetting done by hand.

These eleven murals are just the tip of the iceberg. It would appear that mural fever has hit Seattle and soon, blank walls may become a fleeting memory. Every day I discover a new and wonderful mural lurking around a corner, down an alley, in the most unexpected of places. Don’t you just love public art?

Hi there! I’m Ailsa Prideaux-Mooney. I’ve lived in many places, and travelled to many more. I had a lot of fun getting there and being there, wherever there happened to be at the time. I climbed a castle wall in Czesky Krumlov, abseiled down cliffs to go caving in the west of Ireland, slept on the beach in Paros, got chased by a swarm of bees in Vourvourou (ok that wasn’t fun, but it was exciting), learned flower arranging in Tokyo, found myself in the middle of a riot in Seoul, learned to snowboard in Salzburg, got lost in a labyrinth in Budapest and had my ice cream stolen by a gull in Cornwall. And I’m just getting started. If you’ve enjoyed what you’ve read so far, I’d love you to follow my travelogue - wheresmybackpack.com - and remember, anyone who tries to tell you it’s a small world hasn’t tried to see it all.
View all posts by ailsapm →
This entry was posted in Photography, Travel, Washington and tagged art, photography, photos, pictures, travel, writing. Bookmark the permalink.