The last day of our road trip dawned bright and sunny. We woke early, anxious to make the most of our final morning on the road. After a leisurely breakfast Jill set about climbing the dune that backed onto our camp site. I stayed behind at our little picnic table, sipping coffee and finishing the last chapter of the book that had accompanied me all along the journey. It was with a heavy heart that I read the last few pages of Steinbeck’s trail around America, not because he was finished with his exploration of this extraordinary land, but because my own adventures were drawing to a close too.

When I’d finished, I set the book upon the picnic table and watched a daring bird eye the remains of our breakfast, swooping down from a nearby tree at intervals when it appeared I wasn’t looking, swiping a few stray crumbs.

It was the most delightful way to spend a morning. Jill came back and together we packed up the camp site.  As we were taking down the tent, Jill tripped over one of the ropes and it tore off, leaving the tent lurching precariously to one side. That was the second tent in as many days that we’d managed to destroy. We bundled everything into the back of the pickup and set off north along the coast. Today we were going to stick to the shoreline as long as we could, only turning inland when it got dark. 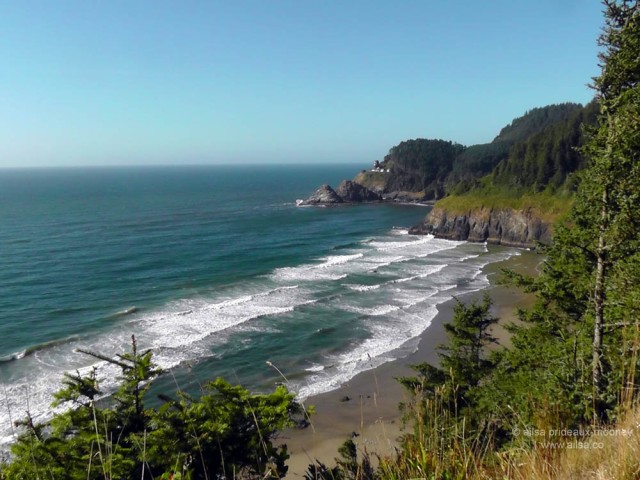 The Oregon Dunes are quite spectacular to behold, rising to heights of 500 feet and trailing along the coast for about 40 miles. They are the largest expanse of coastal sand dunes in the entire United States and at points spread over two and a half miles inland. These shape-shifting giants engulf entire forests, leaving just the tree tops peeping out above the dune crests. 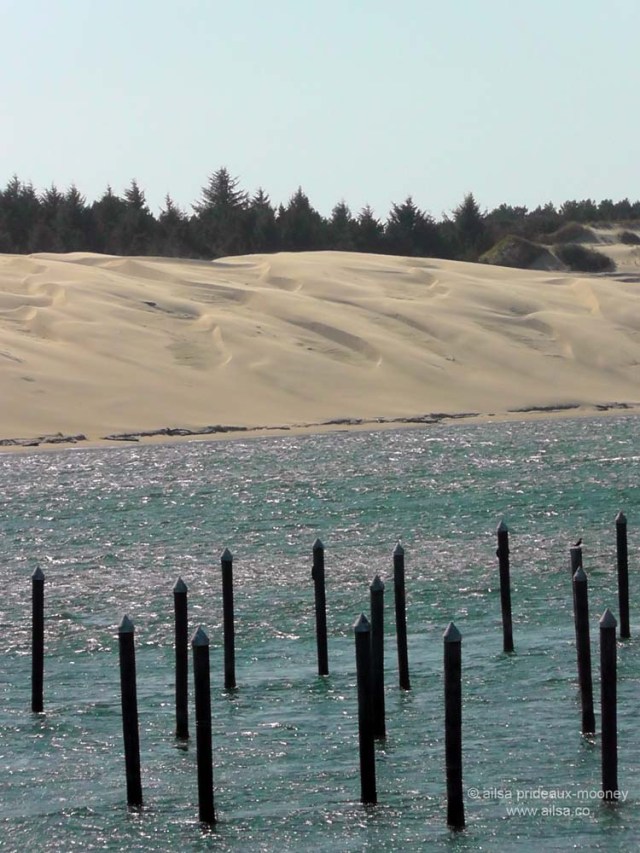 We took our time along this glorious stretch of coast; we were in no rush because we didn’t have to find a place to stay tonight. Instead, we pulled over again and again to admire exquisite vistas and walk along unforgettable beaches. 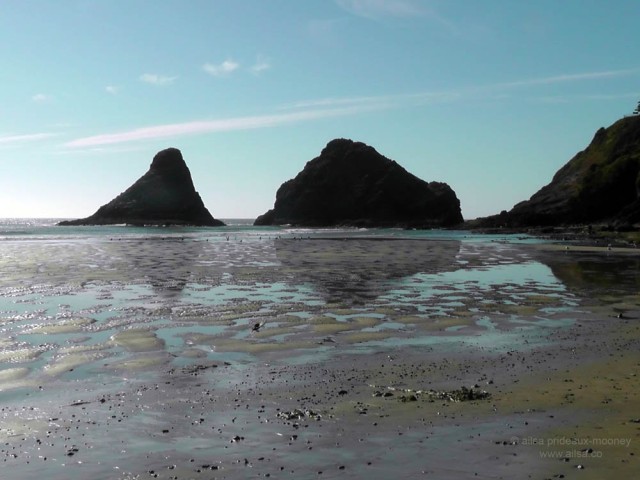 Tiny towns slipped by as we drove north, weaving along the coast road. I was on the wrong side of the car to photograph the sea views whipping by as we drove, but there was such beauty to be seen on the other side of the road it didn’t matter. The coastal highway was lined by towering sandy cliffs topped with just a suggestion of greenery.

Every so often the sand would dip down low and a squat grove of wind-sculpted trees would flash bright green against the pale blue of the skies. 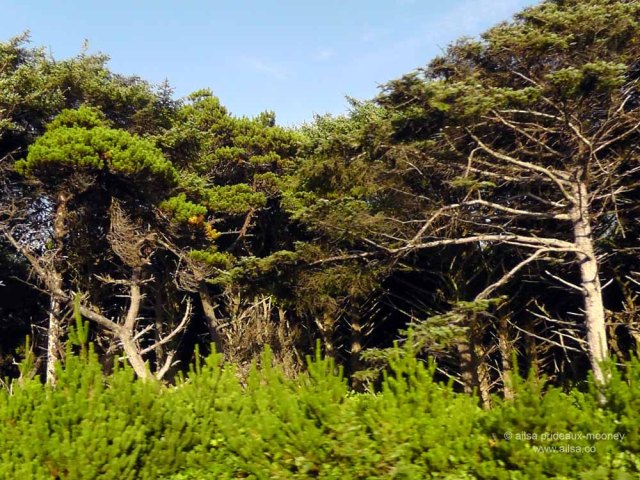 We lost track of the time, driving with the windows down and the radio cranked high, sun in our faces, salt air in our hair and the faintest perfume of wildflowers pervading the cab of the pickup as we drove through sleepy little towns. It was in one such sleepy little town we saw another of those fake police cars; a uniformed mannequin staring sightlessly at passing traffic. Jill glanced over at me, inquiringly. “I wonder what the speed limit is here. Have you seen a sign recently?” I hadn’t noticed a sign for ages, but was going to mention that other cars had overtaken us going considerably faster. Before I could answer, however, lights started flashing. I could almost still see the question mark at the end of Jill’s question floating before me as the siren began to sound.

“Umm, no, I haven’t” I replied. “Maybe the nice policeman behind us will be able to help.” We pulled over and waited. Jill’s eyes suddenly grew wide and she leaned over to remind me that when we had left on our road trip, we had taken the insurance card for the wrong car with us. Her husband had texted us to let us know our mistake, and had kindly taken a photo of the correct insurance card and emailed it to us. Jill started fumbling with her phone trying to find the email as the cop started his long, slow, important walk from his car to ours.

“Hello officer” we smiled up at him. The face gazing back was a study in immovability. “License and insurance” he demanded. “Well you see, officer…” Jill produced her phone and she giggled nervously. Then I giggled nervously. The officer didn’t giggle, nervously or otherwise. He just wrote a giant ticket, got back in his car and drove back towards the sleepy little town, in search of more tourists to ticket. Or a doughnut.

We drove on, subdued, for a couple of miles, pulling over when we saw a swanky ocean-side restaurant. A slap up dinner at a posh restaurant seemed to be in order. We snuggled into plush velvet chairs and ordered up a banquet. Then Jill got on the phone to her husband to break the news about her ticket and I slipped out to the patio to watch the sun set over the ocean. 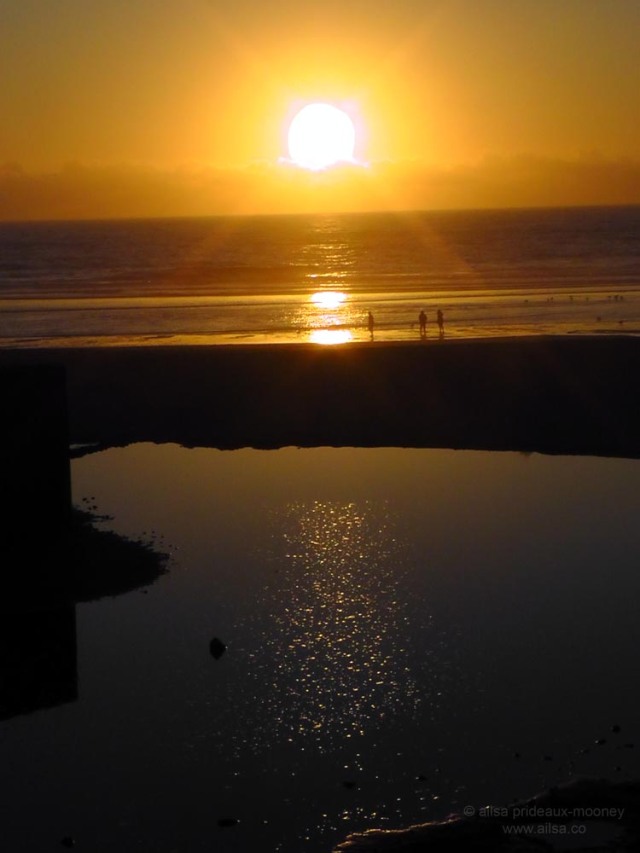 Jill joined me on the patio and together we watched the sun’s final burst of colour before settling in for a long, slow, sumptuous meal accompanied by reminiscences of our epic journey. 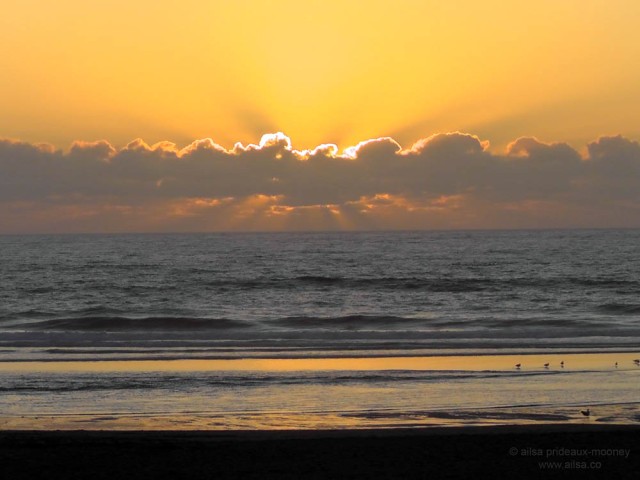 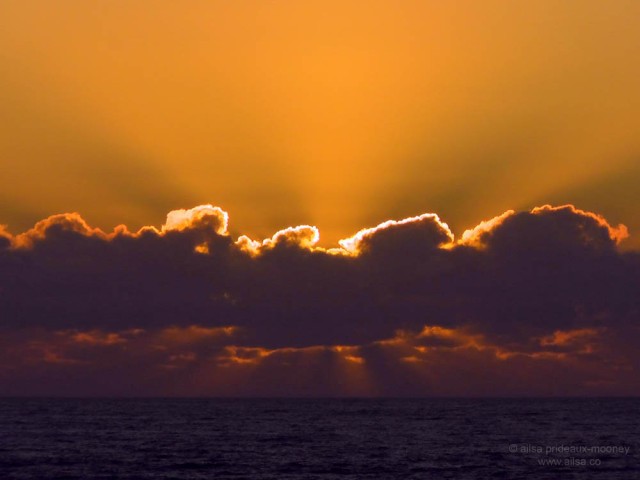 After dinner we took the next slip road from the coast to the freeway and drove I-5 back to Seattle in darkness; the tinkle of the radio and the twinkle of city lights keeping us company along the way. Tomorrow would be a return to life as usual, whatever that would entail, but for now, the memory of that last sunset warmed our memories with one last glowing adventure.

Here’s a quick peek of our journey today:

Hi there! I’m Ailsa Prideaux-Mooney. I’ve lived in many places, and travelled to many more. I had a lot of fun getting there and being there, wherever there happened to be at the time. I climbed a castle wall in Czesky Krumlov, abseiled down cliffs to go caving in the west of Ireland, slept on the beach in Paros, got chased by a swarm of bees in Vourvourou (ok that wasn’t fun, but it was exciting), learned flower arranging in Tokyo, found myself in the middle of a riot in Seoul, learned to snowboard in Salzburg, got lost in a labyrinth in Budapest and had my ice cream stolen by a gull in Cornwall. And I’m just getting started. If you’ve enjoyed what you’ve read so far, I’d love you to follow my travelogue - wheresmybackpack.com - and remember, anyone who tries to tell you it’s a small world hasn’t tried to see it all.
View all posts by ailsapm →
This entry was posted in Oregon, Photography, Travel, United States, Washington and tagged humor, nature, photography, photos, pictures, travel, writing. Bookmark the permalink.