The time for preparation was over; we were beginning our road trip today. I think both of us were relieved to finally be getting on the road, because the days leading up to the trip had been loaded with tension and unspoken frustrations. I fervently hoped that the open road would wash away all our troubles and we would immerse ourselves in the adventure ahead. Jill’s husband had started loading things into their little pickup by the time I made it to my first cup of coffee. Jill always has the tastiest coffee on hand; the enticing aroma practically drags you out of bed and pours itself into a huge steaming mug. As I sipped the rich dark brew, I started going over the first couple of days of our trip in my head. The first night was all sorted; we were staying at a motel in Twin Falls, but the second night was still undecided. We were going to be camping in Moab but hadn’t settled on a camp site. Online research had thrown up a couple of possibilities, and the one we had called had told us there was no need for a reservation. The site, just outside of Arches National Park, was listed as a ‘dry’ site, meaning no water, no showers and no toilet. I shuddered inwardly, questioning the wisdom of staying on a self-professed ‘dry’ site in the middle of the Utah desert in summer. Visions of Jill and myself staggering across endless expanses of sand dunes, chasing mirages of oases and ultimately dying of dehydration, started to form in my imagination. I shoved some sunscreen, SPF several thousand, into my canvas bag, hoping it would be strong enough to protect my whiter-than-white skin from burning should I crumple in a heap in the middle of a desert, miles from water. “Save yourself” I would croak, bravely, spitting dust from the desert floor.

“You’ll be fine” Jill’s husband reassured me as he grabbed another box of camping gear to stuff in the truck. “Just watch out for scorpions.” Coffee shot out my nose, but I cunningly distracted attention from it by inhaling at the same time and choking. Jill ambled calmly to my side. “There won’t be any scorpions” she said, meeting my gaze steadily, handing me a napkin to wipe my face and giving her husband a dig in the ribs. He headed off to work and left us to get on with things.

I tried to help with the packing but was shooed away. There was some serious organization going on in the back of the pickup, with boxes and bags and sacks of mysterious stuff being strapped down. “Please let me help.” I pleaded, acutely aware that I was beginning to sound like a whiny brat, but unable to help myself. I was feeling left out and useless. Jill suggested I reorganize the plastic tubs containing our food, so I shuffled the groceries around in the boxes to make sure they wouldn’t topple over, filled coolers with ice for the perishable items and separated out a little pile of granola bars, chips and sandwiches for us to take in the cab with us. As Jill was stuffing the last of the boxes into the back of the truck, I flipped open my laptop and did an internet search on scorpions in Utah. The first web site I happened upon helpfully informed me there were over 30 species of scorpions in the Southwest. On the bright side, only one was considered life-threatening. My mouth felt suddenly dry so I took another swig of coffee. It continued “At night they prowl the desert floor.” Excellent. The desert floor, as in the ground we would be sleeping on. In a tent. I wondered how much protection a tiny layer of canvas would offer us when hordes of prowling scorpions of the life-threatening variety descended upon our camp site as we slept. I scanned the web page for anything else of note and my eye landed upon another rather alarming word. Rattlesnakes. I switched off my laptop. We were going to die.

We bid a fond farewell to the furry residents of the household. Jill and her husband share their home with two fabulous dogs and the coolest cat I’ve ever met. Rufus is a cattle dog mix who longs to be an alpha dog but just can’t quite pull it off. I love him dearly and he thinks I’m insane and loves me all the more for it. Whisper is cattle dog through and through and is both blind and deaf, but despite all her challenges, she can still kick Rufus’ butt. She is a bad ass. Reigning loftily above everyone else in the house is Webster, a giant feline explosion of creamy white fur who takes everything in his stride. He emanates cool.

But they were staying behind to keep Jill’s husband company as we tootled around the country on our road trip. So we got in the cab of the pickup and set off, stopping to pick up more coffee to go before crossing the West Seattle Bridge and turning north onto I-5. Then we peeled off onto I-90 and were truly on our way. The Cascades loomed familiarly and lushly green through the windshield as I-90 carved a channel through the mountains towards Snoqualmie Pass.

Deep in the heart of the Cascades, we skirted the shores of Keechelus Lake, sunlight creating a swirl of sparkles that danced on the turquoise waters. This is the source of the Yakima River and although it is a natural lake, its capacity is controlled by a man made dam. Burbot, Kokanee and the ominously named Cutthroat trout swim these waters, but native American Indians weren’t too impressed with fishing prospects on this lake, because the name they gave it, Keechelus, translates roughly as ‘few fish‘. They apparently favoured another lake nearby, because they named it Kachess, meaning ‘more fish‘. 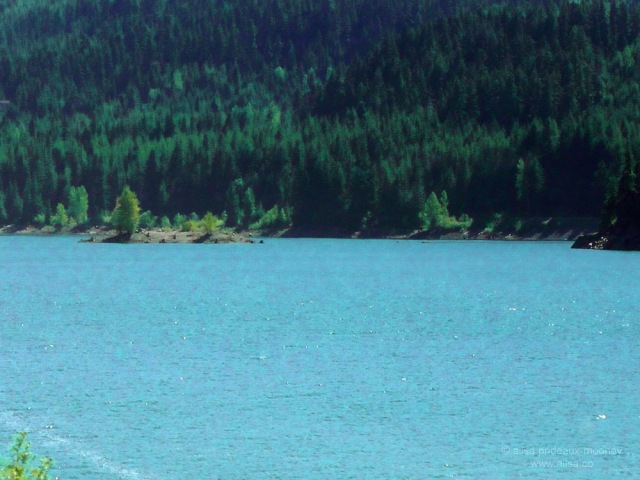 We popped over the pass into Eastern Washington and the colours changed from the dark green of pine to the silvery green of sage brush. The dramatic change in landscapes never fails to thrill me along this stretch of highway. At Ellensburg we left I-90 and turned south onto I-82 which winds through Yakima Valley. I had never been on this stretch of road before, so I pushed my nose up against the window as Jill drove and watched the cultivated land of this most fertile of valleys as it whizzed by. Orchards of sturdy trees, dripping with apples, lined the roadsides and vineyards created symmetrical patterns that spread out to the horizon. 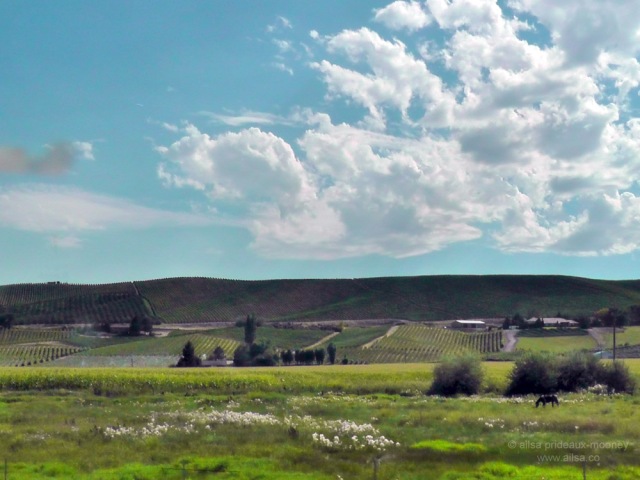 Yakima Valley is one of the best apple-producing areas in the world. It is also a flourishing wine region and almost 75% of all US-grown hops are produced right here, all of it irrigated by the mighty Yakima River, which begins its journey back in Keechelus Lake and runs all the way to the Columbia River.

I checked in with Jill to see if she wanted me to take over the driving, but she was quite happy behind the wheel. She confessed to me that it was keeping her going; it gave her a goal. I knew what she meant. I could lose myself by taking photos and video of the passing scenery, but if I were driving, Jill would find herself dwelling on life and she didn’t want to do that. We both needed a way to escape. We switched on the radio, tuned into a local station and rocked out to classic tunes from Pink Floyd, AC/DC and Van Halen. It proved to be an effective way to burn off unwanted angst. Outside the windows, the hills were dazzling, changing from ruffled khaki to camouflage to burnt caramel as the day drew on. 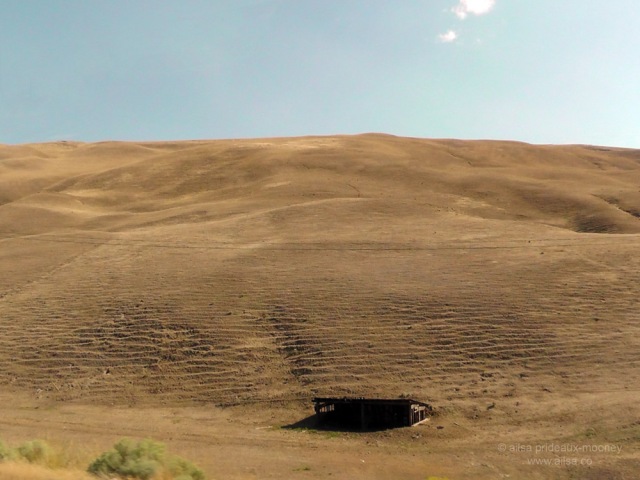 The sun began to sink towards the horizon and we crossed the Yakima River into the northeast corner of Oregon and switched onto I-84 southbound. Off in the distance I could see some dramatic mountains glowing blue in the evening light. “Do you know the name of those blue mountains?” I asked Jill, my nose still pushed up against the passenger side window. “The Blue Mountains” she answered and we dissolved into laughter. 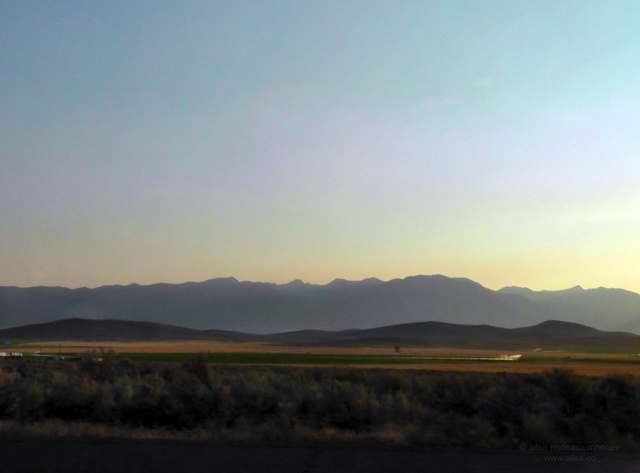 Over the border into Idaho and through the night we drove, making a quick pit stop near Boise to refuel and devour the sandwiches and potato chips we had packed in the cab. It was somewhere close to midnight when we reached the motel in Twin Falls and discovered to our delight that their pool area was open around the clock, so we soaked in the hot tub for a while before turning in for the night. I was thankful for the soft bed and warm blankets and settled in for what I was convinced would be the last peaceful night’s sleep I was going to have for quite some time.

Here’s a quick glimpse of today’s trip, shot shaky cam from the pickup – if you’ve never seen the Blue Mountains, check them out here, they’re rather lovely:

Hi there! I’m Ailsa Prideaux-Mooney. I’ve lived in many places, and travelled to many more. I had a lot of fun getting there and being there, wherever there happened to be at the time. I climbed a castle wall in Czesky Krumlov, abseiled down cliffs to go caving in the west of Ireland, slept on the beach in Paros, got chased by a swarm of bees in Vourvourou (ok that wasn’t fun, but it was exciting), learned flower arranging in Tokyo, found myself in the middle of a riot in Seoul, learned to snowboard in Salzburg, got lost in a labyrinth in Budapest and had my ice cream stolen by a gull in Cornwall. And I’m just getting started. If you’ve enjoyed what you’ve read so far, I’d love you to follow my travelogue - wheresmybackpack.com - and remember, anyone who tries to tell you it’s a small world hasn’t tried to see it all.
View all posts by ailsapm →
This entry was posted in Idaho, Oregon, Photography, Travel, United States, Washington and tagged humor, photography, photos, pictures, postaday, travel, writing. Bookmark the permalink.