Despite being desperately tired from our previous day’s drive, we rose early to the sound of a rooster crowing and the enticing aroma of coffee. My friend’s mother had prepared a sumptuous breakfast which we ate leisurely outdoors in the cool of the morning and the shade of an apple tree.

I learned that it had been hot and dry here all summer, and that this part of Wisconsin was in the throes of a very serious drought. Our next two days on the farm were spent ambling through the surrounding countryside, which bore evidence of the desolate effect a drought can have. We wandered through fields of stunted and failing crops, and found vast swathes of cracked mud where once were ponds. Disconsolate frogs and dragonflies gathered around the small patches of wet mud that survived, and snail shells by the hundreds were the only traces of the vibrant ecosystems that had been decimated by the arid conditions.

Sprocket cast off his city ways and embraced life on the farm. He proved adept at finding the few muddy patches that remained, emerging proudly from his latest find caked in thick dark wet earth with a satisfied gleam in his eye. In cleaner moments, he frolicked with his farm dog cousin Paddy in flower-strewn meadows and happily posed for the occasional photo. 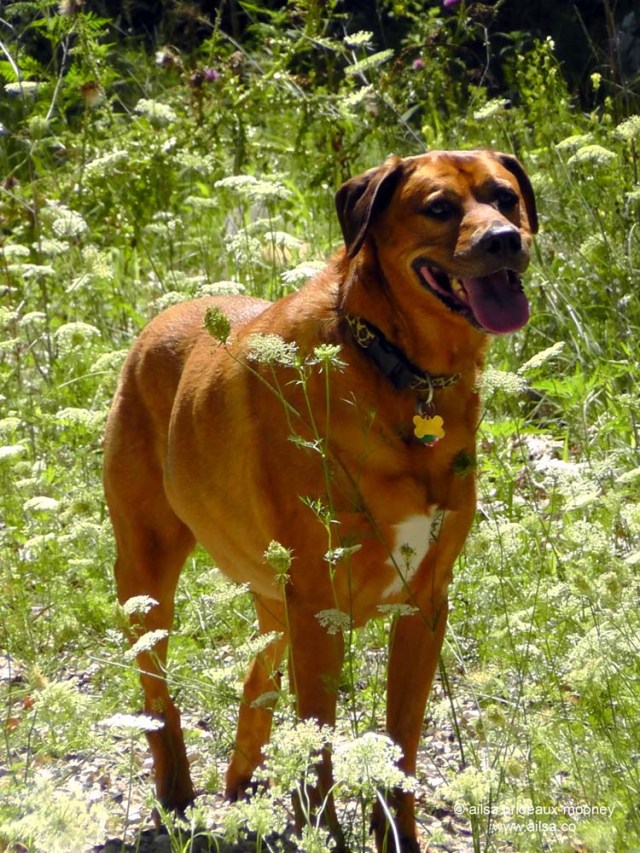 For all of Sprocket’s country gamboling, however, there remained a fascinating gulf between him and Paddy. Paddy was a farm dog through and through and I swear if he were human, he would wear dungarees and chew tobacco. Next to him, even when caked in mud, Sprocket had an air of refinement and, I fancy, of erudition. You could have a conversation with Sprocket and feel like you were both getting something out of it. Paddy just wanted me to throw a ball. So I did exactly that and we were both happy.

Further afield we found forest and all manner of woodland creatures peering out through chinks in the thick of the trees. Most were too quick for my lens, although I did manage to capture a quick photo of one cheeky little onlooker who believed himself hidden from sight. I didn’t want to shatter his illusions but Paddy caught his scent and gave the game away. We bid a hasty retreat to let the little fellow forget our intrusion and resume his bucolic existence. 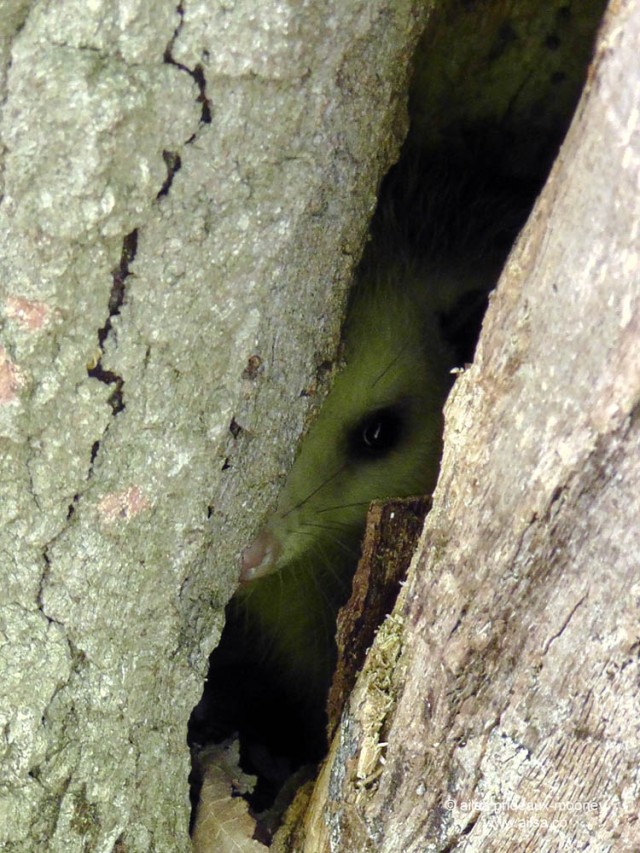 My friend decided to show me around, so we took a drive and I was surprised to discover we had landed in the little township of Erin, with street names such as Donegal Road and O’Connell Street bearing witness to the Irish immigrants who had settled here. There was a long, winding lane rumoured to be haunted by a beast that chased cars off the road in the dead of night. We drove it in the daylight and thankfully had no such encounter, although my friend swore she had narrowly escaped the wrath of the beast several years before.

High up on a tree-covered hill, the spires of a church beckoned parishioners to their devotions. Aptly named Holy Hill, it is home to an order of Carmelites, or more specifically, Discalced or Barefoot Carmelites, so called because they wear sandals which were  traditionally the footwear of the poor. We spied quite a few sandal-shod friars as we explored the grounds and climbed the tower to take in the view. The church interior was intriguing; almost all of it paying homage to Mary, with only one small alcove off to the side reserved for a statue of Jesus. I picked up a leaflet which told of a group of European hermits who settled on Mount Carmel in Israel in the thirteenth century and built a chapel dedicated to Mary. I don’t know enough about the Carmelite order to understand the significance of their choice to dedicate to Mary, but I admire the nod to girl power.

On the way back to the farm, we stopped by Wisconsin’s Automotive Museum and happened upon a chap who was readying one of Wisconsin’s vintage cars, the Kissel, for a vintage car rally. It was quite a treat to get up close and personal with such a rare beauty – there are only 150 ‘Kissel Kars’ known to exist today.

Back at the farm, my friend managed to catch up with her school pals who eagerly filled her in on all the gossip from the reunion she had so narrowly missed. Meanwhile, her dad busied himself by repacking the car, miraculously managing to fit all of our belongings plus Sprocket’s crate inside the back of the car, rearranging things so that I could sit up front. I bravely hid my disappointment at leaving my spot in the back seat. It was the best feeling in the world to have Sprocket sprawled out with his head snuggled into me, but he would need to get used to being in the back seat alone at some point if my friend ever needed to drive somewhere alone with him. Tomorrow we would brave the roads around Chicago and make our way further east. For now, we settled in to enjoy our last few hours of life on the farm.

Hi there! I’m Ailsa Prideaux-Mooney. I’ve lived in many places, and travelled to many more. I had a lot of fun getting there and being there, wherever there happened to be at the time. I climbed a castle wall in Czesky Krumlov, abseiled down cliffs to go caving in the west of Ireland, slept on the beach in Paros, got chased by a swarm of bees in Vourvourou (ok that wasn’t fun, but it was exciting), learned flower arranging in Tokyo, found myself in the middle of a riot in Seoul, learned to snowboard in Salzburg, got lost in a labyrinth in Budapest and had my ice cream stolen by a gull in Cornwall. And I’m just getting started. If you’ve enjoyed what you’ve read so far, I’d love you to follow my travelogue - wheresmybackpack.com - and remember, anyone who tries to tell you it’s a small world hasn’t tried to see it all.
View all posts by ailsapm →
This entry was posted in Photography, Travel, United States, wisconsin and tagged history, humor, nature, photography, photos, travel, writing. Bookmark the permalink.