The shortest distance between two points may be a straight line – or a line segment if you’re a mathematician – but curves are often more interesting. We did a recent travel theme on Leading Lines, and I’ve been staring at the leading lines of Interstate Highways for the last three weeks on my road trip across America, so here are a few curves to shake things up.

Croton Dam in New York state was an unexpected surprise which I happened upon last June. I had only seen it from the base of the structure, but when I paid a second visit to it just before leaving New York, I walked along the bridge at the top of the dam. The reservoir was smooth as glass and filled to the brim with water, which was tipping over the spillway and tumbling down the stone tiers in a blaze of white.

During a visit to Washington DC I visited the US Botanic Gardens. Tucked away in the corner of the conservatory lay a little terrarium, bursting with greenery and reflecting the towering conservatory windows. 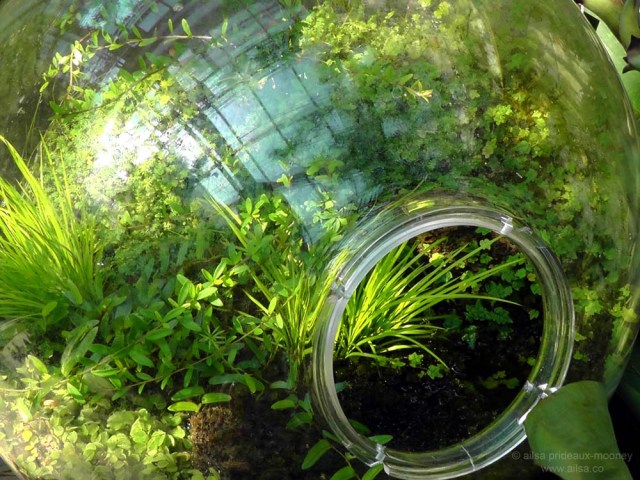 Driving through the Badlands, surrounded by huge outcrops of shaggy, ragged, tattered rocks, I spied a solitary hill along the highway, flaunting its perfect curves.

Are you ready to show off your curves? If you would like to join in this week’s travel theme, create your own post titled Travel Theme: Curves and put a link to this page in your post so others can find it. Check back in next Friday for a new weekly travel theme.

Throw me a curve ball!

Hi there! I’m Ailsa Prideaux-Mooney. I’ve lived in many places, and travelled to many more. I had a lot of fun getting there and being there, wherever there happened to be at the time. I climbed a castle wall in Czesky Krumlov, abseiled down cliffs to go caving in the west of Ireland, slept on the beach in Paros, got chased by a swarm of bees in Vourvourou (ok that wasn’t fun, but it was exciting), learned flower arranging in Tokyo, found myself in the middle of a riot in Seoul, learned to snowboard in Salzburg, got lost in a labyrinth in Budapest and had my ice cream stolen by a gull in Cornwall. And I’m just getting started. If you’ve enjoyed what you’ve read so far, I’d love you to follow my travelogue - wheresmybackpack.com - and remember, anyone who tries to tell you it’s a small world hasn’t tried to see it all.
View all posts by ailsapm →
This entry was posted in Photography, Travel, United States, Weekly Travel Themes and tagged photography, photos, pictures, postaday, travel, writing. Bookmark the permalink.