I got up this morning and was greeted with a loaf of bread that had sprouted strange new life forms. What is up with bread in America? It never goes stale, it goes mouldy…at an alarming rate. As I stood in front of the now floriferous loaf, I pondered the conundrum and came to the conclusion that it’s because Americans insist on putting bucket loads of sugar into their breads, and if not sugar, then honey, molasses or other sweetening agents that have no business making their home in a loaf of bread. Cakes, yes. Bread, no. No matter how much time I spend in the States, I cannot avoid a ‘yeuch’ moment when I bite into something that is supposed to be savoury and taste sweetness.

As I boiled the water for coffee, I thought about the misconception many Americans have that Irish soda bread is slightly sweet with raisins in it. Don’t get me wrong – we have nothing against raisins, but when we put them in dough we call the end result cakes, raisin bread or tea loaves – not soda bread. The bakery just down the street proudly sells a raisin and caraway seed loaf masquerading as Irish soda bread. I rail inwardly every time I pass by.

With the coffee brewing, I figured I’d have enough time to pop downstairs and pick up a new loaf, but I stopped halfway out the door. Why bother? It’ll be as disappointingly sugary as the last loaf, and mouldy by tomorrow. Why not make my own soda bread instead? It’s ridiculously easy and incredibly quick to make. I checked the cupboards and found, to my delight, I had everything I needed to make proper Irish soda bread.

45 minutes later I sat down to a breakfast of freshly baked soda bread, plum and ginger jam and a second pot of coffee. I may never buy another loaf of bread in the States. 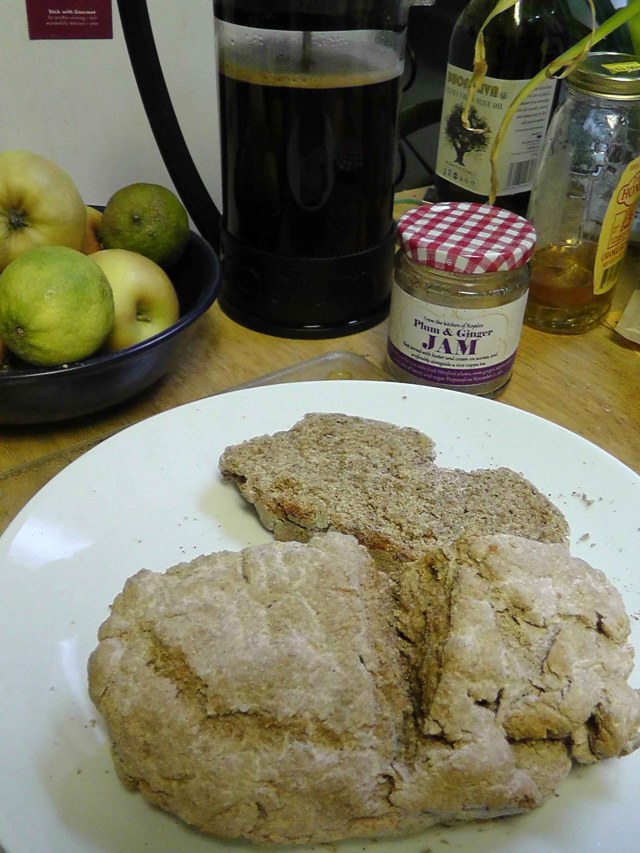 Here’s how I did it:

Measure three and a half cups of flour – white, or a mix of white and whole wheat, throw in some oatmeal if you like. I just had whole wheat so that’s what I used.

Add 1 tsp baking soda and 1 tsp salt to the flour. Sieve to mix.

Measure 2 cups of buttermilk or soured milk. I had neither, so I did what I was taught to do when I was knee-high to a grasshopper – add 1 tsp vinegar to 2 cups fresh milk and leave for a few minutes to sour – do it while you’re sieving the flour.

Add the milk to the flour, a little at a time, mixing with your fingers. No need to be too thorough, you don’t want a smooth dough, it should be squishy but raggy and floury in parts, with just enough moisture to push it all together into a big lump – I didn’t use the whole 2 cups, it depends on the  flour you use. Turn it out onto a floured surface, knead for about 15 seconds and shape into a round loaf.

Place on a floured baking tray, cut a fairly deep cross in the top of the loaf (about half the depth of the loaf) and bake in the oven for 40-45 minutes.

To see if it’s done, flip it over and knock on the bottom of the loaf. If it sounds hollow, it’s ready. For a softer crust, wrap it in a teatowel right out of the oven; for a crispy crust (you’ll need strong teeth), let it cool on a wire rack.

Hi there! I’m Ailsa Prideaux-Mooney. I’ve lived in many places, and travelled to many more. I had a lot of fun getting there and being there, wherever there happened to be at the time. I climbed a castle wall in Czesky Krumlov, abseiled down cliffs to go caving in the west of Ireland, slept on the beach in Paros, got chased by a swarm of bees in Vourvourou (ok that wasn’t fun, but it was exciting), learned flower arranging in Tokyo, found myself in the middle of a riot in Seoul, learned to snowboard in Salzburg, got lost in a labyrinth in Budapest and had my ice cream stolen by a gull in Cornwall. And I’m just getting started. If you’ve enjoyed what you’ve read so far, I’d love you to follow my travelogue - wheresmybackpack.com - and remember, anyone who tries to tell you it’s a small world hasn’t tried to see it all.
View all posts by ailsapm →
This entry was posted in Ireland, Photography, Travel and tagged food, photography, photos, postaday, travel. Bookmark the permalink.