The Spike and other Dublin meeting places

I must confess a slight obsession with The Spire of Dublin (officially The Monument of Light – An Túr Solais) that stands in the middle of O’Connell Street, where Nelson’s Pillar used to stand in the days before I was even a twinkle in my father’s eye. It is essentially a massive stainless steel cone-like structure, just shy of 400 feet high, and is billed as the world’s tallest sculpture. At its base it is about 10 feet in diameter, narrowing to just under 6 inches in diameter at the top. It is a huge, modern statement – the only problem being, I’m not quite sure what that statement is.

During my recent Christmas trip to Dublin, I seemed to end up in the vicinity of the Spire on most days whilst on my way somewhere else. It is hard to avoid, that massive structure looms large over almost everything else around it. It can even be seen clear across town, competing with the Wellington Monument in the Phoenix Park.

I quite like the base of the monument, highly polished with eye-catching patterns, and from some angles – especially looking south along O’Connell Street, it is quite lovely in its entirety, although I could do without the naff illumination at the top. 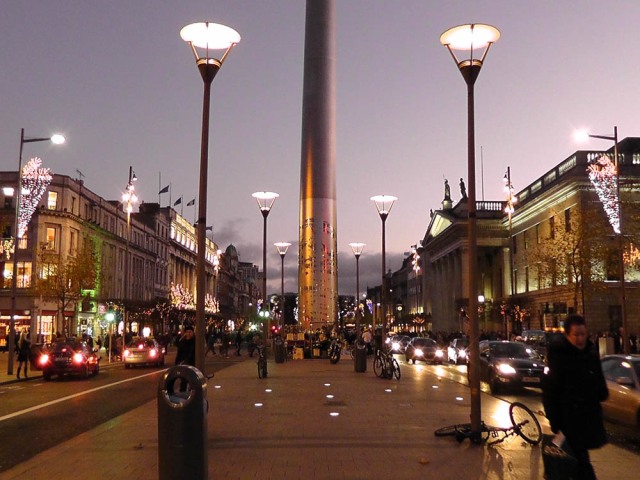 The polished base of the Spire of Dublin

However, it does seem to be like the playground bully, overpowering just about everything in its wake. Poor Jim Larkin appears to have been positively skewered by it. 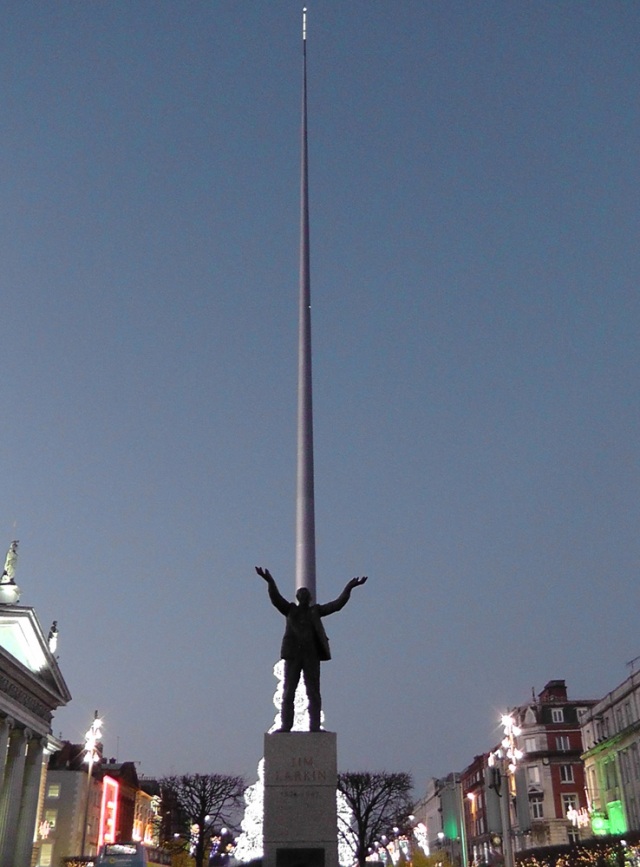 No wonder the poor man has thrown his arms up in despair. 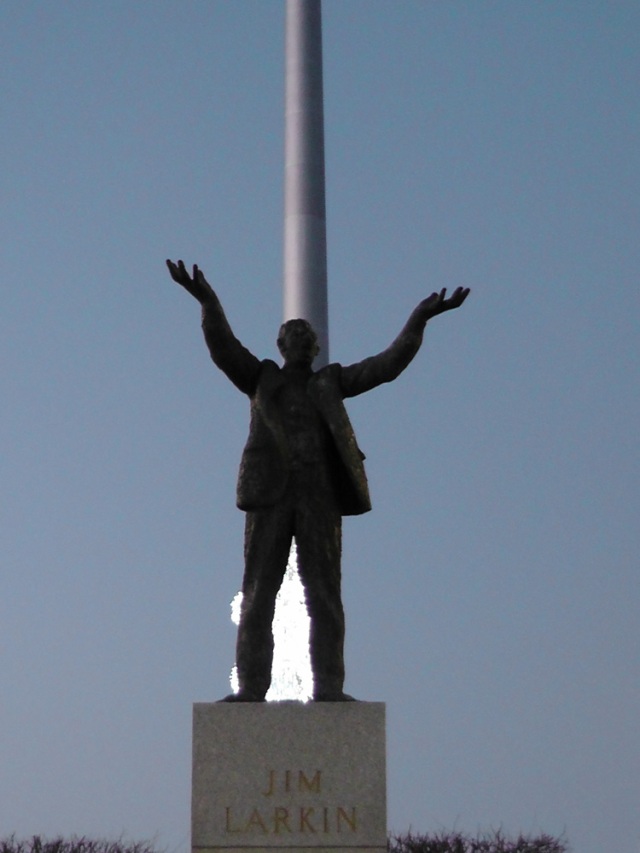 Sir John Gray has fared better, avoiding the skewering, but sporting a rather painful looking electric needle from the crown of his head. 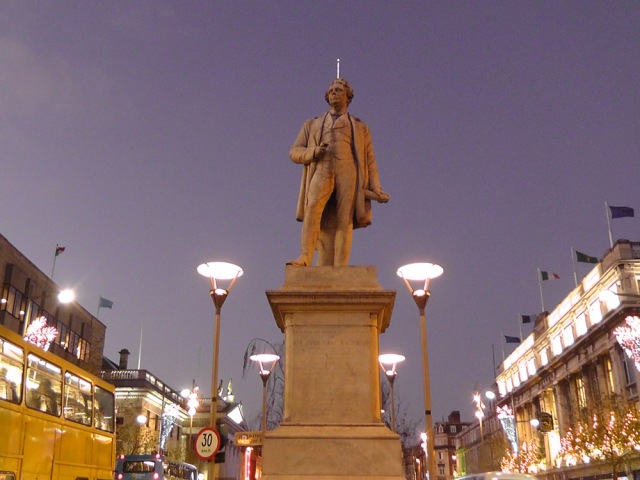 There was apparently quite a hullaballoo made when this monument first showed its face on O’Connell Street in early 2003. I have yet to find a Dubliner who cares for it, and many of them refer to it as The Spike, a rather more utilitarian name than the lofty ‘Spire’ that it is officially named. Here are some other names I have heard for it.

The Rod to God

The Stiffy at the Liffey

The Erection at the Intersection (my favourite)

The Nail in the Pale

The Stiletto in the Ghetto

The Pin in the Bin 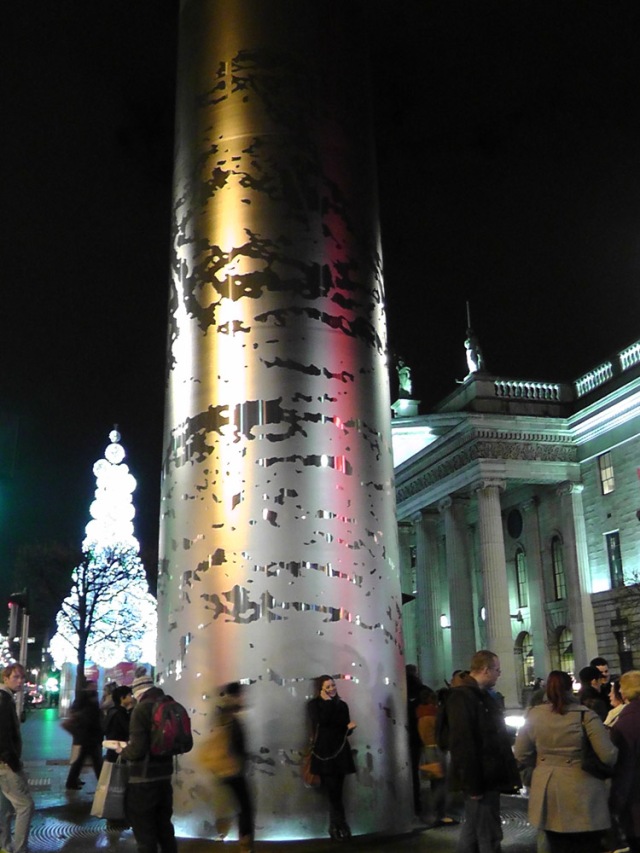 Meet me at the Spire

Meet me under the Eason's clock

Mind you, more often than not, my meeting spot of choice was Bewley’s on Grafton Street. It is still there, and I ventured in to have a look around and have a coffee, despite the milling crowds. It has been reborn, like a phoenix from the ashes, albeit without some of the old favourites, like the Mary cake, a request for which drew puzzled looks from the staff. I was sad to discover that the downstairs cafe, which was one of my favourite places with all its nooks and crannies, is no more. Bewley’s is, however, still a lovely, atmospheric refuge from the bustle of Grafton Street and the coffee is still delicious. 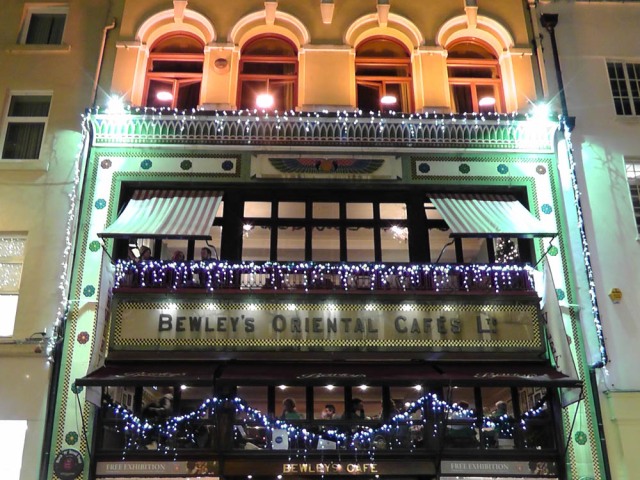 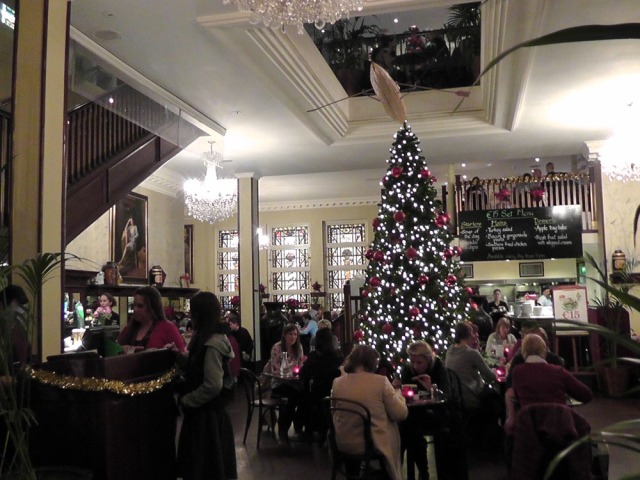 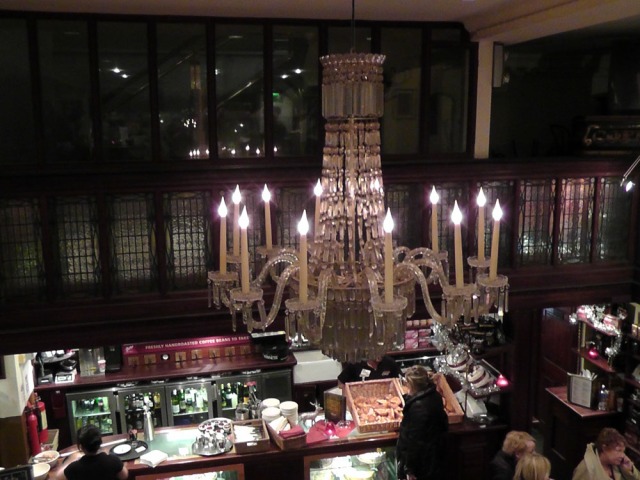 One last meeting place of note from my years in Dublin was Toner’s pub on Baggot Street. I spent many an evening, night and early morning in this age-old pub, which used to be frequented by literary greats such as Kavanagh and Yeats, but that is a story for another time.

Hi there! I’m Ailsa Prideaux-Mooney. I’ve lived in many places, and travelled to many more. I had a lot of fun getting there and being there, wherever there happened to be at the time. I climbed a castle wall in Czesky Krumlov, abseiled down cliffs to go caving in the west of Ireland, slept on the beach in Paros, got chased by a swarm of bees in Vourvourou (ok that wasn’t fun, but it was exciting), learned flower arranging in Tokyo, found myself in the middle of a riot in Seoul, learned to snowboard in Salzburg, got lost in a labyrinth in Budapest and had my ice cream stolen by a gull in Cornwall. And I’m just getting started. If you’ve enjoyed what you’ve read so far, I’d love you to follow my travelogue - wheresmybackpack.com - and remember, anyone who tries to tell you it’s a small world hasn’t tried to see it all.
View all posts by ailsapm →
This entry was posted in Ireland, Photography, Travel and tagged christmas, holidays, humor, photography, photos, pictures, postaweek2012, travel, writing. Bookmark the permalink.

8 Responses to The Spike and other Dublin meeting places