Change of country, change of pace. I’ve swapped the warm humidity of northern Guatemala for the cold rain of Dublin; the 4am shuttle buses for late starts on DART trains; the new and unfamiliar for the familiar of years gone by.

I haven’t done the whole ‘home for the holidays’ thing in a very long time. I have distant memories of flying back into Dublin from Germany one year, with piped Christmas music filling the airplane, and as Dublin airport came into sight, the window-seated passengers saw the words ‘Welcome Home’  printed in big letters on the airport roof and it was passed around the cabin like wildfire. I watched, intrigued, as an entire plane-load of Irish emigrants got very emotional very quickly. Presumably they all moved back at the height of the Celtic Tiger when there was employment once again in Ireland. I never did.

This time, there was no ‘Welcome Home’ on top of the airport. My Delta flight touched  down smoothly on an overcast and rainy morning and I cursed the fact I’d forgotten to pack rain gear. What was I thinking? First purchase – an umbrella.

Dublin has changed dramatically from the Dublin of my childhood. It’s odd but also thrilling to wander around and feel like a stranger in a strangely familiar place. Things are the same and different all at once. The street vendors of Moore Street have now spilled out onto Henry Street; their singsong refrains still sound out, but now they’re singing out Euro amounts instead of punts and pence. Bewley’s Coffee Shop was there, then it was gone, now it’s back, or something – I’m not quite sure how the story went, but the Bewley’s on Grafton Street is still filled to overflowing with people. I didn’t venture in as it was too busy, so I cannot say whether or not they still serve the things they did in years gone by, like their much-loved Mary cakes. The GPO still stands proudly on O’Connell Street, but now it competes with The Spire – officially An Túr Solais (monument of light) – a stainless steel pin-like structure almost 400ft in height. The Ha’penny Bridge lives on, but there are shiny new bridges across the Liffey everywhere, including a fabulous harp-shaped Beckett’s Bridge down by the snazzy new Convention Centre on the Quays. I’m having fun exploring this ancient but very new city of my childhood. I’m also getting rained on. A lot. Here are some photos of the Dublin of today.

Beckett Bridge with the Convention Centre in the background

Walking along the Quays at night

The Customs House lit up at night

The Famine Boat; a shadowy figure on the Liffey

The top of Grafton Street

Johnson's Court off Grafton Street, all lit up for Christmas

The entrance to Stephen's Green

Feeding the swans in Stephen's Green 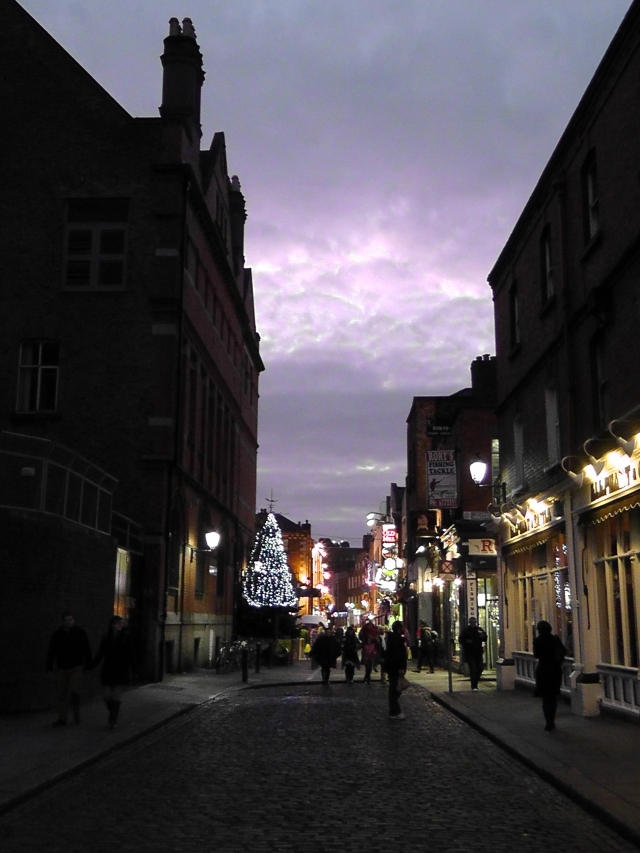 Temple Bar as the light starts to fade

Waiting to cross the street to the Ha'penny Bridge 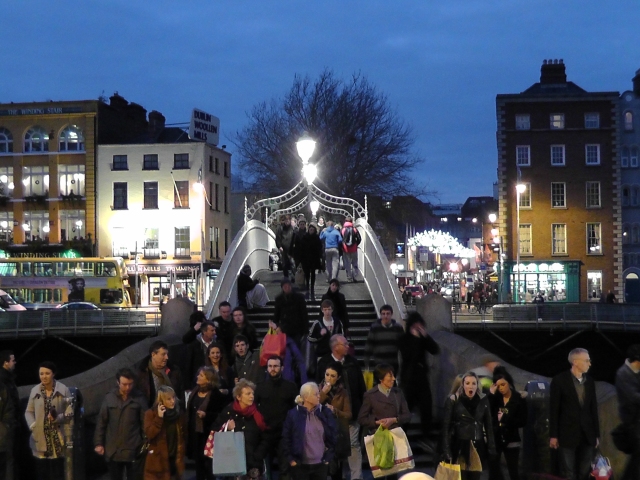 Merchant's Arch leading to Temple Bar from the Ha'penny Bridge 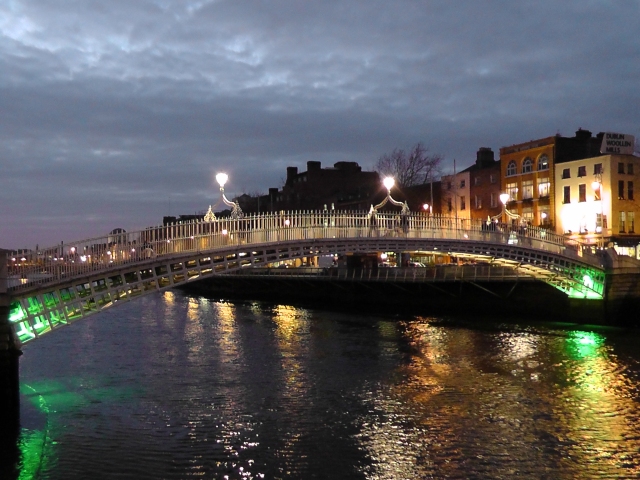 Ha'penny Bridge in the twilight 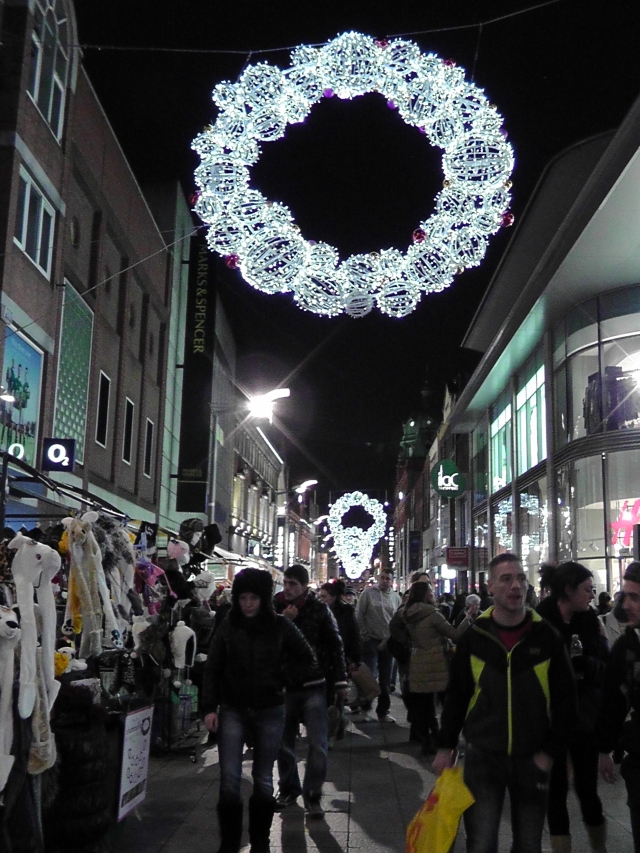 Street vendors line one side of Henry Street 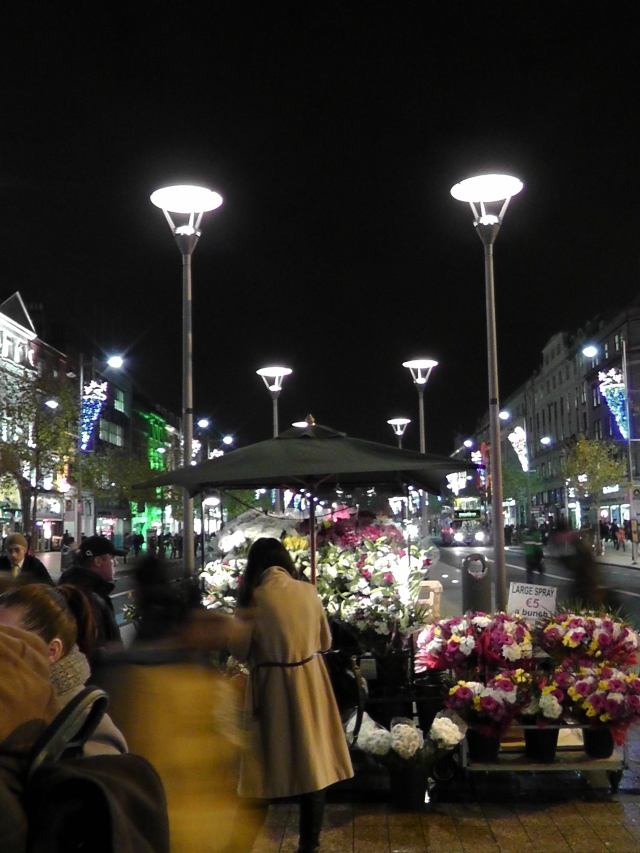 The Spire competing with the GPO and a Christmas tree

The GPO, the tree and the Spire

Hi there! I’m Ailsa Prideaux-Mooney. I’ve lived in many places, and travelled to many more. I had a lot of fun getting there and being there, wherever there happened to be at the time. I climbed a castle wall in Czesky Krumlov, abseiled down cliffs to go caving in the west of Ireland, slept on the beach in Paros, got chased by a swarm of bees in Vourvourou (ok that wasn’t fun, but it was exciting), learned flower arranging in Tokyo, found myself in the middle of a riot in Seoul, learned to snowboard in Salzburg, got lost in a labyrinth in Budapest and had my ice cream stolen by a gull in Cornwall. And I’m just getting started. If you’ve enjoyed what you’ve read so far, I’d love you to follow my travelogue - wheresmybackpack.com - and remember, anyone who tries to tell you it’s a small world hasn’t tried to see it all.
View all posts by ailsapm →
This entry was posted in Ireland, Photography, Travel and tagged photography, photos, pictures, postaweek2011, travel, writing. Bookmark the permalink.

9 Responses to Christmas in Dublin