After the previous day’s adventure climbing Pacaya volcano, I was ready to see some volcano action. Cue the Fuego at Night adventure, a trip organised by a little homegrown operation in Antigua. A shuttle bus picked us up in Antigua in the late afternoon and we headed south towards Volcán de Fuego (volcano of fire – how appropriate). As dusk was falling, we pulled into a small coffee plantation at the base of the volcano. The bus stopped in a small plantation village for the workers and we tumbled out of the bus confused, as it seemed quite a long distance from the cone. I asked in tragically broken Spanish if we were to walk from here and our lovely tour organiser smiled a wicked smile and pointed to a tractor that was pulling out of a nearby farmyard, followed by a flatbed trailer. My initial reaction was “AWESOME!” I adore the unexpected!

Here comes the tractor - the blobs are volcanic ash

After the trailer was readied, we clambered up the ladder and settled ourselves on the little benches running along either side of the trailer. The guides then piled in bags and boxes and shoved mysterious wooden objects on the floor under our feet. The tractor revved and we were off up the mountain. I am reluctant to say we followed a road; it was more like we followed the bits where no trees were growing. It was the rockiest, bumpiest ride of my life and I loved every minute of it, squealing and squeaking and giggling uncontrollably as we flew off our seats and ended up in heaps on the floor, clinging onto the sides of the trailer for dear life as the tractor tore up the side of the volcano in the darkness. Health and safety commissions in the US or Europe would have had a conniption to see the shenanigans at work here. It was sooo much fun!

After what seemed like an eternity, the tractor pulled into a level clearing somewhere deep in the coffee plantation, perhaps a thousand metres lower in elevation than Fuego’s cone. The ladder was promptly produced and dishevelled and disoriented, we staggered out of the trailer onto solid ground. It felt a little as if we had been at sea in a tempest; taking us a little while to regain our land legs. The moon was shining brightly, almost full – we actually thought it was a full moon, it was so big and bright. 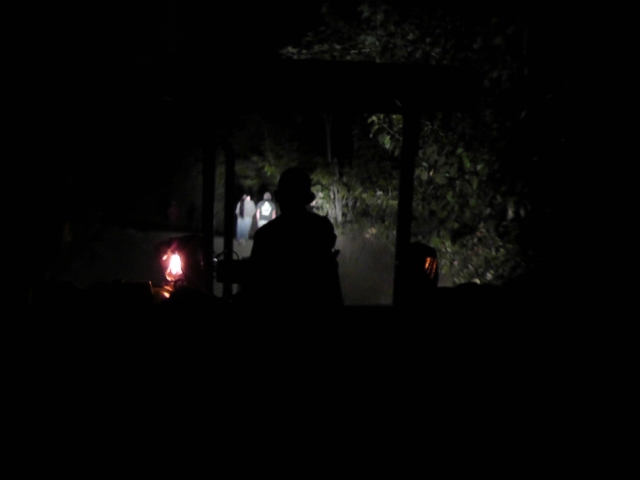 The tractor ride up the slopes

The guides bustled around us, pulling all kinds of objects out of the trailer, setting up chairs and benches for us to sit on as we gazed at the volcano, glowing ominously red in the dark of the night. As they were getting set up, bang, the first explosion happened, accompanied by a massive rumble. Everyone shot to attention, transfixed by the blistering red hot display of nature’s fireworks; collective gasps, oohs and aahs emanating from us all.

And so the night continued, the volcano erupting like clockwork at 25 minute intervals, with minor gurglings happening sporadically in between. My camera proved unworthy of the task of photographing the eruptions – the photos I took looked like I’d dropped a blob of ketchup on a black background – a better camera purchase is on the horizon…and another visit to Fuego in the near future. I am now an avid volcano fanatic. Our guides hovered around, offering nachos and terribly tasty banana bread to fortify us against the cold. They even had extra jackets with them if anyone needed extra insulation. 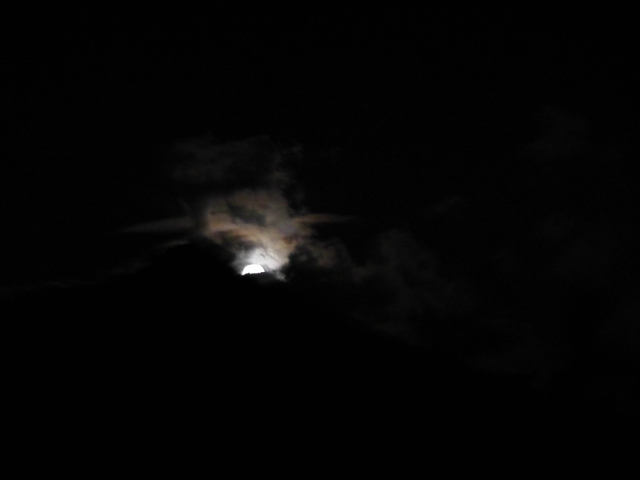 Big fail on getting a shot of the volcano erupting, so here's the moon peeping over a neighbouring volcano - taken during the bumpy ride so a little blurry.

And then it was time to head back. Another truckload of people arrived and settled onto the benches as we climbed into the newly arrived truck – this was a flatbed truck, with poles across the top of it to cling onto, so the braver of us, yes, including me, opted to stand on the benches and hold onto the overhead poles as we went careening down the steep slopes standing up – it added to the adrenaline rush. The main tour operator offered to let me stand up front (I think he could see how much I was enjoying it) so I swapped places with him and it was my job to yell out ‘incoming’ whenever we plummeted headlong into low-hanging branches so we could all duck down and not get smashed in the face.

Spooky moon through the trees

Just as we got to the bottom of the slope and were about to pull into the courtyard, one of the group let out a massive yell and we turned to see the most enormous eruption. Our tour operator yelled for the truck to stop and we watched as the lava streamed down the sides of the volcano. It was phenomemal.

Big fail on photographing the volcano, but I had to show you what it looked like, so here's a Wikimedia public domain photo of Fuego erupting

I cannot tell you how exhilarating and life-affirming this trip was. I have never felt more alive than I did in the hours we spent careening up and down the slopes and gasping at the force of nature that is Fuego. Please experience this for yourself if you are visiting Guatemala.

Hi there! I’m Ailsa Prideaux-Mooney. I’ve lived in many places, and travelled to many more. I had a lot of fun getting there and being there, wherever there happened to be at the time. I climbed a castle wall in Czesky Krumlov, abseiled down cliffs to go caving in the west of Ireland, slept on the beach in Paros, got chased by a swarm of bees in Vourvourou (ok that wasn’t fun, but it was exciting), learned flower arranging in Tokyo, found myself in the middle of a riot in Seoul, learned to snowboard in Salzburg, got lost in a labyrinth in Budapest and had my ice cream stolen by a gull in Cornwall. And I’m just getting started. If you’ve enjoyed what you’ve read so far, I’d love you to follow my travelogue - wheresmybackpack.com - and remember, anyone who tries to tell you it’s a small world hasn’t tried to see it all.
View all posts by ailsapm →
This entry was posted in Guatemala, Photography, Travel and tagged nature, photography, photos, pictures, postaweek2011, travel, writing. Bookmark the permalink.