I visited a coffee plantation this week on the outskirts of Antigua. Finca la Azotea is actually much more than a coffee plantation; it is a cultural centre with a coffee museum, a wonderful collection of Mayan instruments dating from pre-Columbian times and a very interesting presentation on the costumes and customs of neighbouring Antiguan villages. I was terribly proud of myself, because the tour was entirely in Spanish, and I managed to understand it, which is fun because I’ve never learned Spanish but was able to follow along due to the similarity to French, the bits of vocab I’ve picked up along the way and both of my tour guides’ excellent enunciation. Yes!

The plantation tour was pretty interesting, but halfway through the coffee trees our tour got interrupted by the appearance of the very charming plantation owner, Ricardo, who started chatting to us about work the Finca has been doing to help the local villagers. It was a fascinating conversation. He wasn’t hard on the eyes either. 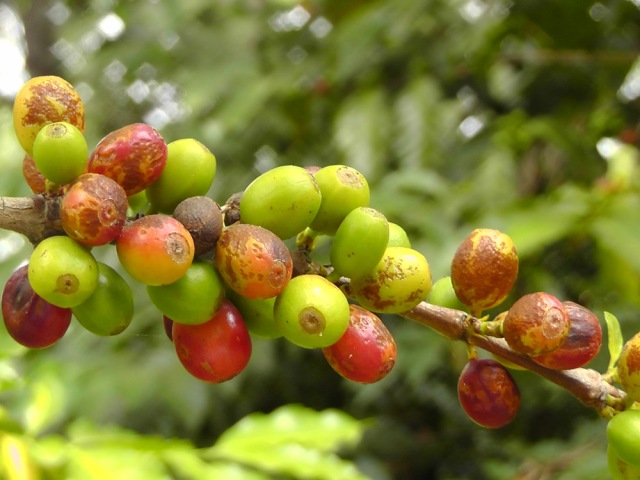 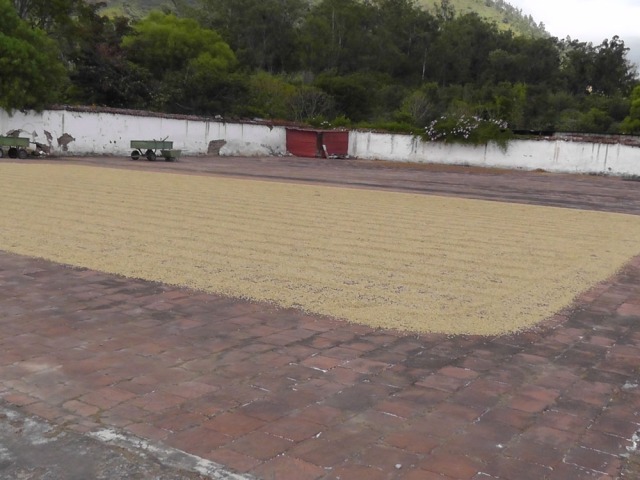 Coffee beans drying in the sun. 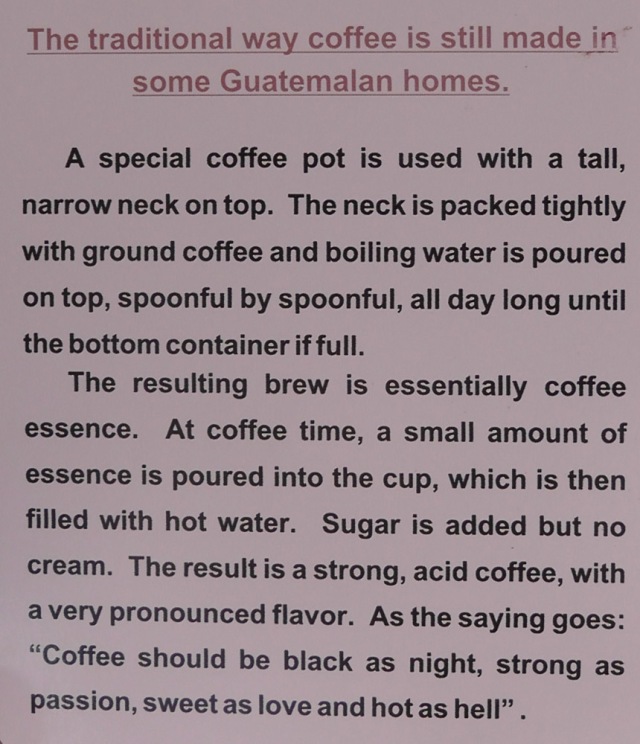 Ricardo departed and our poor tour guide finally got us back on track. We moved on to view the Mayan instruments. The oddest instrument they demonstrated was a horse-jaw which was played by hitting it so the teeth rattle. Not for the squeamish. I got distracted along the way by some fabulous masks depicting the devil, and seeing as it was December 7th, the day the whole of Guatemala celebrates La Quema del Diablo (The Burning of the Devil), I felt compelled to take some photographs. 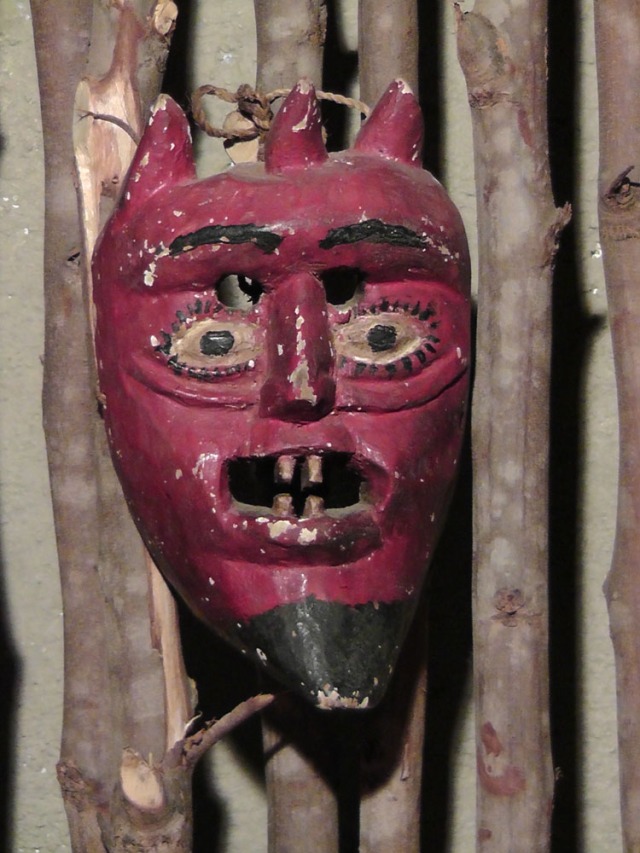 Later on that evening, I headed out with a bunch of friends to explore Antigua by night and see if we could catch any of the devilry afoot in the dark. We were too late to see the actual burning – which incidentally involves setting fire to an effigy of the devil bang smack between two petrol stations, who thought that one up? – but I caught a couple of households holding their own burning ceremonies outside their houses.

When we got to the festival spot there was nothing but ashes left of the devil, the burning waits for no-one, but the party was in full swing, with musicians taking the stage and  street vendors flogging glow-in-the-dark devil horns and candyfloss.

Party between the two gas stations 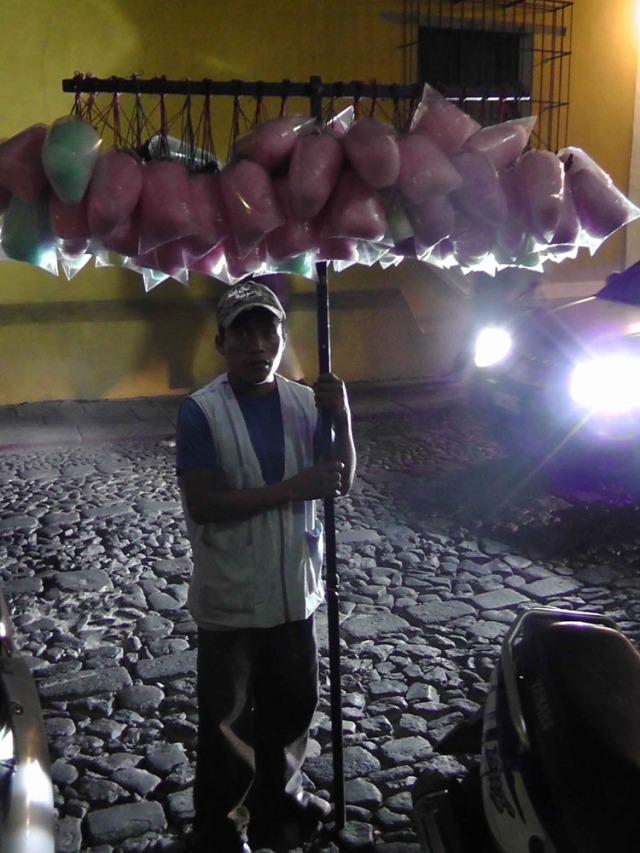 Wandering back after the celebrations, I took the opportunity to take in a few of Antigua’s landmarks by night. All in all, a pretty great day, even if the devil burned without me. 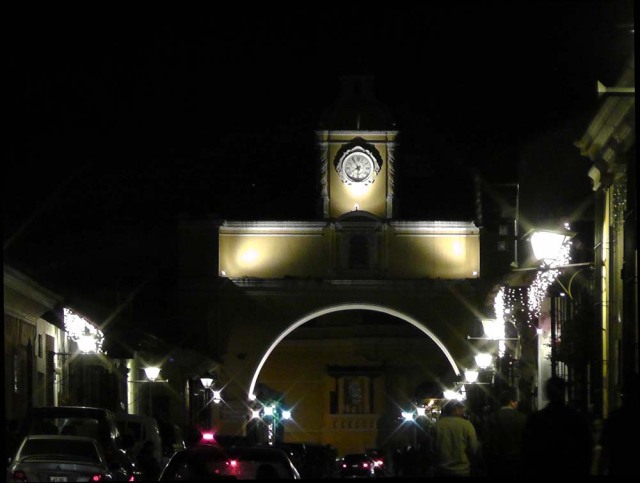 Hi there! I’m Ailsa Prideaux-Mooney. I’ve lived in many places, and travelled to many more. I had a lot of fun getting there and being there, wherever there happened to be at the time. I climbed a castle wall in Czesky Krumlov, abseiled down cliffs to go caving in the west of Ireland, slept on the beach in Paros, got chased by a swarm of bees in Vourvourou (ok that wasn’t fun, but it was exciting), learned flower arranging in Tokyo, found myself in the middle of a riot in Seoul, learned to snowboard in Salzburg, got lost in a labyrinth in Budapest and had my ice cream stolen by a gull in Cornwall. And I’m just getting started. If you’ve enjoyed what you’ve read so far, I’d love you to follow my travelogue - wheresmybackpack.com - and remember, anyone who tries to tell you it’s a small world hasn’t tried to see it all.
View all posts by ailsapm →
This entry was posted in Guatemala, Photography, Travel and tagged photography, photos, pictures, postaweek2011, travel, writing. Bookmark the permalink.
%d bloggers like this: