It was my first full day in Guatemala – not counting arrival day which involved a lot of hurrying up and waiting for shuttles to get from Guatemala City to Antigua just in time to see a glorious sunset behind the Volcán de Agua (so named as the crater used to be filled with water until an earthquake caused a crack in the rim, creating a mudslide that obliterated Santiago de los Caballeros.) I decided to explore Antigua, so walked out the front door with a friend and promptly ran into two guys wanting to know if this was a nice area to live. It turns out one chap was from Guatemala and the other from the US – they’d met in college in the States and now the US guy was moving to Guatemala with the help of his friend. We struck up a great conversation and our new-found friends spent the entire day showing us the town, helping us set up day trips and giving us advice about places to see. What a stroke of luck we had running into them; you couldn’t hope to meet nicer people. I simply adore this aspect of travel – those chance encounters that can create something unforgettable. We wandered through the cobblestone streets to perhaps the most famous view of Antigua: 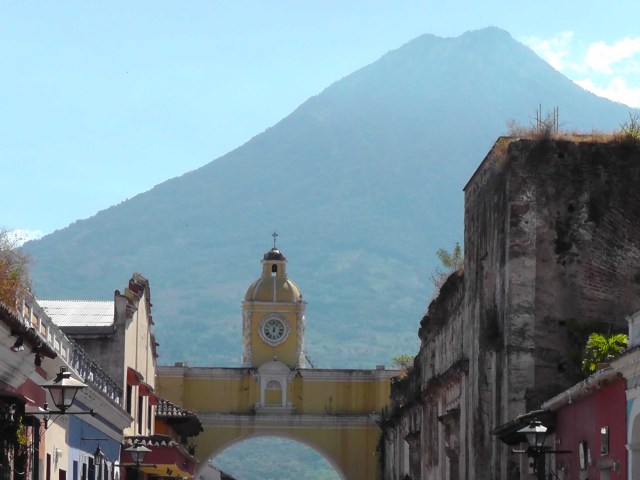 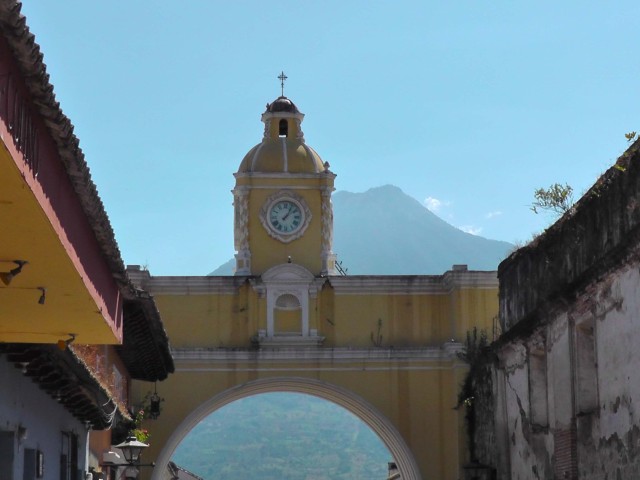 As we hadn’t had breakfast yet, we ambled back towards Parque Central (New York, you’re not the only place to have a Central Park!) and popped into a cute little cafe for coffee and a bite to eat. 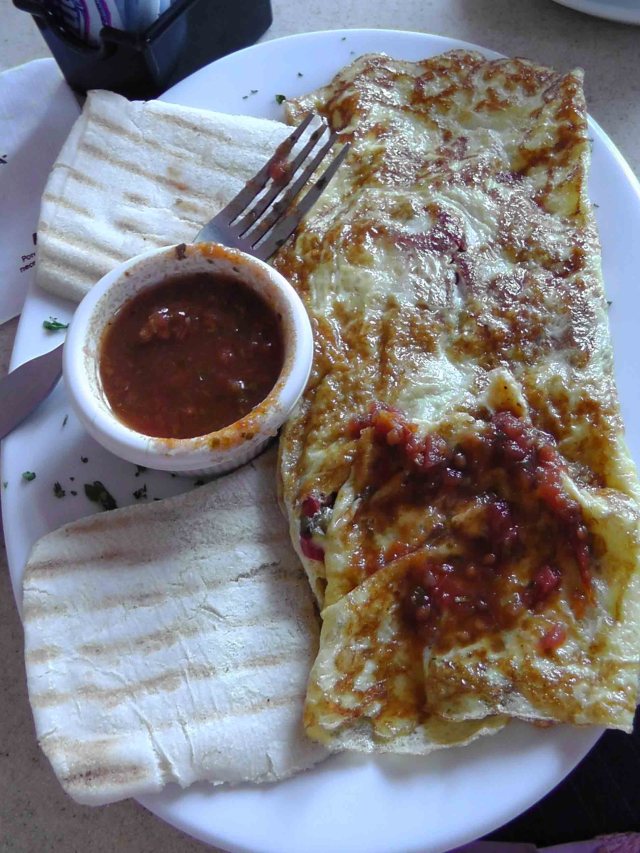 Crazily delicious veggie omelette with sizzlingly hot salsa and the best bread ever!

While we were eating, all kinds of crazy stuff was happening in the streets outside. Crowds laughing and cheering, the whizzes and loud pops of fireworks – day and night, every day, you can hear the sounds of fireworks, it’s a daily occurrence here – I have become accustomed to the ear-shattering bangs surprisingly quickly.

This chap was hilarious, and I just love the expressions on the kids' faces as he prepares to eat fire. 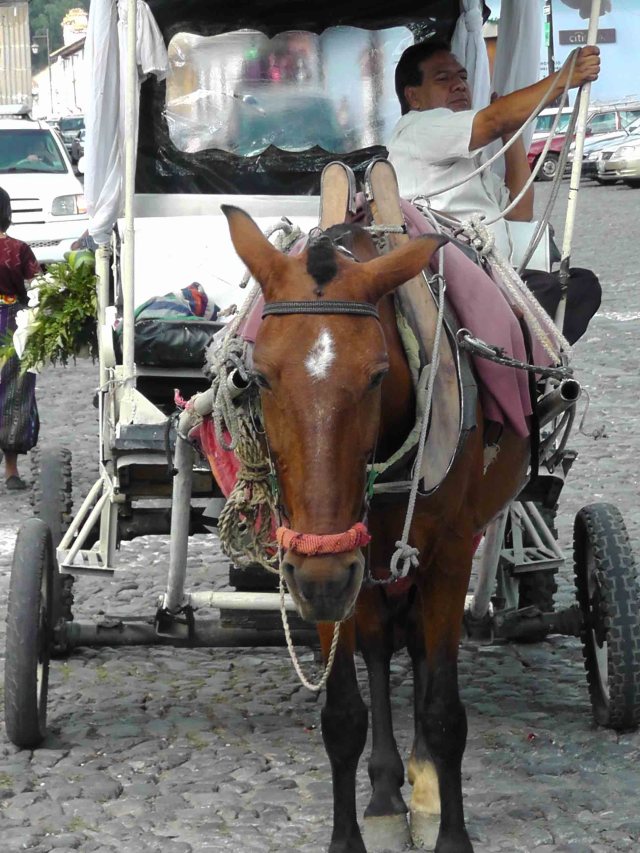 Horse and buggy outside Parque Central

Beautiful fountain in the centre of Parque Central.

Fortified, we set forth again, to visit some stunning buildings, including the intricately ornate La Merced Church and the ruined monastery at Casa Santo Domingo. The ruined monastery is a popular place to get married, and as luck would have it they were preparing for a wedding ceremony and we got to wander around and look at things before the ceremony got started.

The colours and texture of the fabric are wonderful, quite a contrast to the stone grey cathedrals of Europe.

Delicate mosaic running along the walls of the church

Outside La Merced. I love the moss and grasses growing on this ancient cross

Soaring tent creates an indoor wedding space out of the ruins of Santo Domingo monastery. 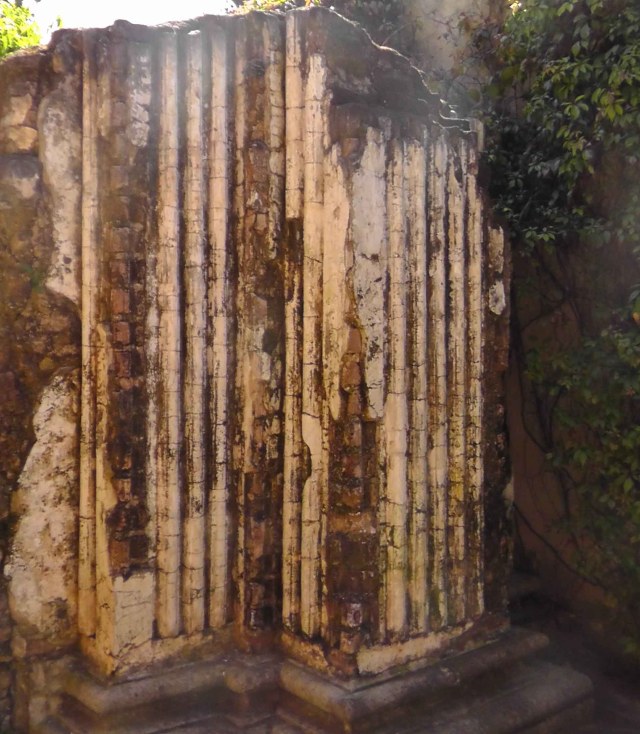 This is where the blushing bride was scheduled to enter before walking down the aisle.

Spectacular spiral cascade of bells waiting to peal at the conclusion of the wedding ceremony.

These chaps were just hanging out at the Casa Santo Domingo monastery.

Bronze of Efrain Recinos, architect, sculptor, all round renaissance man. He passed away Oct 2nd 2011. RIP 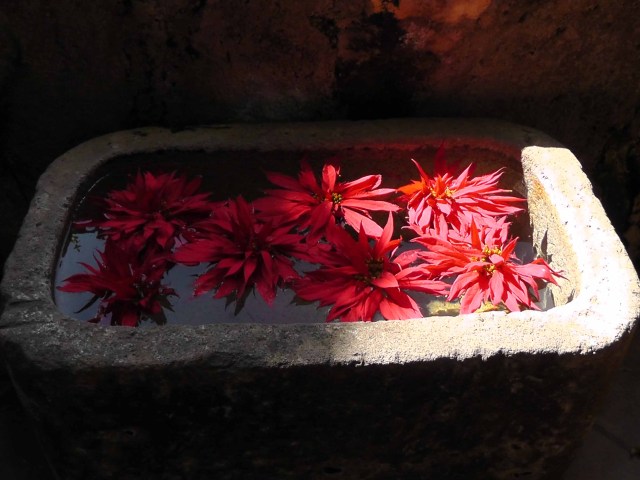 Useful hint, when your indoor tree grows too big for your house, just make a hole in the roof.

We also took time to check out the street markets and little shops peppered along the streets, and happened across the outdoor holding yard for the statues that are part of the Easter celebrations. 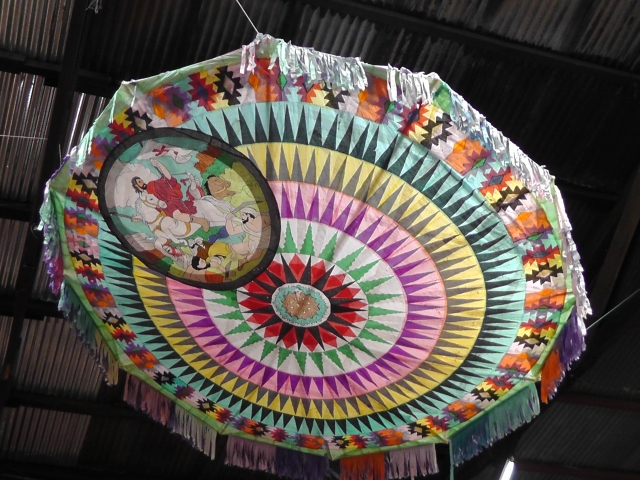 Massive kites decked with religious iconography are flown to reach the heavens.

Gathering round for the Last Supper 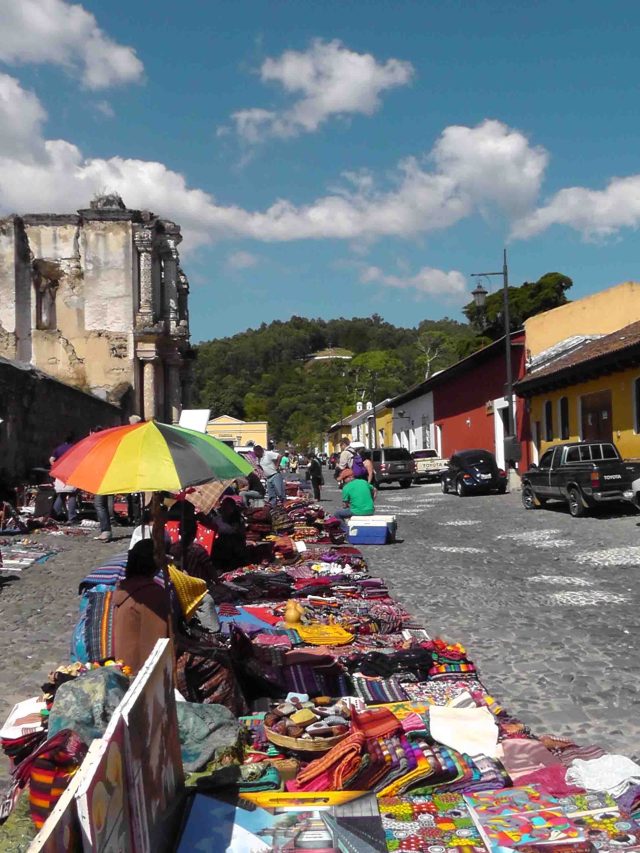 Colourful street market with ruins in the background.

A group of drunkard gods waiting for a lit cigarette.

The town is filled with gorgeous fountains of all shapes and sizes and right now, some interesting Christmas decorations.

In a courtyard at Casa Santo Domingo

Speaking of chocolate, my first purchase at a Guatemalan market – oh, yeah. Delicious disks of coarsely ground cacao mixed with brown sugar – traditionally broken up and melted in hot milk, but equally delicious broken up and eaten in pieces.

Not a bad first day, really, wouldn’t you agree?

Hi there! I’m Ailsa Prideaux-Mooney. I’ve lived in many places, and travelled to many more. I had a lot of fun getting there and being there, wherever there happened to be at the time. I climbed a castle wall in Czesky Krumlov, abseiled down cliffs to go caving in the west of Ireland, slept on the beach in Paros, got chased by a swarm of bees in Vourvourou (ok that wasn’t fun, but it was exciting), learned flower arranging in Tokyo, found myself in the middle of a riot in Seoul, learned to snowboard in Salzburg, got lost in a labyrinth in Budapest and had my ice cream stolen by a gull in Cornwall. And I’m just getting started. If you’ve enjoyed what you’ve read so far, I’d love you to follow my travelogue - wheresmybackpack.com - and remember, anyone who tries to tell you it’s a small world hasn’t tried to see it all.
View all posts by ailsapm →
This entry was posted in Guatemala, Photography, Travel and tagged blogging, photography, photos, pictures, postaweek2011, travel, writing. Bookmark the permalink.